Families who usually reunite on Christmas over a hearty, lingering meal celebrated apart Friday, services shifted online and gift exchanges were low-key in one of the most unusual holiday seasons in modern history.

The coronavirus left almost no one unaffected.

Patricia Hager, 60, delivered homemade caramel rolls for breakfast to relatives and friends in Bismarck, N.D., a state that initially was mostly spared in the pandemic but now has been hit hard. It seemed every time she opened her door this holiday season, someone had left smoked salmon, baskets of nuts or cookies for her.

“This year Christmas love is expressed at the door,” she said. “I’m glad that people will probably be with us next year with the vaccines. I can give up anything for that.”

With a child due in February, Song Ju-hyeon of Paju, South Korea, near Seoul, said home is the only place she feels safe right now. The government reported 1,241 new cases Friday, a new daily high for the country.

“It doesn’t feel like Christmas anyway. There’s no carols being played on the streets,” she said.

“It’s Christmask,” the Daily Nation newspaper declared in Kenya, where a surge in cases led to doctors ending a brief strike on Christmas Eve. Celebrations were muted in the East African hub as a curfew prevented overnight church vigils.

In the Vatican, Pope Francis issued a Christmas Day plea for authorities to make covid-19 vaccines available to all, insisting that the first in line should be the most vulnerable and needy, regardless of who holds the patents for the medication.

Bells rang out around Bethlehem as the traditional birthplace of Jesus marked the holiday. But the closure of Israel’s international airport to foreign tourists, along with Palestinian restrictions banning intercity travel in the areas they administer in the Israeli-occupied West Bank, kept visitors away.

[Video not showing up above? Click here to watch » https://www.youtube.com/watch?v=MtEyW3AYxNQ]

With economies reeling around the world, it wasn’t a year of lavish gifts. Robin Sypniewski of Middlesex County, N.J., was furloughed twice from her job serving school lunches and is now on reduced hours. Her husband retires next week as a trash collector and her daughter is wrestling with student debt.

Sypniewski, 58, bought her daughter pajamas, compared with a diamond bracelet last Christmas. Her husband got a $20 plaque describing his Polish heritage, compared with a tablet computer last year.

“The bills have to be paid this month and next month. With the reduced hours, it’s tough,” she said.

In Sao Paulo, Brazil, taxi driver Dennys Abreu, 56, worked in the vast city overnight to cover the $300 monthly payment on his car, which he bought after losing a construction job. An estimated 14 million Brazilians are jobless.

“All I can do is to work as much as I can, get by and hope this d* virus disappears next year,” he said.

Meanwhile, a lot of church services shifted online. The Catholic Archdiocese of Los Angeles celebrated five Masses at the Cathedral of Our Lady of the Angels, with attendance capped at 130 people rather than having as many as 3,000. All of the Masses were live-streamed.

The Chapel of the Cross in Chapel Hill, N.C., had five services, but in-person attendance was capped at 25 people rather than 2,000. A Christmas Eve pageant was recorded and shown online.

“I have to remember that Christians have been celebrating Christmas for hundreds of years in all sorts of circumstances,” said the Rev. Elizabeth Marie Melchionna, the church rector. “Some of the external appearances are different, and yet the essence remains the same. What has not changed is that essential longing and celebration for love that is born at Christmas.”

Accompanied by an acclaimed cellist and a rented organ, the singers performed beneath the cathedral’s stained-glass windows in the darkened church. The choir initially planned to have 20 singers but for safety reasons was limited to eight.

The choir members stood socially distanced to be able to take off their masks. The concert — including “Silent Night” in English and French, “The Hymn of the Angels” and “Jingle Bells” — was recorded earlier this month and broadcast just before midnight Thursday.

TOO SAD TO REVEL

Grief prevailed among families of more than 1.7 million people worldwide killed by the virus and roughly 80 million infected.

Margarita Reyes, 60, is among four people in her house to get the virus in Calexico, Calif., near the Mexican border. Her 69-year-old husband died within three weeks of becoming ill, and her 35-year-old daughter has been on an oxygen device for five months. They were too sad to celebrate in any way, Reyes said.

Gallery: Christmas around the world

Suzanne Rose of Raleigh, N.C., delivered homemade spaghetti to the doorstep of her quarantined daughter, a restaurant manager who was exposed to the virus at work. Her son, a firefighter, has also been exposed.

“The air went out of the balloon” without her children at Christmas, she said. A video chat was no substitute for watching movies with them and her husband.

In England, border closures and bottlenecks foiled some plans. Thousands of drivers were stranded in their trucks at the English port of Dover, lacking the coronavirus tests that France demands they receive amid rising concern about a new variant of the coronavirus. A British military unit and French firefighters were brought in to help speed up the testing, and free food was distributed.

With Colombia closing its borders to prevent the virus from spreading, Venezuelan migrants couldn’t go home for the holidays. Yakelin Tamaure, a nurse who left economically wracked Venezuela two years ago, wanted to visit her mother, who is nursing a broken foot.

“I try to send her money, but it’s not the same as being there,” she said.

Still, many people took the pandemic restrictions in stride.

A pre-pandemic Christmas in Ann Arbor, Mich., for Kristin Schrader, 53, meant hosting a big dinner with appetizers for her brother who visits from Denver, her parents, who live in town, and friends who drop by. This year, she opted for a socially distant outing with her husband and 13-year-old daughter to watch a man dressed as Santa Claus canoe down the frigid Huron River with his dog. A low-key fondue dinner was also on the agenda.

“It’s just really hard when you’ve all been sitting in the same house to muster up a lot of excitement for the three of us when we’re just staring at each other for months and months on end,” she said.

The 70 residents at St. Peters, a nursing home in the northern Spanish town of El Astillero, held video chats or 30-minute visits with family members, separated by a plastic-glass wall.

“This terrible thing has come to us, so we must accept it and deal with it with patience,” said Mercedes Arejula, who met with her mother.

The nursing home allowed only one relative inside. A granddaughter blew kisses from outside.

“Vaccines for everybody, especially for the most vulnerable and needy,” who should be first in line, Pope Francis said in off-the-cuff remarks from his prepared text, calling the development of such vaccines a “light of hope” for the world.

“We can’t let closed nationalisms impede us from living as the true human family that we are,” the pope said.

He called on the leaders of nations, businesses and international organizations to “promote cooperation and not competition, and to search for a solution for all.”

Amid a surge of infections this fall in Italy, Francis broke with tradition for Christmas. Instead of delivering his “Urbi et Orbi” speech — Latin for “to the city and to the world” — outdoors from the central loggia of St. Peter’s Basilica, he read it from inside a cavernous hall at the Apostolic Palace, flanked by two Christmas trees with blinking lights.

Normally, tens of thousands of people would have crowded into St. Peter’s Square to receive the pope’s Christmas blessing and listen to his speech. But Italian measures to rein in holiday infections allow people to leave their homes on Christmas Day only for urgent reasons like work, health, visits to nearby loved ones or exercise close to home.

The pandemic’s repercussions on life dominated Francis’ reflections on the past year.

“At this moment in history, marked by the ecological crisis and grave economic and social imbalances only worsened by the coronavirus pandemic, it is all the more important for us to acknowledge one another as brothers and sisters,” Francis said.

Fraternity and compassion applies to people “even though they do not belong to my family, my ethnic group or my religion,” he said.

Francis prayed that the birth of Jesus would inspire people to be “generous, supportive and helpful” to those in need, including those struggling with “the economic effects of the pandemic and women who have suffered domestic violence during these months of lockdown.”

Noting that the “American continent” was particularly hard-hit by covid-19, he said the pandemic compounded suffering, “often aggravated by the consequences of corruption and drug trafficking.” In particular, he cited the suffering of the Venezuelan people.

On a day when Christians recall Jesus as a baby, Francis drew attention to the “too many children in all the world, especially in Syria, Iraq and Yemen, who still pay the high price of war.”

Among others, he said, who sorely needed comfort at Christmas time were the Iraqi people, and “in particular the Yazidi, hard-hit by the last years of war.” And, he said, “I cannot forget the Rohingya people,” adding that he hoped that Jesus, “born poor among the poor, will bring hope in their suffering.”

​​​​​Information for this article was contributed by Elliot Spagat, Frances D’Emilio and staff members of The Associated Press. 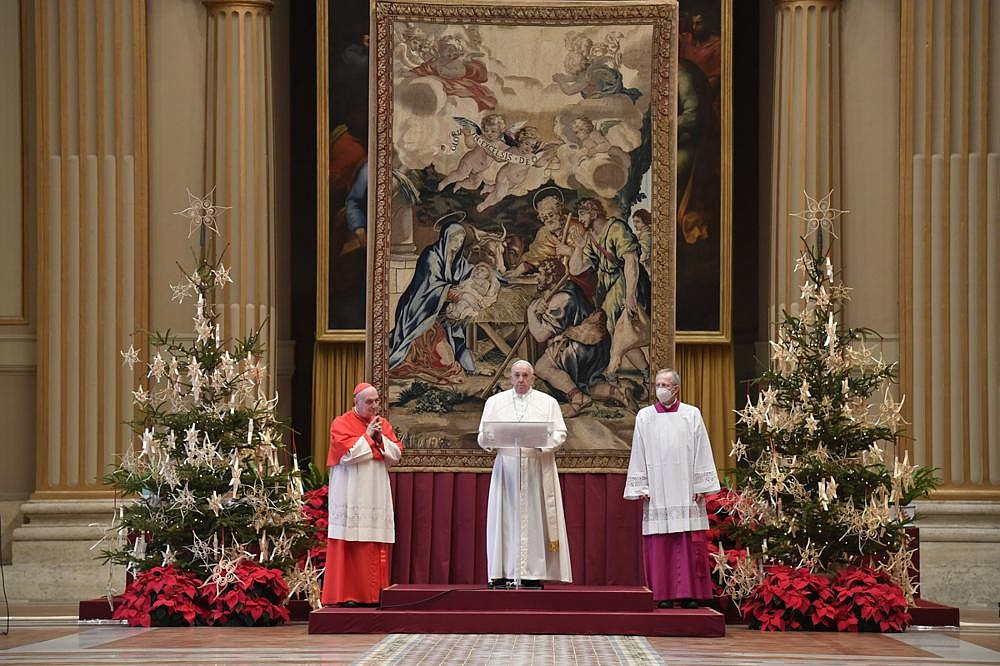 Pope Francis (center) delivers the Urbi et Orbi (Latin for ‘to the city and to the world’) Christmas Day blessing in the blessing hall of St. Peter’s Basilica at the Vatican. More photos at arkansasonline.com/1226noel/
(AP/Vatican Media) 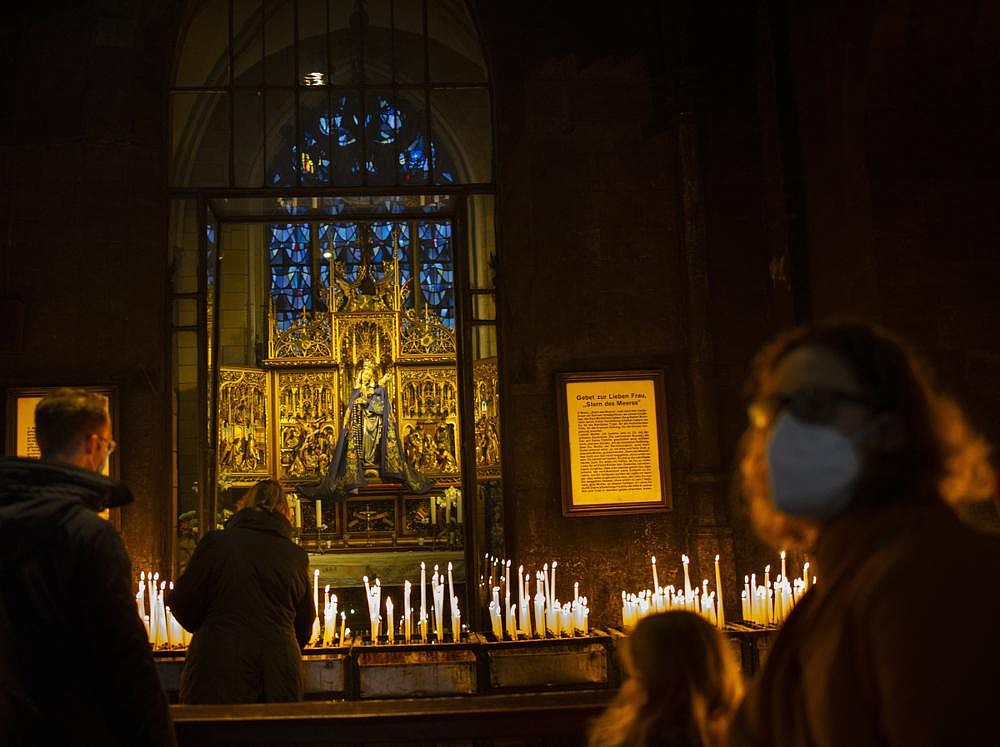 Worshippers offer prayers and light candles on Christmas Day at the Basilica of Our Lady in Maastricht, Netherlands.
(AP/Peter Dejong) 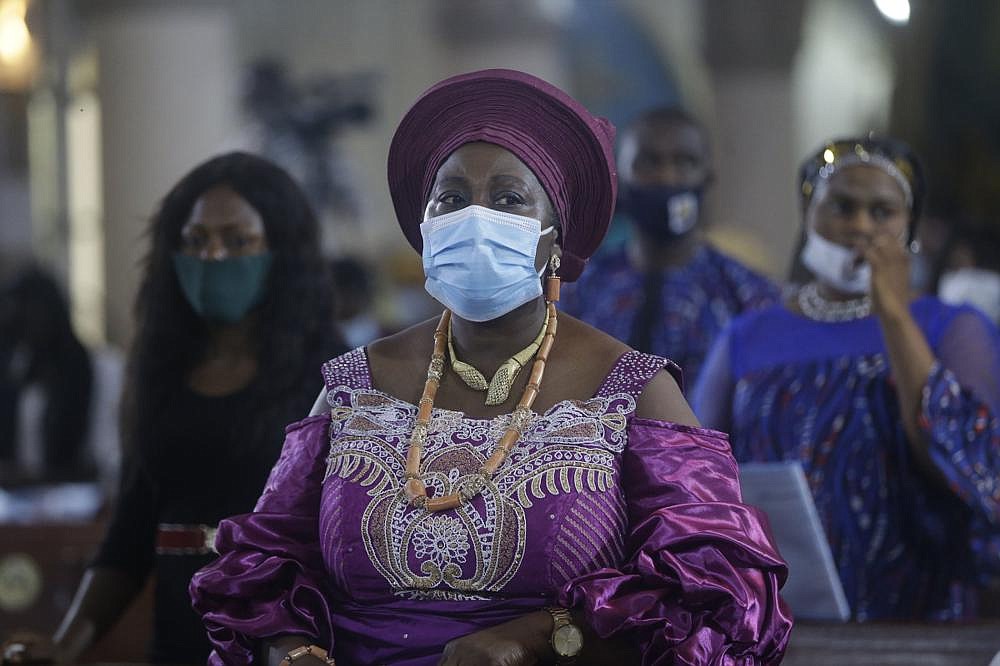 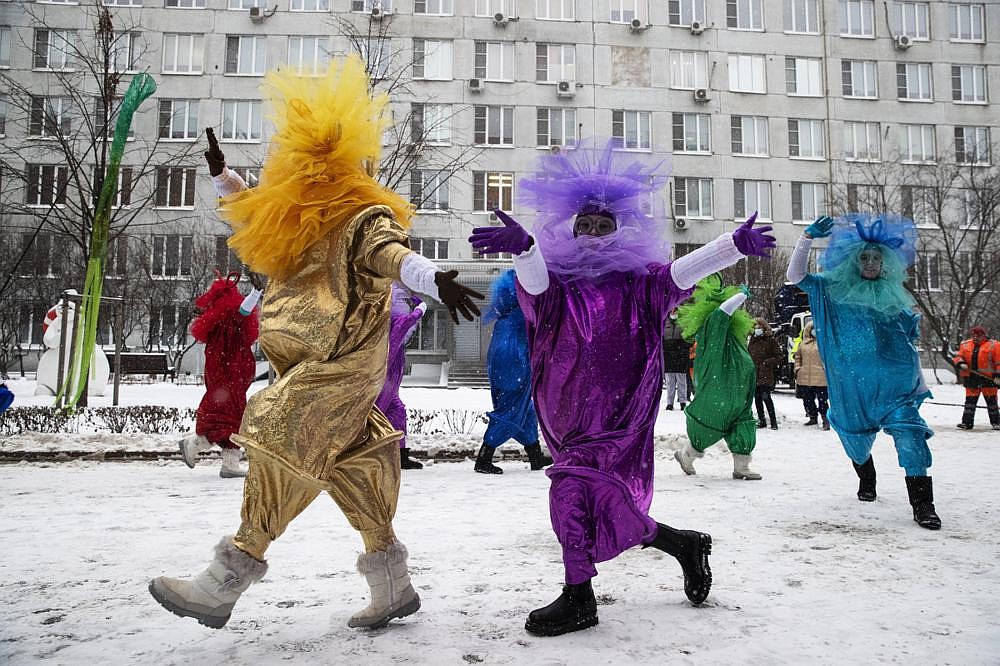 Artists dressed in Christmas costumes perform in the yard of a children’s hospital and greet children to mark the coming new year in Moscow.
(AP/Pavel Golovkin) 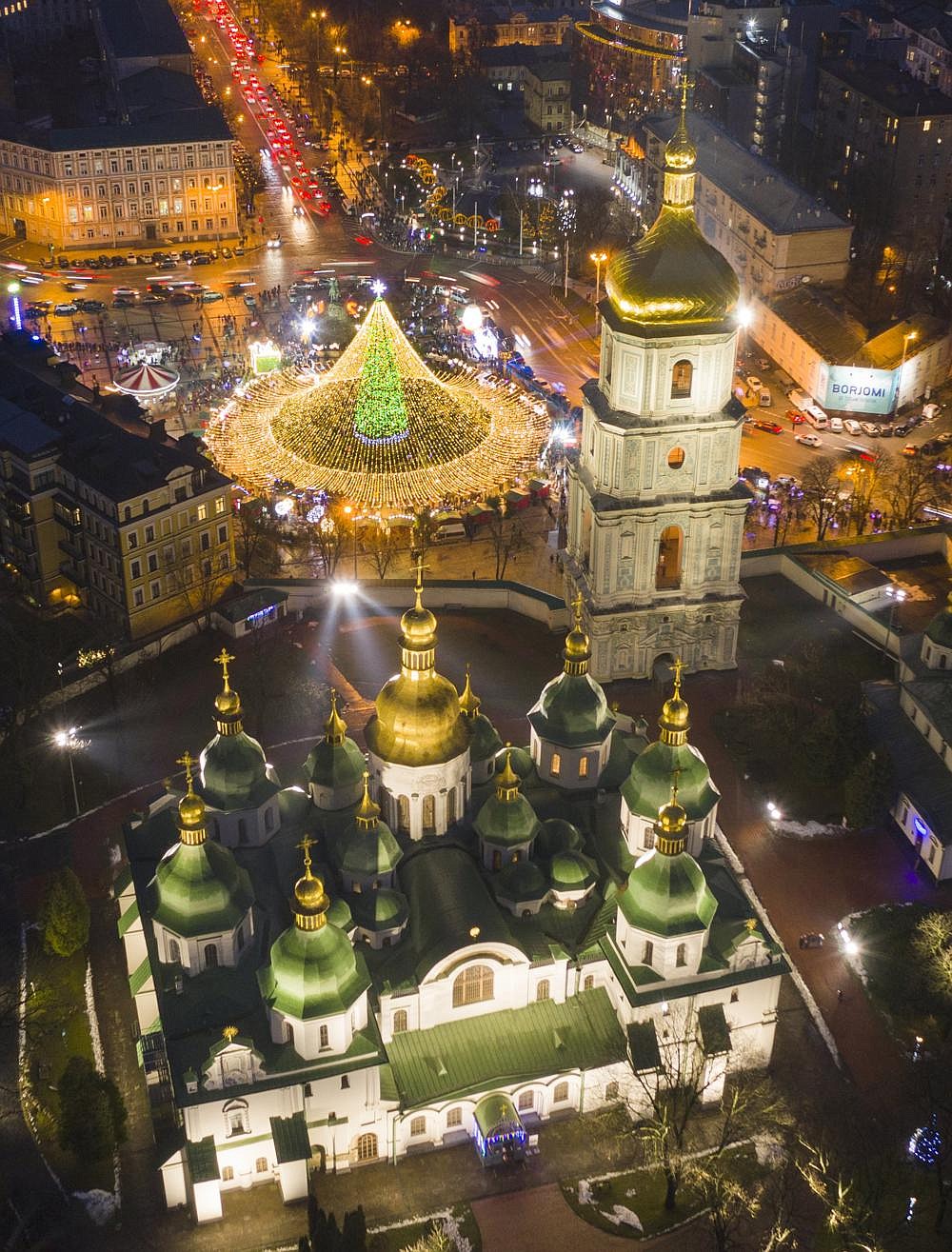 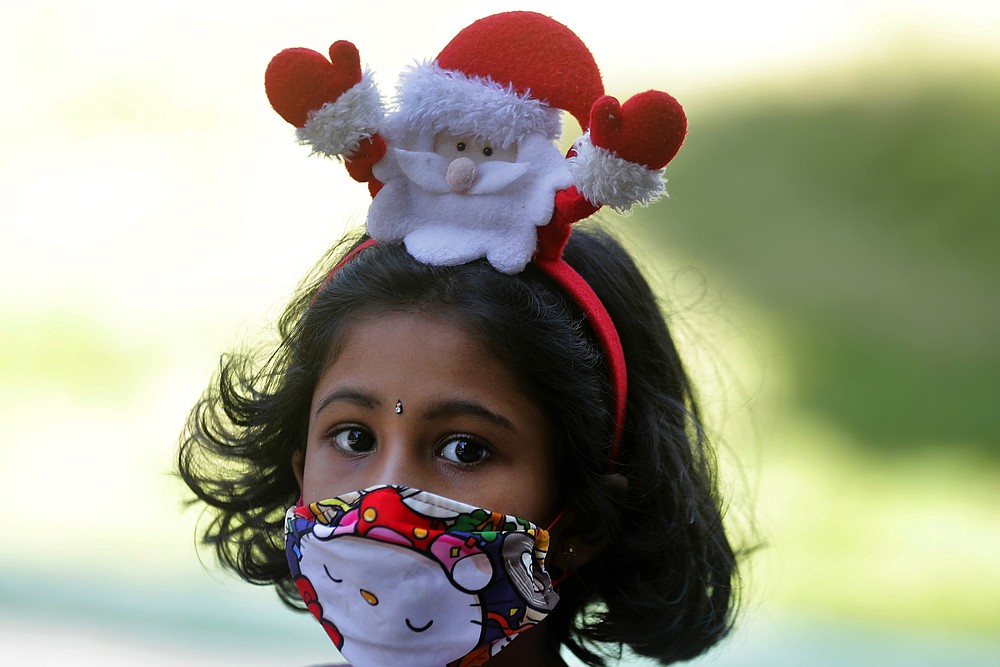 A Sri Lankan Christian girl wears a Santa hair band and a face mask as a precaution against the coronavirus as she arrives at a church to attend the Christmas mass in Colombo, Sri Lanka, Friday, Dec. 25, 2020. (AP Photo/Eranga Jayawardena) 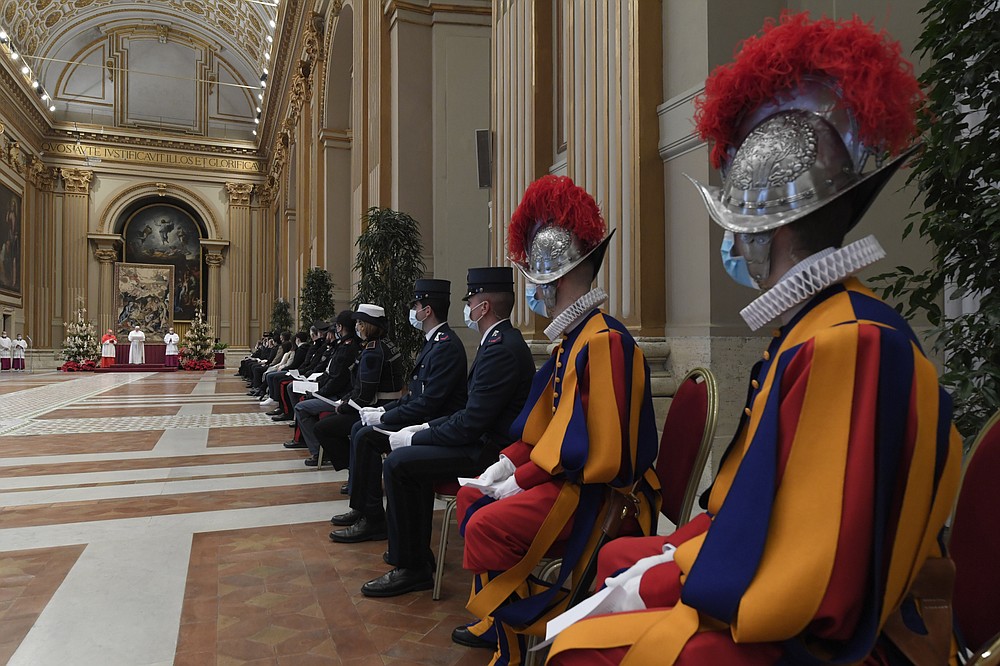 Pope Francis, background second from left, delivers the Urbi et Orbi (Latin for ‘to the city and to the world’ ) Christmas’ day blessing inside the blessing hall of St. Peter’s Basilica, at the Vatican, Friday, Dec. 25, 2020. (Vatican Media via AP) 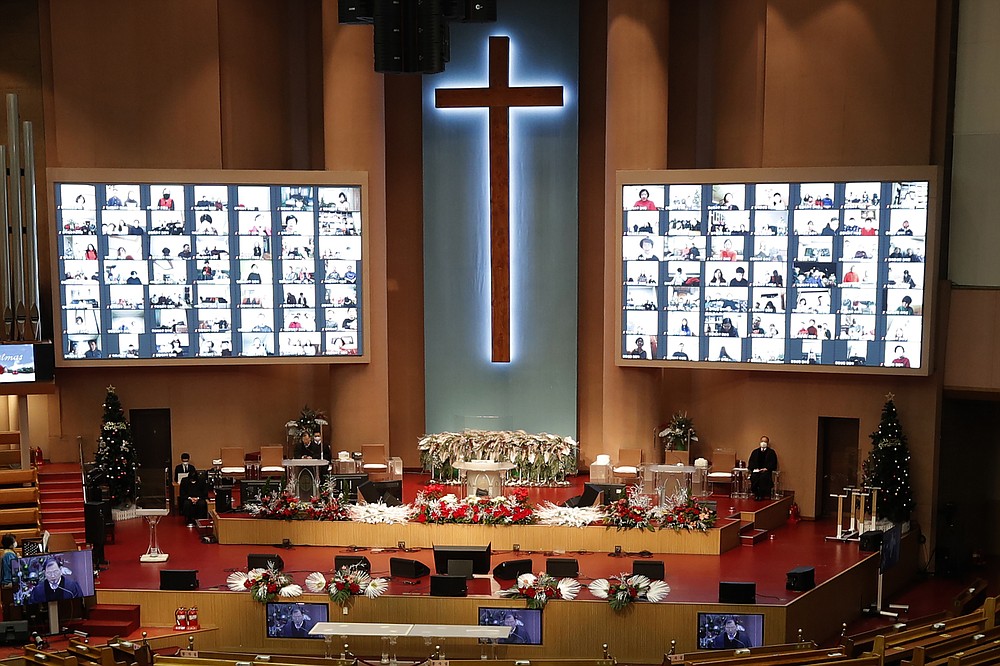 Christians on the screen attend an online Christmas service for social distancing and a precaution against the coronavirus at the Yoido Full Gospel Church in Seoul, South Korea, Friday, Dec. 25, 2020. (AP Photo/Lee Jin-man) 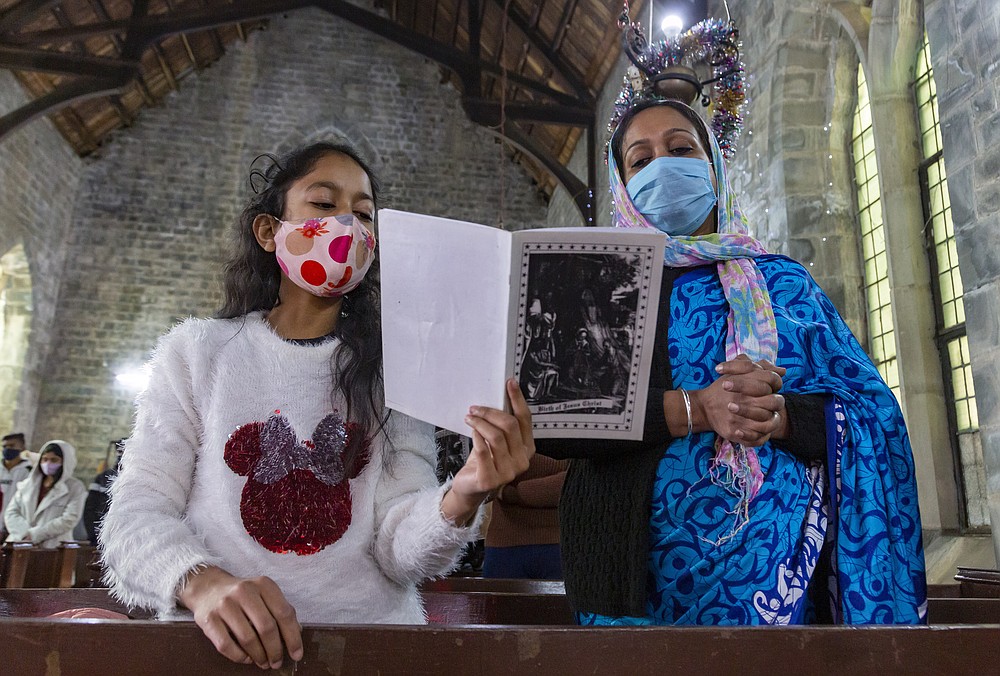 Indian Christians, who are registered members of St. John in the Wilderness church, attend the Christmas mass in Dharmsala, India, Friday, Dec. 25, 2020. The church which was built in 1852, is currently closed to general visitors due to COVID-19 restrictions. (AP Photo/Ashwini Bhatia) 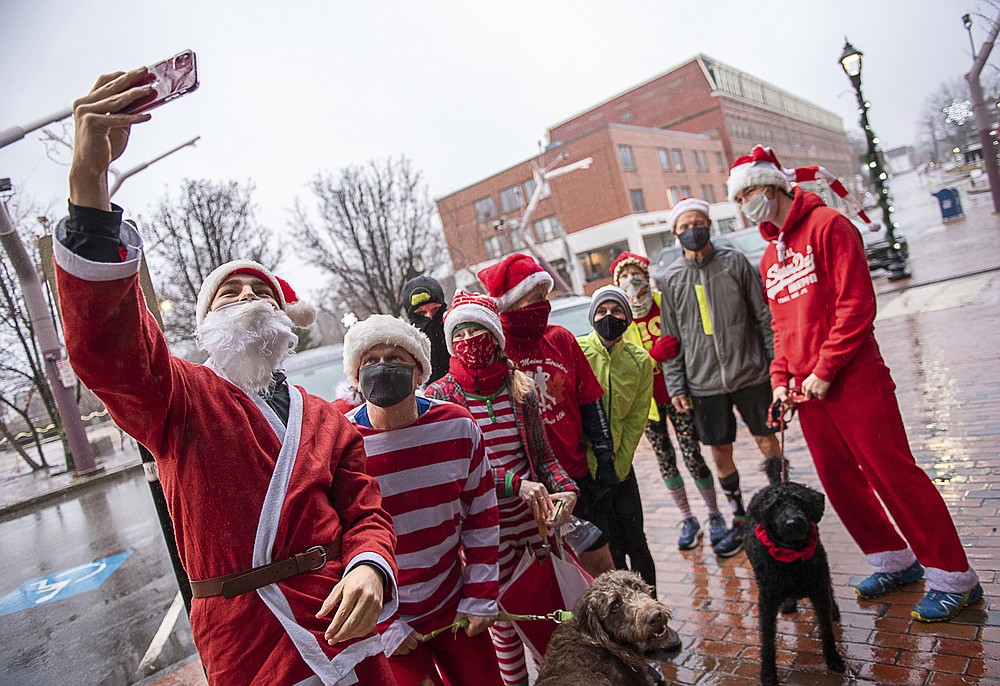 Maxi Kolb, an exchange student from Germany, takes a photo of a group of Santas and elves getting ready for their annual Christmas morning run on Main Street in Auburn, Maine on Friday, Dec. 25, 2020. The group gets together every Christmas morning and runs a loop through Lewiston Auburn. (Andree Kehn/Sun Journal via AP) 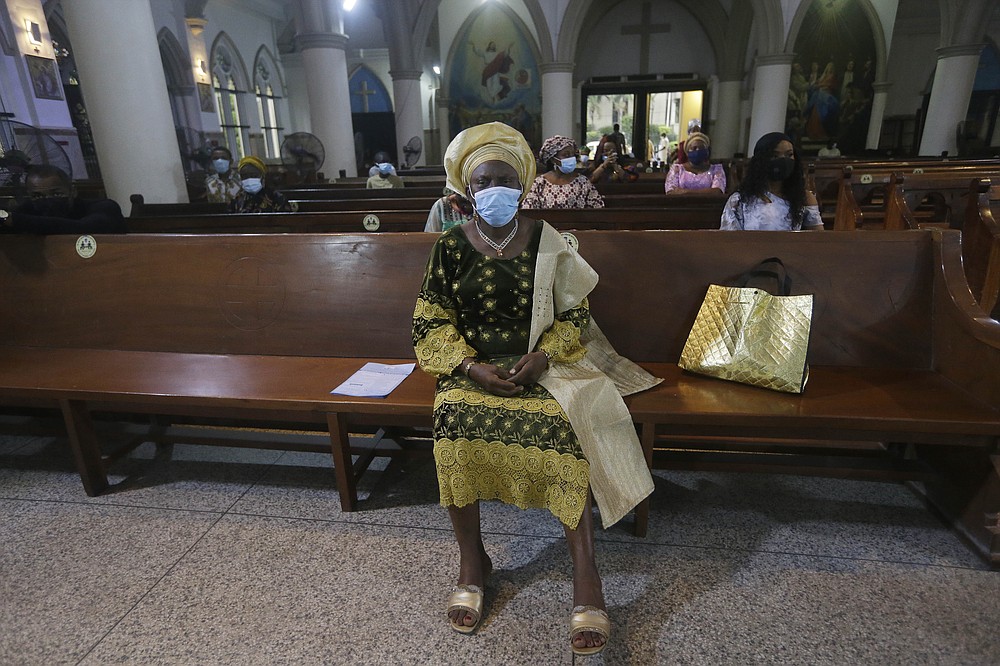 Parishioners wearing face mask to protect against coronavirus, attend a morning Christmas Mass at Holy Cross Cathedral in Lagos, Nigeria, Friday Dec. 25, 2020. Africa’s top public health official says another new variant of the coronavirus appears to have emerged in Nigeria, but further investigation is needed. The discovery could add to new alarm in the pandemic after similar variants were announced in recent days in Britain and South Africa and sparked the swift return of travel restrictions. (AP Photo/Sunday Alamba) 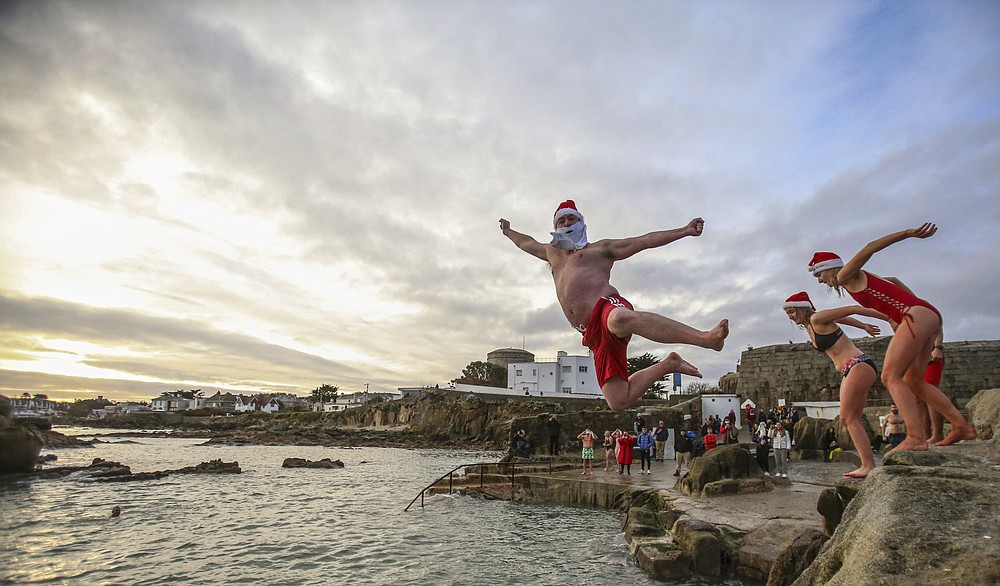 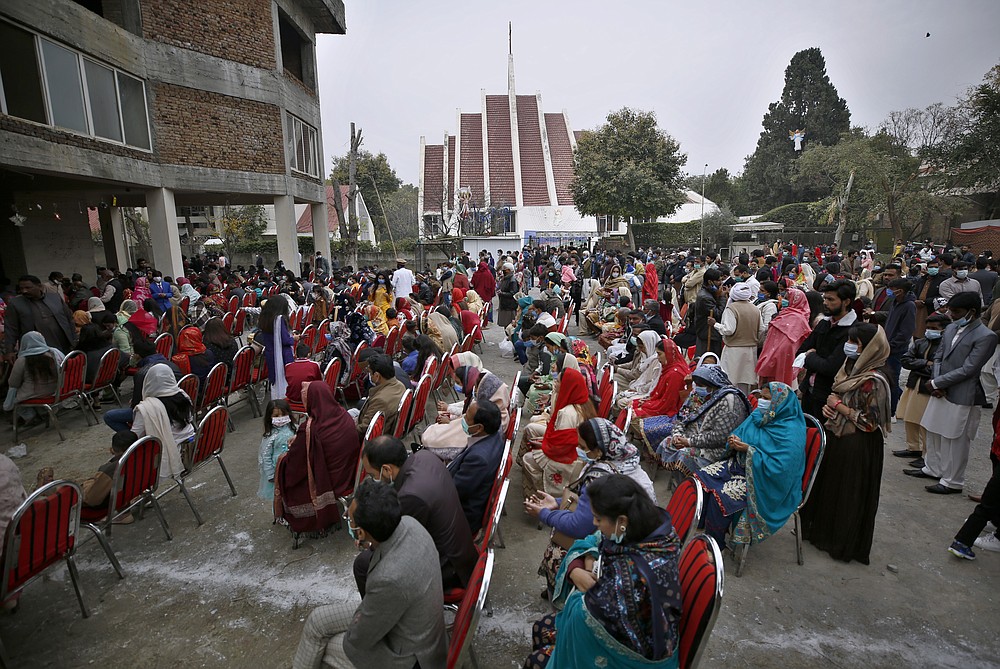 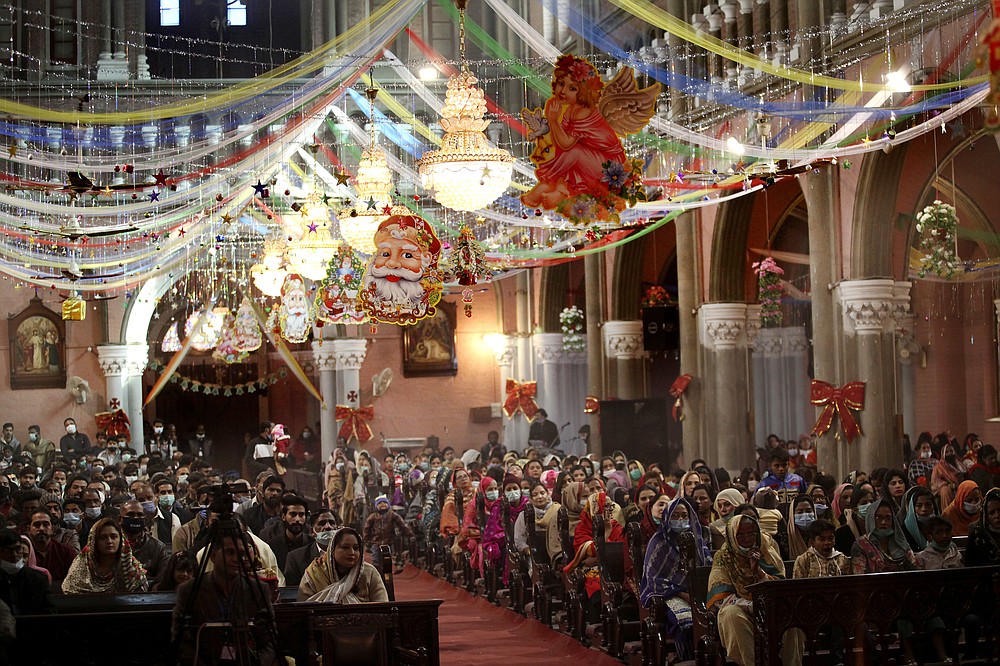