President-elect Joseph R. Biden Jr. has selected Miguel A. Cardona, Connecticut’s commissioner of education and a longtime public-school educator, as his nominee for secretary of education.

Like many education secretaries before him, Cardona has a background predominantly in elementary and secondary education. According to his online biography, he began his career as an elementary-school teacher before ascending to school principal, assistant superintendent, and statewide commissioner, a post he has held since last year.

The choice of Cardona, if confirmed by the U.S. Senate, makes good on Biden’s campaign promise to nominate a public-school educator as education secretary — meant to draw a sharp contrast with President Trump’s choice of Betsy DeVos, a billionaire with little experience in education, to lead the Education Department. And it jibes with Biden’s rhetoric in support of reopening schools in the first 100 days of his administration, even as the Covid-19 pandemic continues to rage. Cardona has pushed for Connecticut schools to operate in person.

Like Biden himself, Cardona got his undergraduate degree at a state college.

The pick, announced on Tuesday night, also underlines Biden’s pattern of choosing top personnel from among candidates with underrepresented backgrounds, including the institution type of their alma maters. Like Biden himself, Cardona got his undergraduate degree at a state college, Central Connecticut State University. Cardona’s pedigree — like that of Vice President-elect Kamala D. Harris, a graduate of Howard University, and the next first lady, Jill Biden, a community-college educator — may signal a focus on the types of institutions that often get lost in public discussion of colleges and universities.

Though he has focused on the public-school system throughout his career, Cardona last year offered some insight into what higher education means to him when he gave the commencement address at his alma mater.

Cardona told the graduating seniors that he had once been a freshman who was on the verge of failing every one of his classes. He was the first in his family to attend college, and didn’t have a lot of confidence in himself when he enrolled. “I wondered if this college thing was going to work out for me,” he said.

But in that moment, while sitting in a psychology class looking at his progress report, he had an epiphany, Cardona said. He thought about his parents and what they had sacrificed so that he could go to college. He chose to commit himself to his education, he said, and finished the semester with B’s. “I literally grew up at Central,” he told the students. Referring to his two children, he added: “My life trajectory changed, and so did theirs because of Central.”

‘Thinking About the Students’

That experience may have spurred Cardona to focus on student welfare. Gladis Kersaint, dean of the University of Connecticut’s Neag School of Education, said that “no matter what he’s doing, he’s thinking about the students.”

Cardona went on to earn two certificates and then a doctorate from UConn, where Casey Cobb, an educational-policy professor, served on his dissertation committee. Cobb said Cardona believes in higher education because he’s a product of it.

“He kept coming back,” Cobb said. “You don’t need a doctorate to be a superintendent in Connecticut.”

Richard Gonzales, director of programs in educational-leadership preparation at the Neag School, met Cardona after he had already earned his doctoral degree. Cardona returned to hear the dissertation defenses of other members of his cohort. Gonzales saw then what he would come to recognize as Cardona’s “willingness to show up and celebrate others.” A couple of years later, Gonzales recruited Cardona to teach as an adjunct at the Neag School, which he did for four years.

“He was always available,” Gonzales said. “He’s one of the instructors that, when you have his phone number, he’s going to answer you or call you back.”

Zulma R. Toro, president of Central Connecticut State, said Cardona was part of a program at the university to help first-generation college students transition from high school, and he has maintained ties to his alma mater.

As Connecticut’s commissioner of education, Cardona helped establish a program at the university that brings college students into elementary and secondary classrooms to give them experience and mentorship for future careers in education.

“The fact that Miguel represents the changing demographic in higher education, that sends an outstanding message to students that it can be done,” Toro said. “If you work hard, the American dream is achievable.”

Cardona has also voiced support for more noncollege pathways for students. “One of the things I want to guard against is tracking or saying to an eighth grader, ‘You’re college-bound, you’re not that’ — that to me perpetuates inequities,” The Connecticut Mirror quoted him as saying. “We have a lot of students sitting in our high schools today who need hands-on experiences, who want to build things, who want to develop things, who want to manufacture, who want to go into IT, go into business. And oftentimes, we have students who don’t take those opportunities, because they’re going to be less likely to be looked at by colleges.”

The implications for higher education of Cardona’s nomination are not immediately clear. His lack of an agenda or longtime experience in the academy will do nothing to ease the anticipation about the biggest question facing Biden on higher education in the short term: whether he will take action to unilaterally forgive tens of thousands of dollars in student-loan debt for millions of borrowers, as some progressive Democrats have urged.

Wesley Whistle, senior adviser for policy and strategy at New America, said he would be glad to see someone at the Education Department who understands the “types of colleges that most people attend.”

But Cardona’s background in elementary and secondary education means there is also a lot of uncertainty about his views on undoing the changes in Title IX enforcement put in place by DeVos and her rollback of accountability for for-profit colleges.

Ted Mitchell, president of the American Council on Education, said Cardona is an “important advocate for public education, a marked contrast to the team that is in place now, and a welcome contrast.”

“These are jobs about big policies,” Mitchell said, “but the best policies are rooted in real experience, and he has that in spades.”

Although Cardona lacks extensive experience in higher-education policy, Mitchell said, he can be a strong voice in efforts to build cooperation between the federal government and the states. “State support is essential, and I think that’s going to be a crucial issue,” he said.

Cardona serves on UConn’s Board of Trustees. The university’s president, Thomas Katsouleas, said Cardona is motivated by “the need to ensure we create opportunity for a diverse population to succeed in college.”

“I’ve heard him speak to sixth graders and legislators,” Katsouleas said, “and he’s equally comfortable bringing that same message to all of them.”

Wed Dec 23 , 2020
COLORADO SPRINGS, Colo. (KKTV) – Parents of District 11 students will have a new option of where to enroll their child for the 21-22 school year. The district has announced a new school solely for e-learning. D-11 leaders say the pandemic has shown some families prefer remote learning. The new […] 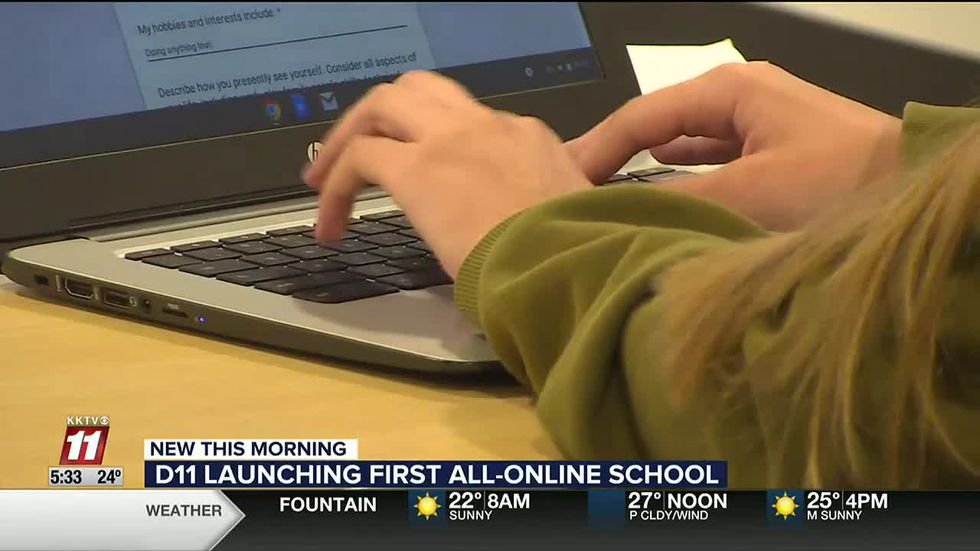