“Warp speed” may be a term of the moment, thanks to the federal coronavirus vaccine program. But it’s also one with a history — which goes back farther than “Star Trek,” to a forgotten 1952 science fiction story in the pulp magazine Imagination.

Ditto for “transporter,” “moon base” and “deep space,” to name just a few of the more than 400 words whose origins are getting pushed back earlier than their previously first appearance, thanks to the Historical Dictionary of Science Fiction, a new free online resource released on Tuesday.

A historical dictionary devoted to the history of something as future-oriented (and imaginary) as science fiction may seem like a contradiction in terms. But then science fiction has always had a curious relationship to the real world, said Jesse Sheidlower, its editor.

The dictionary is the latest in a series of eclectic projects for Sheidlower, a former editor at large at the Oxford English Dictionary who first came to prominence in the 1990s, as part of a new generation of lexicographers injecting the field with a fresh nerd-cool factor.

In 1995, he published “The F-Word,” a cheekily learned history of the notorious obscenity. More recently, Sheidlower, now an independent lexicographer, worked as a language consultant on Amazon’s adaptation of Philip K. Dick’s “The Man in the High Castle.”

Peter Gilliver, an executive editor at the O.E.D. and the author of “The Making of the Oxford English Dictionary,” called the new online dictionary “quite impressive, and very stylishly presented.”

“Jesse doesn’t like to leave any stone unturned,” he said. “He’s a very dogged researcher.”

Historical dictionaries aim to show not just what words mean, but who has used them, in what contexts, and how those meanings have evolved. They range from behemoths like the O.E.D. itself, which attempts to cover the whole of the language, to national dictionaries like the “Dictionary of Canadianisms on Historical Principles” to more specialized efforts dedicated to golfing terms or hip-hop.

The science fiction dictionary grew out of the Science Fiction Citations Project, a crowdsourced effort initiated in 2001 by the O.E.D. and managed by Sheidlower. The goal of that project was to expand the O.E.D.’s coverage of science fiction, something of a gap in its research, by drawing on the reading and knowledge of fans. (“Brave New Words,” a print historical dictionary based on the project and edited by Jeff Prucher, appeared in 2007.)

In early 2020, Sheidlower, who left the O.E.D. in 2013, got permission to continue the project independently. (In addition to the editing, he coded the site himself, and shares his research back with the O.E.D.) He turned out to have more free time than he expected, thanks to the pandemic. He also had a resource that didn’t yet exist when the original project started: the Internet Archive’s vast collection of digitized — and searchable — pulp magazines.

As for his own science fiction consumption, Sheidlower described himself as more of a “regular reader” than a superfan. “It’s probably good to keep a little distance, just to maintain perspective,” he said.

The Historical Dictionary of Science Fiction includes some 1,800 separate entries, from “actifan” and “aerocar” to “zero-gravity” and “zine.” Headwords and other display type are rendered in Sagittarius, a new typeface by the designer Jonathan Hoefler, whose original typefaces have appeared on “Star Trek: Picard” (and in The New York Times).

Users can look up individual words, or browse through subject categories like fandom, weaponry, demonyns (names for beings for particular locations), FTL (shorthand for faster-than-light travel) and, yes, “Star Trek.”

The most cited authors are Robert Heinlein, Poul Anderson and Isaac Asimov. But if an author is not represented, Sheidlower emphasized, that’s not a value judgment.

“The harder your science fiction, the more likely you are to be using terms other people are using,” he said. But writers of “soft science fiction” (defined in the dictionary as science fiction based on soft sciences like anthropology or sociology, or in which science plays a relatively small role), he said, may actually be more innovative in their language.

He mentioned N.K. Jemisin, whose Broken Earth trilogy, published between 2015 and 2017, won three consecutive Hugo Awards. “She’s not, for the most part, using words everyone is using.” he said. “The fact that she’s not in here doesn’t mean she’s unimportant. It can actually mean the opposite.”

One of the main goals of historical lexicography is finding antedatings, as instances that push back the earliest known use of a term are called. Some included here involve large leaps: “Thought-controlled,” used to describe devices controlled by neural impulses, is pushed back to 1934 from 1977.

The dictionary also illustrates the complicated interplay between imaginative literature and the real world. The words “graviton” and “biotechnician,” for example, first appeared in science fiction sources before being adopted in the real world.

Conversely, Sheidlower said he was surprised to learn that “hypospray,” another term chiefly associated with “Star Trek” (defined as “an injection device which forces a fine, high-pressure jet of fluid through the skin without breaking it”), not only appeared as early as the 1940s, but was in fact a real device that was trademarked in 1948.

Antedatings may be the sexy, attention-grabbing aspect of lexicography. But the guts of dictionary-making is the writing of definitions, which for science fiction terms carries particular challenges.

“When you’re talking about nonexistent things, the precise way they operate is often hand-waved away” by the writer, he said.

And then there’s the challenge of defining “science fiction” itself, as well as related genre terms like “science fantasy” and “speculative fiction.”

The dictionary defines the term science fiction (which it dates to 1911) as referring to “a genre (of fiction, film, etc.) in which the plot or setting features speculative scientific or technological advances or differences.”

The day before the dictionary went live, Sheidlower was still fiddling with that definition. But he said it was hard to improve on the one offered by the author and critic Damon Knight in 1952: “‘Science fiction is what we point at when we say, ‘This is science fiction.’”

“In some ways, that’s the ultimate pass-the-buck thing,” Sheidlower said. “But at the same time, it’s the most accurate definition you could possibly come up with.”

Tue Jan 26 , 2021
For two decades, Florida has been viewed across the nation as the state most willing to push the envelope on what once was referred to as school “reform” — test-based accountability and choice high on the list of initiatives aimed at improving student outcomes. This year, some Republican lawmakers appear […] 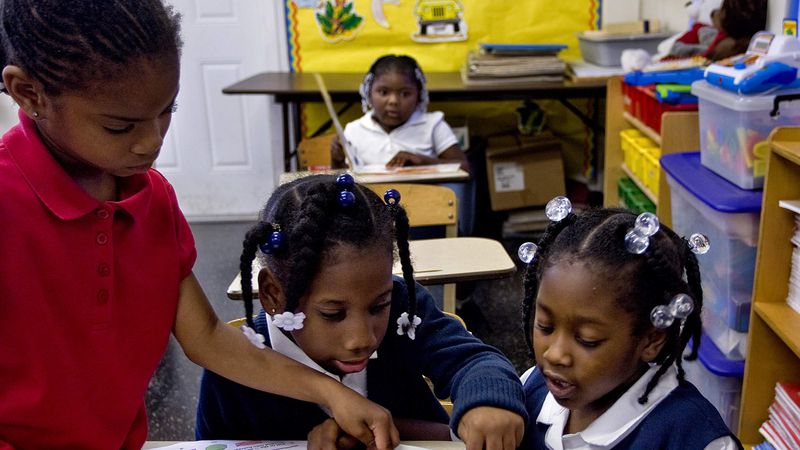