As anyone who has experienced middle age will know, the process of growing old can be extremely hard on the body. Your bones begin to leak calcium, your muscles begin to shrivel, the immune system weakens, and arthritis can set in. Poor posture and balance affect how you move about the world, while cataracts and deteriorating eyesight impair how you see it. Heart problems and declining cognitive function eventually set in as people approach the end of their lives.

These symptoms, however, can also be caused by something less common: space travel.

Spaceflight influences biology in dramatic ways, and people in space appear to experience the effects of aging faster than people on Earth. Now, scientists have gained a better understanding of space travel’s influence on living beings than ever before. A slew of 29 papers recently published in the journals Cell, Cell Reports, iScience, Cell Systems, and Patterns examine the biological hazards of spaceflight in 56 astronauts—more than 10 percent of all the people who have ever been to space.

The new studies bring us a step closer to identifying the mechanisms underpinning the biological responses to living in space. More than 200 scientists demonstrated that space upends the genes, mitochondrial function, and chemical balances in the cells to trigger a cascade of broader health effects in spacefaring humans and animals.

“The entire body is affected, because [space] is such a different and extreme environment,” says Susan Bailey, a radiologist at Colorado State University who participated in multiple of the new studies.

The health effects associated with spaceflight have several similarities to aging-related disorders, such as cancer and osteoporosis. While spaceflight’s parallels to aging are a concern for long-term crewed missions—such as those that would be required on a voyage to Mars—the unique space environment also presents a unique opportunity to study the physiology of aging.

It’s estimated that the heart, blood vessels, bones, and muscles deteriorate more than 10 times faster in space than by natural aging. This means to study the aging process, scientists don’t have to wait for their biological subjects to naturally mature on Earth—they can harness the accelerated health effects by running experiments on the International Space Station (ISS).

Scientists stress that the symptoms of space travel aren’t exactly the same as aging, and many changes reverse themselves once people return to Earth, but the comparisons are still useful. Spaceflight is an immersive experience that spares no traveler, while aging happens to every Earthling whether we like it or not. As such, life in space is a good model for understanding aging as a chronic process, Bailey says. The barren otherworld of outer space could even reveal new ways to protect ourselves against the process of growing old.

A dose of space

All life on our planet has evolved under Earth’s gravity and conditions, so we aren’t optimized for living in any other kind of environment. Space affects different cells in different ways, says Michael Roberts, interim chief scientist of the ISS National Laboratory. “It’s not a single acute exposure to toxic agents, for example; it’s something that’s long-term, chronic, and persistent.” Living in space resets the body’s equilibrium levels for functioning optimally, he adds, thereby rebooting the physiological norms of how cells respond.

In microgravity, the heart, bones, and muscles don’t need to toil as hard as they do back on Earth, so they languish from disuse. Liquids flow differently in space, and this may change the shapes of fluid-filled tissues, such as those in the brain. The higher background radiation beyond Earth’s atmosphere may also damage DNA and increase the risk of cancer. Even the slightly higher carbon dioxide levels on the ISS can throw off an astronaut’s physiology.

The new research on the health effects of spaceflight echoes the findings of a previous comprehensive health profiling of NASA twin astronauts Scott and Mark Kelly. The NASA Twins Study involved 10 research teams monitoring the molecular and physiological changes that Scott experienced during and after a year-long sojourn in space. The researchers compared the changes to Scott’s identical twin Mark, who stayed earthbound during this time.

From over 300 biological samples, the teams catalogued a series of bodily differences in the twin astronauts, including changes to the astronauts’ gene expressions, microbiomes, cognitive functions, and vascular systems.

In the Twins Study, Bailey made a striking discovery: Scott’s telomeres changed in length. Telomeres plug the end of chromosomes to protect them from damage, much like the plastic caps that prevent shoelaces from fraying. They are a good indicator for aging, Bailey says, because their lengths are affected by all aspects of earthly living, from our diet to our lifestyle and even our mental well-being. Telomeres shorten as we age, and how quickly our telomeres shorten is an important marker of health.

During Scott’s time in space, scientists observed an unexpected overall lengthening of his telomeres. When he returned to Earth, however, his telomeres rapidly shrunk. “Even though they were longer during spaceflight, he still ended up with shorter telomeres than he started with,” Bailey says.

“Altered telomere length has been associated with things like cardiovascular disease, particularly short telomeres,” she adds. However, Scott’s elongated telomeres during his time in space isn’t a good sign either. “Longer telomeres are also associated with cancer. You really can’t win the game.”

As revealing as the Twins Study was, it only had a sample size of one: Scott Kelly, measured against a control participant in his twin Mark. Now researchers are confirming the study’s findings—including telomere changes—by examining dozens of astronauts who have spent months in space. Like in the Twins Study, the researchers recorded a suite of physiological changes and attempted to identify the mechanisms, such as specific proteins or genes, that caused them.

Some of the symptoms of spaceflight seem to stabilize after a certain amount of time in orbit, such as decreased blood volume and changes in the heart and lungs. But astronauts haven’t lived on the ISS long enough for scientists to say for sure that these changes to the body will ultimately reach a steady state.

“We’ve now got some foundational studies,” Bailey notes, “but it’s still a little too early to say.”

Of mice and muscle

Space is also a fitting environment for scientists to test drug candidates associated with aging. In a recent study, one research team at U.S.-based pharmaceutical company Eli Lilly tested whether an antibody drug could prevent muscle loss in mice on the ISS. (The company also makes an antibody treatment that recently received emergency approval from the FDA to treat COVID-19.) The group leveraged space’s biologically stressful environment to induce muscle atrophy resembling aging and cancer.

“In space, the whole body of the animal is under the effects of microgravity,” says retired Eli Lilly cellular biologist Rosamund Smith who led the research. An analogous aging experiment on Earth would involve raising mice in a weightless environment by suspending their hind limbs with slings, or simply waiting for the mice to grow old. But artificial aging methods on Earth don’t provide a full-body experience to age all the body’s muscles at once, Smith says.

The Eli Lilly researchers confirmed that space indeed shrinks and weakens the muscles of the mice living on the ISS, matching previous observations in astronauts. Injecting the antibody drug into the mice preserved the mice’s muscles. Such drugs could counter microgravity’s pernicious effects on astronauts during longer crewed missions and be used as therapeutics back on Earth.

“It’s amazing how widespread the effects of microgravity are on the human system,” Smith says. “There’s a benefit to understanding and using space to help us learn about human physiology and therefore human disease.”

Scientists are also shifting to a new research platform that models human physiology better than animals: tissue chips. These USB stick-sized gadgets contain chambers and channels of cells bathed in liquid sustenance. Tissue chips typically host a concoction of cells representative of a particular human organ. Fluid flow in the chips is able to reproduce the body’s inner shear and stretch forces, and a chip’s interior walls provide anchor sites for cells to arrange and grow on. Essentially, tissue chips behave like a microcosm of the internal human body.

Sonja Schrepfer, an immunologist at the University of California, San Francisco, led a collaborative effort to launch the first tissue chip experiment to the ISS in 2018 under the Tissue Chips in Space initiative by the National Center for Advancing Translational Sciences. Schrepfer’s research aims to shed light on aging in the immune system and whether a waning immunity can be rejuvenated.

If space sets off premature aging, then perhaps bringing cells back from space turns off or reverses the deterioration, Schrepfer says. “If you understand why it’s reversible and you find that mechanism, you can switch that on in patients.”

Scott Kelly experienced a reversal in telomere lengthening after returning to Earth, and other effects of spaceflight, such as altered gene expressions and bone loss, also disappear after astronauts return home.

If similar changes are observed in her tissue chips, Schrepfer’s team intends to hunt for a molecular trigger. Identifying the proteins and genes involved could aid researchers in developing reverse-aging treatments for senior citizens and patients with abnormally sluggish immune systems. The researchers are on the chase as they prepare for a second round of ISS experiments, launching in March 2021.

Many of these therapies have been inspired by efforts to boost humans’ adaptability to space, which could in turn address many of the aging-related diseases that plague the terrestrial masses of humanity. Ultimately, the studies of space adaptations and anti-aging treatments cross-fertilize each other.

In the meantime, there’s no shortage of astronauts willing to brave the occupational hazard of space exposure. Humankind’s fascination with space will never grow old, and the astronauts on the ISS probably find joy in their work despite the health risks, Bailey says.

“Most of [the astronauts] look like they’re just having a grand old time floating around,” she says. “Even though it’s, of course, a lot of work, it’s a passion and a joy for them. And I can’t help but think that that might help maintain their telomere length, too.”

Back to the 1960s? Education May Be Latin America’s Most Lasting Scar from COVID-19 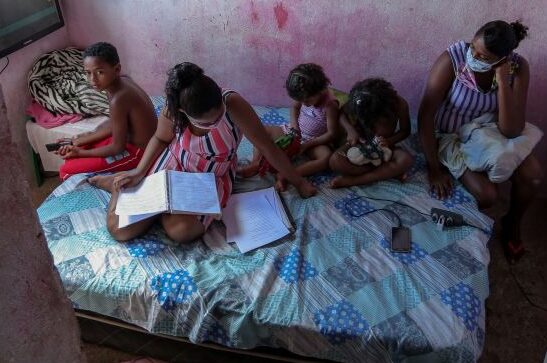