When it came to Indian Americans like her, Gupta says, there was “really nothing.”

That lack of representation had a profound impact on Gupta, who said she started rejecting parts of her culture and her identity: “It’s really heartbreaking.”

Since the nationwide Black Lives Matter protests in 2020, Gupta and other student leaders have been pushing the Central York School District to adopt more-inclusive curriculums, particularly in subjects such as social studies and history.

In November 2020, the school district went the other direction — banning a list of anti-racist books and educational resources by and about people of color. Gupta, along with other members of the student-run Panther Anti-Racist Union, organized protests — drawing nationwide attention to their school, as similar conflicts mushroomed across the country. While some educators, students and their parents have called for more diversity in their studies, some school boards and local government officials, citing complaints from other parents, have responded with book bans and policies restricting how race, gender and sexuality are taught.

In September, after months of community protests, Central York’s school board voted unanimously to reinstate the resource list.

Then-school board president Jane Johnson said at the time: “What we are attempting to do is balance legitimate academic freedom with what could be literature/materials that are too activist in nature, and may lean more toward indoctrination rather than age-appropriate academic content.”

While the reversal was hailed as a success, Ben Hodge, a Central York High School teacher and staff adviser for PARU, tells The Post that educators are “in limbo” with their curriculum, which hasn’t been updated since 2018.

Since the book ban, educators told the York Dispatch that they fear what may happen if they talk about “feminism” or “social justice” in their classrooms. And as the publication reported this month, many of them, along with their students, are waiting to see whether a new curriculum will address their concerns. The school board is still reviewing curriculum updates in social studies, English language arts, library studies and guidance, which were brought forward in 2020. (The school board did not respond to The Post’s questions about their current status.)

The Post asked PARU student leaders, including Gupta, sisters Christina and Renee Ellis, and Olivia Pituch, about the kind of learning they want to experience in their classrooms. Here’s what they had to say.

Responses have been edited for length and clarity.

When the book ban happened, it kind of kick-started my fight-or-flight response in a way. I chose to kind of fight, if that makes sense. And so that is how I got involved.

The docuseries on Netflix called “Amend” goes through a lot of minority groups. I think [an approach like] that would be a great way to showcase a lot of what American history is. I watched the docuseries and saw things that I didn’t even know about as an African American.

We need to spend more time on who really built this country and how this country did a lot of minority groups so wrong in the past and are still doing them so wrong.

People will say that [more-inclusive curriculums] will make White people feel uncomfortable. Well, it’s also uncomfortable for African American students to hear in classes that their ancestors were being lynched and have all the White kids turn around, look at you and stare at you while the teacher is talking to you about that. That’s uncomfortable.

I was never happy when that sliver of the class [curriculum] brought up Asian American history or hate. There is just simply so much more to that in this country than just the discrimination that they faced initially when they came. It was so many acts and so many things that people need to know to really understand how it feels to be a person of color. I think that’s what’s lacking.

There’s this fakeness that’s been put over everything. There’s this sheet of like, “Let’s just cover it and we’re past that. We’re done with that. There aren’t any long-lasting effects of racism and discrimination in this country.” But there are, and it is so hard to get anybody to be real, to talk about that and to be uncomfortable about that.

Things in America right now are so politically divided, but we are neutral. We do not have any political agenda. Unfortunately, people use their politics to attack schools, to attack the government. It’s really unfortunate.

I would like us to learn about political science — I think that’s super-important. How the government works and basic structures is good to know as well, but we need to know how those systems function, so that we know what “systemic racism” means and we know how to address that. Also, people do not know the importance of local elections. I think we should learn that as well.

I think we should push for a broader American studies program. I also think learning basic human decency — as naive as that sounds — is lacking. Why can’t we learn how to discuss and have good political conversations with one another and be civil about things? We want to learn about what civics is, what our civic duty is, but we don’t learn how to be civil.

Hatred, divisiveness, anger has boldly affected our education in the past. It’s important to stop it where we can, because ignorance is one thing. Hatred helps fuel ignorance. It’s a continuing cycle that definitely affects our education and affects us having these civil and honest discussions.

I’m really tired of learning, you know, only the basics — only learning about White men in history, if we’re being completely honest. There is so much more to America’s history.

Something that is more near and dear to my heart, since I am an LGBTQ member: I didn’t learn about big events like Stonewall. I had to actively try to educate myself because my educational system wasn’t providing me with this information.

I want to be in a classroom where I’m actually learning about all these incredible people rather than hearing it in a debate class, while people argue over whether you should be able to marry the person you love.

Silence can be really hard to break. And it can be really kind of deafening. All those amazing activists in the past, they broke the silence for us. So I definitely am very grateful that we’ve had their inspiration. That has been amazing because we just had to take the torch and run with it.

Fri Feb 25 , 2022
Katie Peters, an English teacher at Whitmer High School, poses in her classroom on Feb. 7, 2022, in Toledo, Ohio. Teachers in several states, including Ohio, soon could be required to post all their course materials online for parental review under legislation being proposed by lawmakers. (AP Photo/John Seewer) COLUMBUS, […] 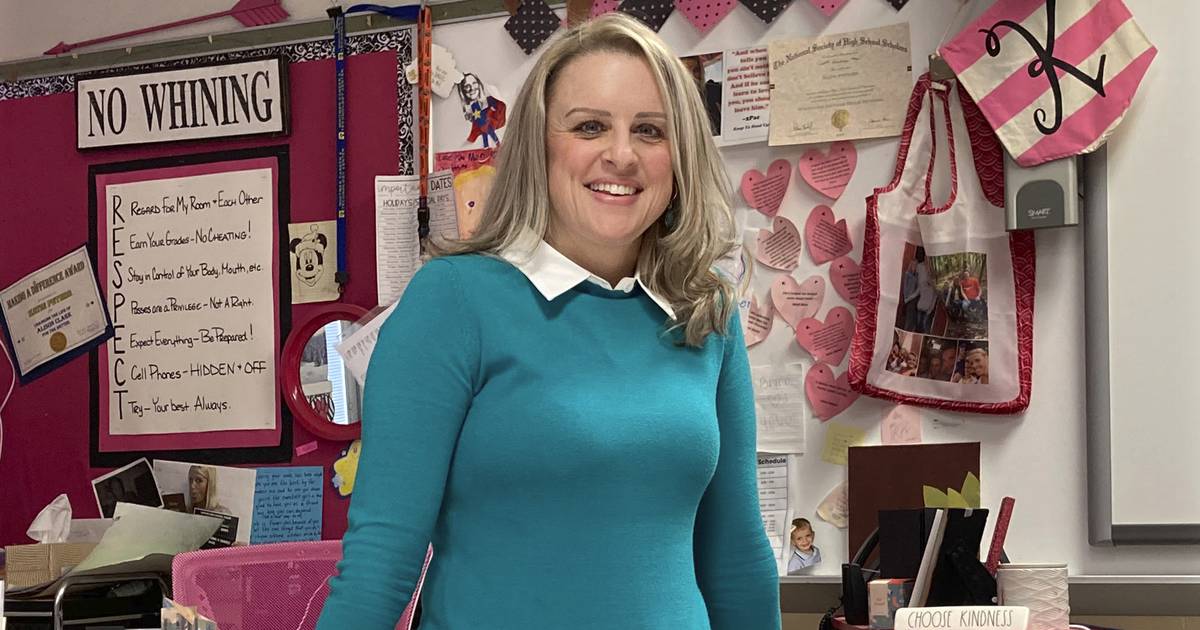