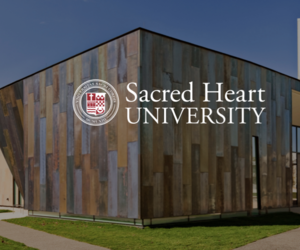 FAIRFIELD, Conn.—Two new students have been smiling since classes began at Sacred Heart University earlier this month. Even though exchange students Niamh Conlon and Emma Ryan have been on SHU’s campus for a short time, they already feel at home.

“Everybody has been so welcoming,” Ryan said as she stood outside SHU’S Chapel of the Holy Spirit.

Conlon echoed her peer’s sentiment, saying, “Everyone has been so helpful, so positive.”

The 20-year-old students, who are primary education majors, have the distinction of being the first exchange students at SHU. They spent the last two years studying at their home institution, Mary Immaculate College (MIC) in Limerick. Now they have embarked on their junior year immersed in courses at SHU’s Isabelle Farrington College of Education & Human Development (IFCEHD). As part of the exchange, Sacred Heart will send three students from the college to MIC in the spring for a semester.

Conlon said she knew she would go abroad during her college years because her bachelor’s degree is international. Ryan was not required to study abroad, but she wanted to pursue the opportunity because she enjoys traveling, learning and gaining global experiences.

At MIC, the two students developed a list of 10 study destinations and rated them by preference. Conlon’s first choice was SHU. Researching Sacred Heart, she learned about the education program and its many modules, and she knew it would be the ideal place for her to learn. “I just fell in love with the curriculum and what I could be studying. I thought this could be a great opportunity,” she said. Being able to visit cousins who live nearby helped solidify her choice. “I really wanted this to work out,” she said, adding that her parents supported her decision, with her mother encouraging her to “spread her wings.”

Conlon grew up in Clare, Ireland, and didn’t travel much, so she considered the chance to study in the United States a once-in-a-lifetime opportunity. “I can always go to Europe, but America … I knew it would be a different culture, and it would allow me to be more independent.”

Ryan, on the other hand, initially wanted to study in Spain, but after learning she was placed at SHU, she realized it was the best option for her. She started following the University on social media and saw many photographs and videos that introduced her to the campus. “I saw all that Sacred Heart had to offer, and I thought, ‘Wow, what a lovely place.’”

Ryan grew up traveling and realizes that education is inherent in visits to new places and encounters with new people. Her parents supported her plan to study in America and are proud of her desire to explore different cultures.

Acclimating to new people and experiences

While Ryan and Conlon seem like they have known each other for years, they only met for coffee once in Limerick before connecting at the airport for their flight to Connecticut. They hit it off and are getting along well. Roommates now at SHU, they are acclimating to residence hall life and the shuttle schedule. They enjoyed meeting their new professors and welcomed their full syllabus of challenging courses. They also look forward to learning about the many extracurricular activities Sacred Heart offers

Teaching was a natural career path for Ryan, who grew up playing sports with her two sisters. As she focused on her athleticism, she realized she had a knack for coaching and that working with children was something she thoroughly enjoyed.

Like Ryan, Conlon was drawn to a career in education. She fondly remembers playing school as a child and, as she grew, she gravitated toward activities that enabled her to help others. “There’s nothing better than helping a child, seeing them smile when they get something right,” Conlon said. “Also, as a teacher, you might be one of only a few reliable people in a young student’s life. Giving them stability is a tremendous gift.”

Working out the exchange

Michael Alfano, IFCEHD dean and vice provost of strategic partnerships, wanted to launch an exchange program at SHU when he joined the University in 2018. He learned about the University’s campus in Dingle, Ireland, and he was determined to make connections in that area with an institution that offered an education program.

During a 2019 trip to the Dingle campus, Alfano visited MIC. He said he had great conversations with staff there, and an exchange program seemed set to go. Then the pandemic hit. “We had all this great momentum, these really exciting conversations, and then everything just stopped,” Alfano said.

After many delays, the program has launched and Alfano is thrilled. He credits his IFCEHD faculty, the international admissions office, the office of global affairs, the provost’s office, immigration support services, student life and residential life for bringing the program to fruition and ensuring Ryan and Conlon arrived at SHU in time for the start of classes. Completing paperwork and acquiring visas was no easy feat, he said, adding, “What they were able to accomplish was really miraculous.”

Alfano persisted in his efforts to establish the exchange program and partnership with MIC because, he said, this is a vital part of higher education. “Our future teachers are gaining a global perspective. Cultural exchange is important, and it ties right into the SHU mission of preparing our students personally and professionally to make a difference in the global community,” he said. Moreover, Alfano sees MIC and SHU as a good match, noting similarities between the two. Both are “very dynamic places with excellent faculty and staff and outstanding leadership,” he observed.

He is gratified to have Ryan and Conlon at SHU, sitting beside other education majors, and he looks forward to selecting the three SHU students who will study at MIC in the spring. He said it will be a competitive process because many students want an experience abroad at a prestigious university.

As the second-largest independent Catholic university in New England, and one of the fastest-growing private doctoral institutions in the U.S., Sacred Heart University is a national leader in shaping higher education for the 21st century. SHU offers nearly 90 undergraduate, graduate, doctoral and certificate programs on its Fairfield, Conn., campus. Sacred Heart also has a campus in Dingle, Ireland, and offers online programs. More than 10,000 students attend the University’s nine colleges and schools: Arts & Sciences; Communication, Media & the Arts; Social Work; Computer Science & Engineering; Health Professions; the Isabelle Farrington College of Education & Human Development; the Jack Welch College of Business & Technology; the Dr. Susan L. Davis, R.N., & Richard J. Henley College of Nursing; and St. Vincent’s College. Sacred Heart stands out from other Catholic institutions as it was established and led by laity. The contemporary Catholic university is rooted in the rich Catholic intellectual tradition and the liberal arts, and at the same time cultivates students to be forward thinkers who enact change—in their own lives, professions and in their communities. The Princeton Review includes SHU in its Best 388 Colleges–2023 Edition, and Best Business Schools–2022 Edition. Sacred Heart is home to the award-winning, NPR-affiliated radio station, WSHU, a Division I athletics program and an impressive performing arts program that includes choir, band, dance and theatre. www.sacredheart.edu

Thu Sep 15 , 2022
Austin, TX, September 7, 2022 — Madison Bratcher, whose daughter was enrolled for several years in Bridgeport Independent School District (BISD), withdrew her student after several negative experiences with the school. Her daughter was bullied, exposed to inappropriate sexual talk by other students, and mistreated in classes and on the […]