American higher education is undergoing a transformation as the nation hurtles from a national, analog industrial economy to a global, digital knowledge economy. The Industrial Revolution was the only other time in American history when the country and its colleges experienced change of this scope, duration and magnitude. A look back in history reveals how our colleges and universities are likely to change in the near future. It will be through a seven-step process that reveals how far we need to go to ensure that academe keeps pace with the changes taking place in our society. This step-by-step framework provides us the ability to keep score and determine what can be expected to occur in the years ahead.

Societies change more quickly than their social institutions, which were built for the passing era. In the emerging world, institutions work less well than they once did and are often perceived to be broken. They need to be refitted to meet the realities of the new society. Times of profound social change like the present and the Industrial Revolution demand equally momentous change in their social institutions. The refitting takes the form of transformation.

During the Industrial Revolution, the transformation occurred in seven messy, overlapping stages that are being repeated today.

First, the government, the news media and the public began criticizing higher education institutions, which had changed little since the founding of Harvard University in 1636 and continued to offer a program rooted in the trivium and quadrivium of the medieval university. They charged colleges and universities with having outdated programs, costing too much, being elitist and being slow or unwilling to change.

Second, most colleges and universities denied the charges and resisted all but the smallest changes.

Third, a number of institutions experimented and adopted reform initiatives focusing on updating the classical college through modernizing their curricula and adding new subject matter like science and modern languages, trying new instructional methods that departed from rote memorization, introducing new degree programs, and admitting more diverse students. Prior to the Civil War, most of those efforts failed.

Fourth, new institutions were created after the war. They embraced and modeled antebellum experiments. Cornell University offered “any student, any study.” The Massachusetts Institute of Technology pioneered efforts in applied science and technology. Johns Hopkins University was principally a graduate and professional school that championed research. Unlike the earlier experiments, which sought to reform existing colleges, these new institutions were replacements.

Fifth, the missions and practices of these institutions diffused to mainstream higher education with a prestigious institution, Harvard, and eminent president Charles Eliot leading the effort. Each institution adopted the variety of innovations in its own fashion, resulting in a grab bag of higher education practices. There was no agreement on subjects as basic as what constitutes a course.

Sixth, higher education took on the aura of the Wild West. The next order of business was standardizing practice. That was accomplished by establishing a self-policing mechanism called accreditation and a common academic accounting standard, which took the form of the Carnegie unit or credit hour.

The seventh and final step was scaling up and integrating the various pieces of standardized practice and policy to create the industrial era system of higher education, replete with universities, colleges and community colleges.

So where are we today?

We are now in the early stages of the global, digital knowledge transformation, somewhere between stages three and four. If this new transformation were a baseball game, we’d still be in the top of the third inning. Once again, government, business, funders, families and the news media are voicing demands for change. The issues are familiar: cost, failure to meet current needs and a reluctance to keep up with the times. What was referred to as elitism and a need for democratization in the Industrial Revolution has now become a cry for equity and access.

Most colleges and universities today believe the criticisms are overblown. But now as then, we’ve seen a cornucopia of experiments and reforms. Once again, institutions are introducing curricular changes in the form of competency- or outcome-based education, 24-7 access to content, and upskilling and reskilling education. There are new instructional methods like online education and any time/any place delivery. There are new credentials like badges and certificates, new funding schema like subscription pricing and free college, and a mushrooming number of nontraditional providers and distributors of higher education content — ranging from the media and high-tech companies to libraries and museums.

It is too early to speak definitively of models or diffusion — the fourth and fifth stages. Only historians can identify those. But candidates are emerging that could be models, such as Southern New Hampshire University and Western Governors University for online and competency-based education; the University of the People, which offers very low-cost degree programs; and Coursera, which combines all these elements.

If I were asked to make a bet as to how we might reach stage five — when a prestigious institution adopts and diffuses novel and timely practices — I would choose the Massachusetts Institute of Technology, a world-class university at the cutting edge of research and innovation, and its visionary president, Rafael Reif, to lead mainstream higher education into the future. It has already put its course materials online for the public, launched initiatives like EdX and micromaster’s degrees, and made a major commitment to artificial intelligence. A pivotal figure who could also be influential is Richard Levin, who, as CEO of Yale University and subsequently Coursera, is the only person to have been a leader in both mainstream higher education and the emerging order and can speak knowledgeably to and about both.

So far, there is as yet nothing to standardize practices (stage six) or integrate or scale them up (stage seven).

We still have many innings to go, with higher education getting more chances at the plate to meet the changes in society. But looking into the history of higher education shows us what is likely to happen to complete the transformation.

This is a moment that colleges and universities must not squander. We should not and cannot wait for the future to happen to us. Leaders must play a role in shaping what lies ahead — a future that focuses on standardizing the outcomes of higher education rather than the process, emphasizes learning over teaching, and is concerned more with the student than the teacher. The future will be driven by digital technology, the demands of a knowledge economy and the continued growth of nontraditional providers that can offer low-cost instruction anytime and anyplace and grant both degrees and certificates.

We have a chance now to shape the future that awaits our nation’s colleges and universities. Not since the Industrial Revolution has a generation been offered this opportunity.

Opinion | Why Remote Learning Is a Failure

Wed Jun 16 , 2021
Some educators sneered that the parents who complained just wanted free babysitting. But I’m not ashamed to say that child care is at the heart of the work I do. I teach children reading and writing, yes, but I also watch over them, remind them to be kind and stay […] 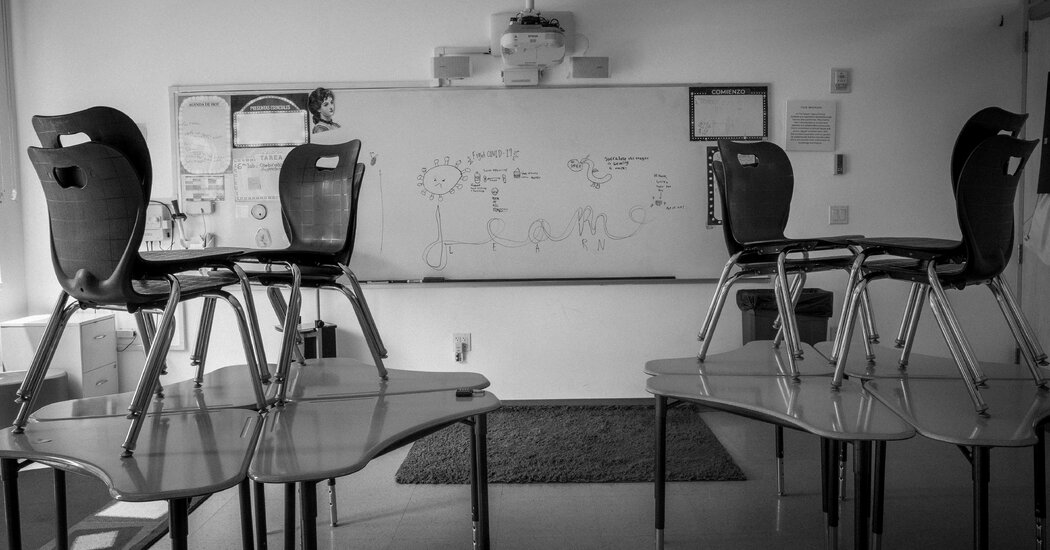