The Waray dwarf burrowing snake (Levitonius mirus), a new, ‘miniaturized’ genus and species of cyclocorid snake known from both Samar and Leyte Islands, southeastern Philippines, spends most of its time burrowing underground, usually surfacing only after heavy rains in much the same way earthworms tend to wash up on suburban sidewalks after a downpour.

The Waray dwarf burrowing snake lives a fossorial lifestyle and likely has a diet that is specialized on earthworms or other limbless invertebrates.

It has a maximum total length of 17.2 cm (6.8 inches), making it the smallest known species in the snake superfamily Elapoidea.

“The Waray dwarf burrowing snake has among the fewest number of vertebrae of any snake species in the world, which is likely the result of miniaturization and an adaptation for spending most of its life underground,” said Jeff Weinell, a doctoral candidate in the Department of Ecology and Evolutionary Biology and the Biodiversity Institute at the University of Kansas.

In the study, Weinell and colleagues obtained and analyzed genetic and morphological data from the mysterious snake.

They also used CT scanning to get a more precise look at its internal anatomy.

They found that the snake has a reduced number of scales on the head, heavily ossified skull, smooth and iridescent scales, small eyes and nostrils, and small neural spine of vertebrae.

“The discovery tells us that there is still so much more to learn about reptile biodiversity of the southern Philippines by focusing intently on species-preferred microhabitats,” said Dr. Marites Bonachita-Sanguila, a biologist in the Biodiversity Informatics and Research Center at Father Saturnino Urios University.

“Habitat loss as a result of human-mediated land use, such as conversion of forested habitats for agriculture to produce food for people, is a prevailing issue in Philippine society today.”

“This new information, and what we will learn more in future studies of this remarkable little creature, would inform planning for conservation action, in the strong need for initiatives to conserve Philippine endemic species — even ones we seldom get to see.”

“We need effective land-use management strategies, not only for the conservation of celebrated Philippine species, like eagles and tarsiers, but for lesser-known, inconspicuous species and their very specific habitats — in this case, forest-floor soil, because it’s the only home they have.”

The discovery is reported in the journal Copeia.

Fri Dec 25 , 2020
Organizers of a job fair in Iksan, North Jeolla Province, pose on Oct. 22. (Iksan City) SEJONG — A growing number of South Koreans have abandoned looking for jobs as the pandemic worsens a hiring market that was already tightening for several years. According to a survey on the working […] 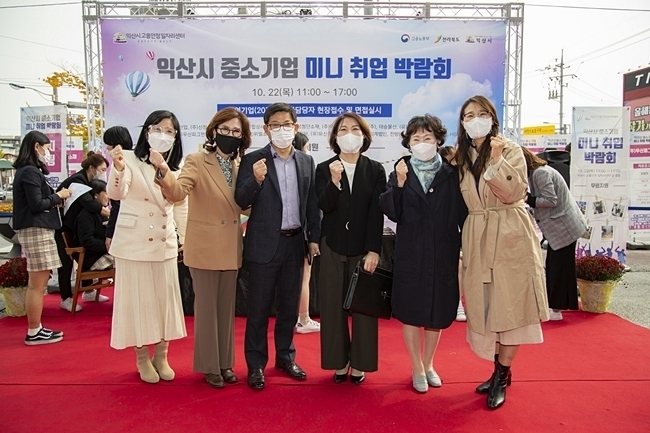