The Royal Photographic Society has revealed the winners of its Science Photographer of the Year competition, which celebrates the stories behind scientific exploration and application.

The competition attracted more than 1,000 entries by amateur and professional photographers, from microscopic observations to images showing climate change in action.

The photographs are on display at a virtual exhibition, as part of Manchester Science Festival.

Here are the winning images, along with a selection of runners-up.

Simon Brown won the General Science category with an image of the wreck of SS Thistlegorm, a ship sunk in the Red Sea in 1941.

The ship is a well-known recreational diving site and is slowly becoming part of the local coral reef.

The image was made from 15,005 frames that were tagged with GPS data and merged together.

“Combining art with science is a perfect creative storm, where data and visual interpretation come together and present a view of the world in a completely new way,” said Brown.

An orthophoto is an aerial picture which has been adjusted so the scale is uniform.

Katy Appleton’s image shows sunlight casting a spectrum on to a wall, having passed through a prism.

“I was very excited and surprised when I found out that my image had won,” Appleton said, after her success in the under-18s category.

“It is a very simple image and I think that this shows that anyone can take part in science photography, no matter their age or how much equipment they have.”

“Climate change is real and polar ice is melting at an alarming rate, posing a serious threat to wildlife and humans worldwide,” said Flood.

“I hope that many people will see the photograph and that it helps convey the need for urgent action on climate change – by individuals, companies and governments.”

Raymond Zhang’s photograph shows a concentrated solar power station in China, where the heat from reflected sunlight is used to make steam to drive generator turbines.

“I am very excited about winning and hope that more young people like me can start to pay more attention to climate changes,” said Zhang.

Richard Germain’s image shows a spherical lens placed inside a patterned tube, distorting the light passing through it.

Solmaz Daryani’s photograph shows two boys trying to rescue their potato crop from a field in Bamiyan, Afghanistan, after a flash flood.

The Net Strangling the Ocean by Rafael Fernandez

Christian Lünig photographed some of the 149 xenon arc lamps that form the Synlight experiment, in Jülich, Germany.

The lamps create a light intensity 10,000 times greater than the incident radiation from the Sun, and are used in experiments into making fuels, such as hydrogen from water.

Wojciech Nawrocki captured a close-up view of coral that has been affected by bleaching.

An increase in water temperature can cause corals to expel algae living in their tissues, turning them white.

Nuno Perestrelo’s photo shows scientists carefully removing rock from the fossilised vertebrae of a dinosaur that was discovered in the Lo Hueco area, near Cuenca, Spain.

Images from the Royal Photographic Society’s Science Photographer of the Year competition are on display at Manchester Science Festival’s virtual exhibition, from 12 February until 2 May 2021.

Mon Feb 15 , 2021
Best Buy told store employees this week that it is cutting jobs and reducing their hours. The Richfield-based electronics retailer declined to give details of job changes, but it has said that its workforce needs to evolve. “We don’t generally comment on specific personnel matters,” the company said in a […] 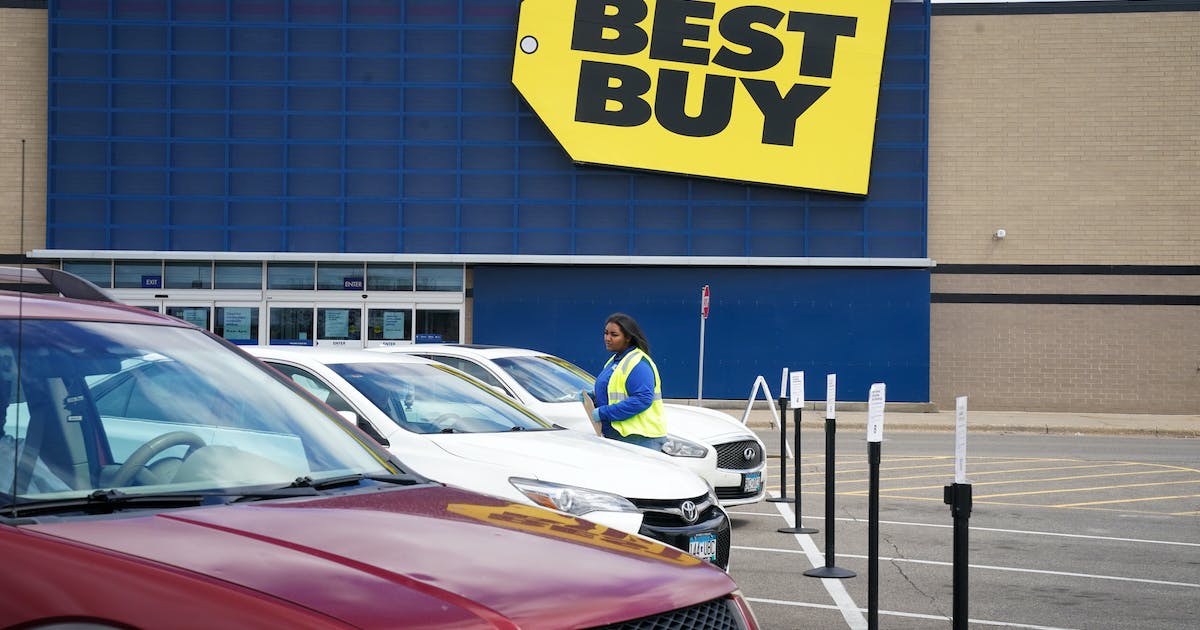