The decision may impact negotiations with the Legislature over teacher bonuses.

Salt Lake City will delay reopening its junior high and high schools in early February as planned, postponing any in-person return to classrooms until after teachers can get both doses of the COVID-19 vaccine.

The decision came just before midnight Tuesday after nearly four hours of debate by the city’s board of education. Members bickered back and forth, often interrupting each other and parsing each word of the controversial proposal before it passed 5-2.

“What we’ve done tonight is basically throw everything into limbo,” announced board member Kristi Swett — who opposed the delay — when the discussion finished.

The vote calls into question an agreement that the district made with lawmakers to allow secondary students to return so that teachers could collect a $1,500 bonus. The extra money was offered by the state for educating kids during the pandemic.
The bonuses were withheld from the Salt Lake City School District, which is the only one in Utah to have its classes entirely online this fall. The Republican-led Legislature has strongly disagreed with that, and new Gov. Spencer Cox has called it a “huge mistake,” adding that virtual learning is damaging children. The district agreed to reopen in person in exchange for teachers getting the bonus and the vaccine. Then the shots got delayed.

When the district made the deal it was told its teachers would be vaccinated on Jan. 8 and 9. And it intended to reopen secondary schools on Feb. 8, about a week after educators would receive the second dose and be considered fully inoculated.

But delays by the federal government in shipping the vaccine to Utah have pushed the immunizations back to the end January or early February for all school staff, who are slated to get them after medical personnel and long-term care residents.

Interim Superintendent Larry Madden said Tuesday that the district always intended to get teachers and students back to the classroom as soon as possible, suggesting that in-person instruction is best for learning. He wouldn’t have negotiated returning, he suggested, if he didn’t feel comfortable with it.

“I don’t have anything to lose,” he said, noting that his leadership position is temporary. “I don’t need to appease the Legislature.”

Other members, though, said they didn’t appreciate being pressured into going back before they felt it was safe.

“Our arm is being twisted,” said Mohamed Baayd, who is newly elected to the board.

He added that he couldn’t support reopening schools without the safeguard of vaccinations that teachers were promised. And most of the board members agreed. Returning will be contingent on when both doses of the vaccine can actually be administered.

It’s unclear what will happen with the bonuses now. But the Salt Lake Education Association told the board in a letter that teachers in the local union don’t care about the money. They want their health to be the priority, and most want to continue instructing online while cases of the virus remain high in the capital.

“I’ve heard from a lot of teachers, but I did not hear from one teacher who said that they’d like to go back and get the money,” added board member Katherine Kennedy.

Joel-Lehi Organista, another new board member, said, “If they don’t want to go back, we shouldn’t force them. … A lot of people are scared. That’s real.”

The board had also considered a measure to delay elementary students from returning. Members first voted late last year to have the youngest kids in the district start returning on Jan. 25. No changes were made to that plan, however, and they will still be able to come back to school at the end of the month — even with the likelihood that their teachers will not be vaccinated by then.

The district has looked at data from the other four districts in Salt Lake County, which all reopened. It showed that the coronavirus transmission rate has been the same for elementary students learning in the classroom as it has for the kids in Salt Lake City who have stayed home. With that information, the district has felt comfortable moving forward with allowing them to return.

But the numbers diverge significantly for secondary schools. Older kids, the health department found, are spreading and contracting COVID-19 at a much higher rate when they return to school compared to when they login virtually. And the data didn’t account for teachers, who are at a greater risk.

“It’s just not safe,” pleaded Edward Sanderson, a senior at West High, who asked the board to keep junior high and high schools online until the virus is more contained.

“Your choice to return in person could kill my family,” added 17-year-old Vishal Jammulapati, another student who spoke to the board Tuesday.

Online learning, he said, hasn’t been ideal; it’s better, though, than jeopardizing getting sick or spreading the virus to someone else in the community. Sanderson, Jammulapati and their friends started a petition with more than 1,000 signatures to continue with virtual classes.

About 900 people watched the board meeting Tuesday night, which was streamed on YouTube. The discussion mirrored the deep divide in the community. Two moms spoke during the public comment period about how they want to have the option for their kids to return in person and see their friends. Right now, one said, her kids are suffering emotionally with staying at home.
The other pointed out that many students — about 1,500 — have left the district this year, with many families electing to transfer to neighboring districts that are offering face-to-face classes. A group of parents also filed a lawsuit, urging Salt Lake City to reopen. That’s currently pending in court.

The board members who wanted secondary students to resume in-person classes also argued that grades have been severely declining during remote instruction.

“Remote learning is difficult,” said Board President Melissa Ford, who also voted against the delay. “There are some students we aren’t reaching.”

She stressed that a number of high school seniors are at risk of not graduating. And she pushed for secondary students to return on Jan. 27 at the start of the term to give them time to make up credits.

Baayd, who has three kids in the district — one each in high school, middle school and elementary school — said he doesn’t want students to fall behind, adding that board members are in a tough spot. They shouldn’t have to make these decisions, but he believes they’ve been forced into it.

“The leadership on the national and state level, unfortunately, has failed everyone here,” Baayd said.

Jessica Johnson, a mother and EMT, echoed that, noting that she doesn’t feel a vaccine will fix everything — but making sure teachers get it first will make her feel safer about sending her daughter back to school.

Until that point, the board voted to continue allowing some secondary students into classrooms in small groups, especially if they’re failing or need additional help. The district will also start a “Stop the Spread” campaign to educate the community about ways to mitigate COVID-19 transmission.

When the vaccine is administered to educators and students do return — though there’s no set date — interim Superintendent Larry Madden said everyone will be required to wear masks. The district will enhance its cleaning procedures and install Plexiglass barriers, according to his draft proposal.

There will also be cameras in every classroom so teachers can livestream lessons for those students who elect to continue learning online.

Wed Jan 6 , 2021
A MUM-of-three has shared her eight-year-old’s assessment of her first day of homeschooling during the coronavirus pandemic and it’s not good. Candice Kennedy is in lock down with her family in America and she took a photo of her son Ben’s thoughts about her first attempt at playing teacher. 3 […] 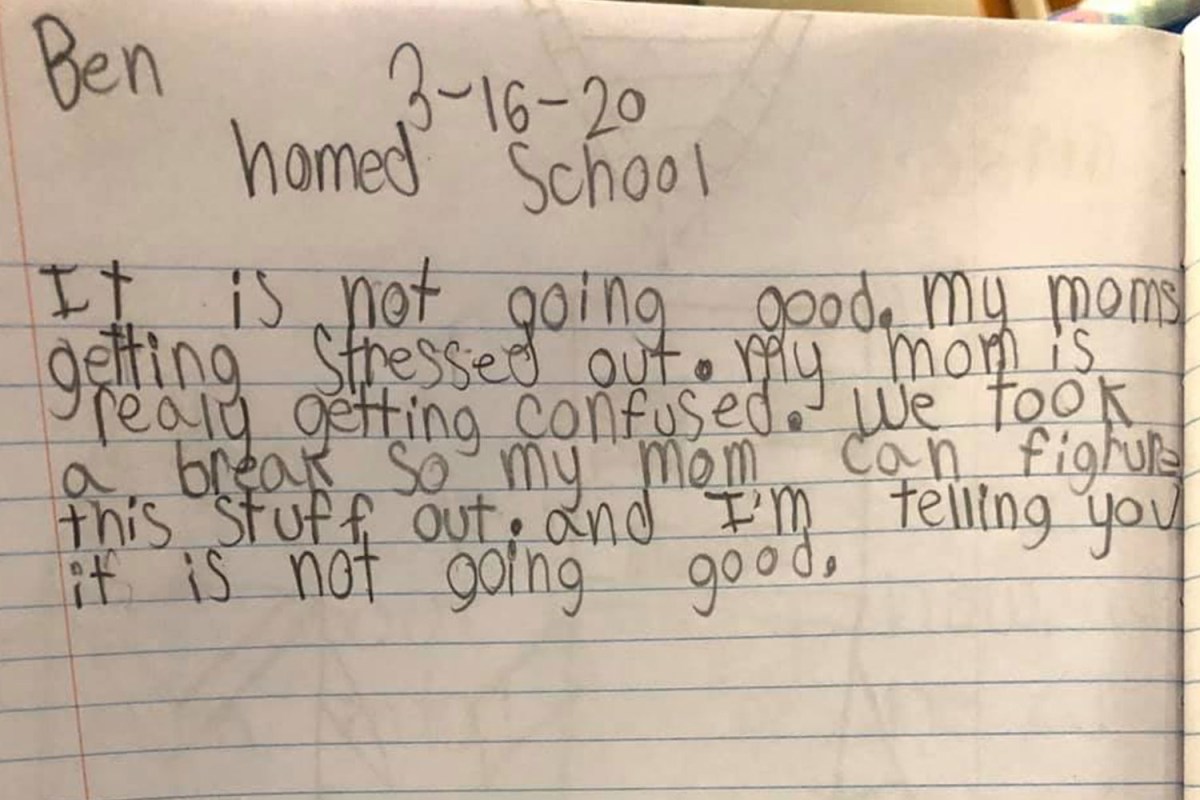