One month before his term expires, President Donald Trump has revived a moribund federal education research advisory panel by appointing eight members who appear to have no expertise in the subject area.

The National Board for Education Sciences (NBES) provides guidance to the director of the Institute for Education Science (IES), the research arm of the U.S. Department of Education. But the lack of a quorum on the 15-member presidentially appointed board has prevented it from meeting since the waning days of the Obama administration.

That lengthy presidential snub of the panel was part of a broader effort by the Trump administration to shrink government that resulted in a reduced flow of scientific advice to various federal agencies.  That effort has had a particularly dramatic impact at regulatory agencies such as the Environmental Protection Agency, where the administration dismantled or dramatically reshaped several science advisory panels. For education researchers, a mothballed NBES deprived them of a high-level conduit for using their methodological expertise to help shape federal policies meant to improve education outcomes for all students.

The eight newly appointed members – combined with three Trump named in November 2019—will allow the board to get back to work. But former board members and leading figures in the field say the new cohort lacks the scientific qualifications to carry out the panel’s responsibilities. They also decry the timing.

“What a disgrace,” says Adam Gamoran, president of the William T. Grant Foundation, who served a 4-year term on the NBES that ended in 2015. “This is part of Trump’s effort to sabotage the board during the transition to the next administration.”

The new NSEB members are part of three waves of presidential appointments (here, here, and here) announced in the first 10 days of this month. Several have previously served in the Trump administration or were involved in the president’s 2016 and 2020 campaigns. And a few come with heavy political or ideological baggage.

The member with arguably the highest public profile is John Yoo, a law professor at the University of California, Berkeley. He served in the Department of Justice under President George W. Bush, and authored the so-called “torture memos” that provided the legal justification for the war on terror waged in the aftermath of the September 2001 attacks. Yoo has also been vocal in defending Trump’s action during his impeachment and in his attempts to overturn the results of the 2020 presidential election.

Two other appointees–Michael Anton and Larry Schweikart—have also stridently defended Trump against what they see as existential threats to national security posed by liberal politicians. Anton spent a year at the National Security Council before becoming a regular presence on social media, and Schweikart, who retired in 2016 after 30 years as a history professor at the University of Dayton, is the author of “48 Liberal Lies about American History” and “A Patriot’s History of the United States.”

Some of the new members have backgrounds in banking or international finance. Michael Faulkender is an assistant secretary at the Treasury Department for economic policy on leave from the University of Maryland, and applied economist Steve Hanke has been on the faculty at Johns Hopkins University for 52 years and served on the Council of Economic Advisors under President Ronald Reagan.

“I’m an educator, that’s my life,” says Hanke, citing his efforts to improve the financial literacy of U.S. students as relevant to the board’s mission. He says he’s never interacted with IES and doesn’t know any of his new board colleagues but anticipates that service on the board will be “a worthwhile endeavor.”

Michael Feuer, dean of education at George Washington University and a former president of the National Academy of Education, says that education researchers often disagree on the best approach to improving student learning, but that their arguments are grounded in empirical evidence.  He worries that might not be the case for many of the new board members.

“The partisan orientation is rather obvious for some of them,” says Feuer, whose term ended in 2018. “There is also the expectation that someone appointed to the board has some credibility in the field, as either a producer or a user of education research, and also a significant connection to evaluation and assessment.”

He and others note that the first cohort of Trump appointees to the board, announced in November 2019, easily met those requirements. They are Chester Finn, president emeritus of the Thomas Fordham Institute; David Francis, a statistics professor at the University of Houston; and Joe May, chancellor of the Dallas County Community College district.

The lack of such credentials among the latest appointees is especially unfortunate at this time, says Felice Levine, executive director of the American Education Research Association, the nation’s leading professional organization of scientists working in the field. “It’s outrageous that this is happening now, in the midst of a pandemic that has disrupted schooling everywhere,” she says. “It’s a sad commentary on this administration’s lack of appreciation for how scientific knowledge can benefit the country.”

Although four seats remain to be filled, the board now has more than enough members to resume its work once the paperwork is completed. They all hold 4-year terms.

Correction, 12 December 2020, 11:34 a.m.: This story has been revised to remove an incorrect association between Steve Hanke and the ongoing debate over reforming U.S. math education. He has not been involved in those efforts.

My name is Gigi Gerstenberger. I'm an Ayusa.org Community...

Tue Dec 15 , 2020
My name is Gigi Gerstenberger. I’m an Ayusa.org Community Representative living in Sharon Township but my territory covers 120 miles. I want to share with you the need for host families in the 2021/2022 school year. For 40 years, Ayusa has brought over 40,000 high school students to the US. […] 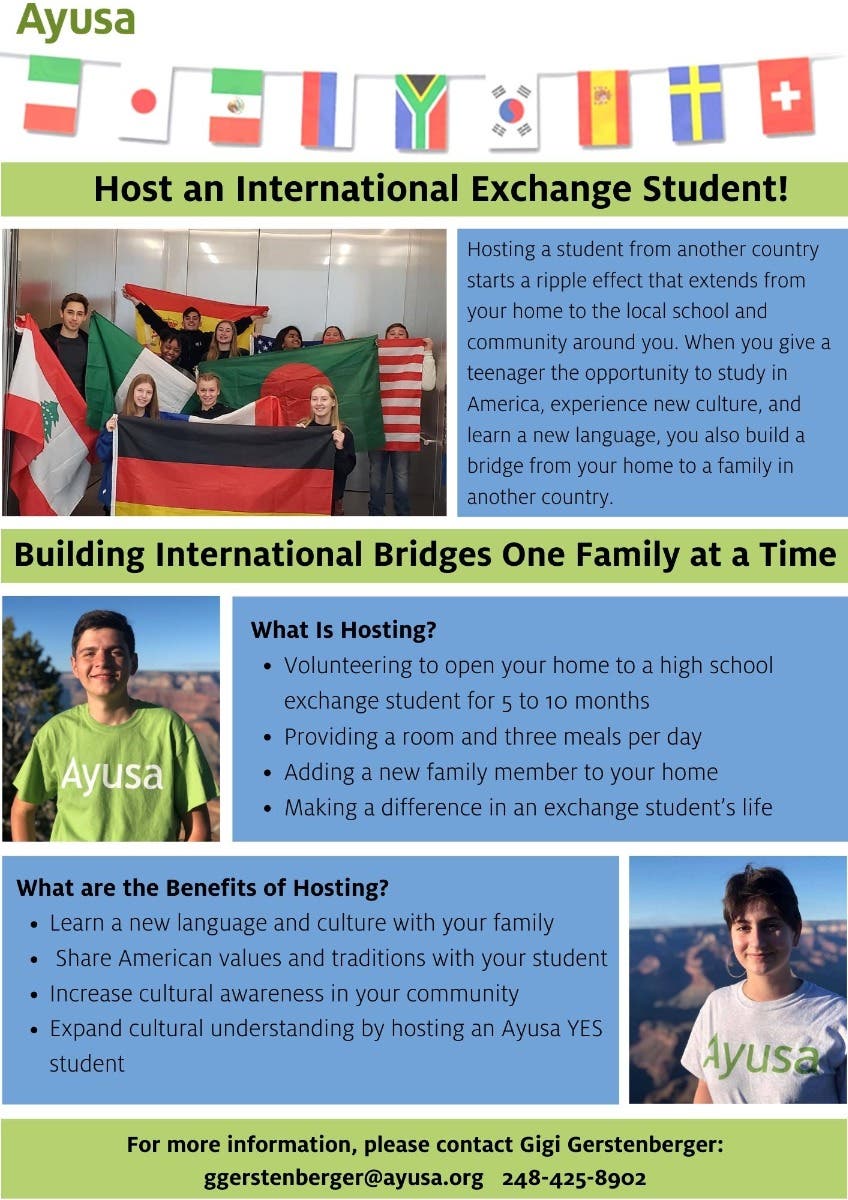