Since 2019, Rep. Bobby Scott, D-Va., has served as chairman of the House education committee, and will do so again in the next Congress. Scott was one of the architects of the Every Student Succeeds Act. As the leader of the committee, he has put a priority on highlighting the benefits of school integration, providing more support to historically disadvantaged students, and robust federal oversight of school performance. In an interview earlier this month, we asked Scott about a change to federal law dealing with school segregation, whether schools need more COVID-19 relief, and the extent to which schools should be held accountable for their performance during the 2020-21 school year.

This Q&A has been edited for length and clarity. The interview took place before President Donald Trump signed the COVID-19 relief package and before President-elect Joe Biden officially announced that he would nominate Connecticut Education Commissioner Miguel Cardona to be U.S. secretary of education.

I wanted to ask you about the provision in the spending deal that removes the federal prohibition on using funds for things like busing to address school segregation. People are wondering how you and other Democrats managed to get this into the new government funding deal. Can you discuss why you made it a priority and the history behind it?

Well, you can’t get something in a bill by yourself. I think there was a general agreement that provisions that support school segregation are inappropriate in the U.S. code in the year 2020. We don’t have to go back in history about how they got there. It’s certainly time for them to be removed.

Why do you think it represents something that could be a positive for schools, and how could schools use the removal of the prohibition effectively to help schools and students?

Part of the value of the legislation is to send a signal that the federal government is a partner in school integration and not a barrier to school integration. It’s clear that segregated schools create segregated opportunities. Students do much better in integrated school settings. As we learned in 1954, segregated educational facilities are inherently unequal. We should not be promoting segregation. … This action sends a signal that we should do something about it. School desegregation helps close the achievement gap.

Provisions that support school segregation are inappropriate in the U.S. code in the year 2020.

Can you talk about the recent coronavirus relief deal , its pros and cons? And what do you say to educators who say that it doesn’t do enough?

They’re right. We need more money. Part of the problem is the lack of state and local aid, which means states and localities under financial strain because of the pandemic will be cutting local funding because they have to balance their budgets. And education will obviously be adversely affected. So whatever you put into education, a lot of it will go to offset cuts.

The $54 billion will go a long way toward making sure we can open schools safely. Everybody knows that students are better off when schools are open. Their achievement is significantly better. You don’t learn how to get along with people if you’re sitting at home. Students do better when they have access to school meals. You can identify child abuse when students are showing up every day. And frankly, you’re not going to reopen the economy until you reopen the schools. You can’t open the schools safely without resources. If you’re spreading children out in the classroom, that requires smaller class sizes. That’s going to cost more money. If you’re not going to have as many people loaded on the bus, that requires more trips. That requires more money. You have more cleaning to do.

We’re going to be right back in January doing budgets for the next round. One of the things we’re going to have to look at is how much learning loss has occurred. There’s no question that the achievement gap has gotten worse. A lot of students have fared poorly under this distance learning, and there’s a lot catching up that has to take place. One of the first targets has got to be: What are we going to do this summer? … We can fund catch-up services. Students have lost the better part of a year already.

I didn’t agree with much that Secretary DeVos did. But when she denied the waivers on assessments, that’s one very important action that she took. A lot of localities said: It’s hard to do assessments. She said, do the best you can. If we don’t know how far behind these students are, we won’t know how much work we have to do to catch up.

Everybody knows that students are better off when schools are open. Their achievement is significantly better. You don’t learn how to get along with people if you’re sitting at home.

You and Sen. Patty Murray [the Washington senator who is the top Democrat on the Senate education committee] have made it very clear you want states to administer summative exams this year to uphold educational equity and to know where students are. But would you support schools getting a break from other federal accountability requirements under ESSA, like identifying low-performing schools for example, if states do administer those exams in some form?

If they took federal money, they have an obligation under ESSA. We give them flexibility on how to do it, but no flexibility on the requirement that they do assessments, ascertain the achievement gap, and have a credible plan to do something about it when they see disparities. That’s the law.

Obviously we’re in difficult times. But we have to do the best we can on assessments. I know Virginia has tens of thousands fewer students enrolled in schools this year than they did last year. You have work to do. You can’t be casual about it.

Just so I’m clear: You’re expecting states to not only give assessments, but to do things like identify low-performing schools as they’re required to under ESSA, and other accountability requirements? You don’t want to get a break from that? Because that’s what some folks are saying they want.

The identification of a low-performing school isn’t just for cosmetic purposes. It’s to identify where work needs to be done. We can discuss what sanctions there may be. But we have to know where the problems are. Once you’ve done the assessments, you can’t just have a low-performing school. What are you doing about it?

A well-educated workforce is an essential element for economic development. We have people who are losing a whole year. You cannot be casual about this. You have to take it seriously. You have to do everything you can. That’s going to mean resources. … You can’t just tell cash-strapped states and localities that they’ve got to cancel summer vacation. For the federal government, if we’re going to suggest that, we’ve got to help pay for it.

The identification of a low-performing school isn’t just for cosmetic purposes.

I think there’s a priority that should be available for people who have to go to work. And obviously if you’re going to open the schools, that’s obviously a top priority. I think there’s a consensus that health care workers should be first. Nursing homes, because of the outbreaks and higher mortality rates, should be a high priority. But if you’re going to reopen the schools, you have to have teachers.

U.K. Mourns the End of Erasmus Program in Wake of Brexit

Tue Dec 29 , 2020
After his university in Scotland shut down in the spring because of the coronavirus, forcing him to study online from home, Jack Boag kept up his spirits by dreaming of what awaited him in the coming academic year: a semester abroad at the University of Amsterdam. But his hopes of […] 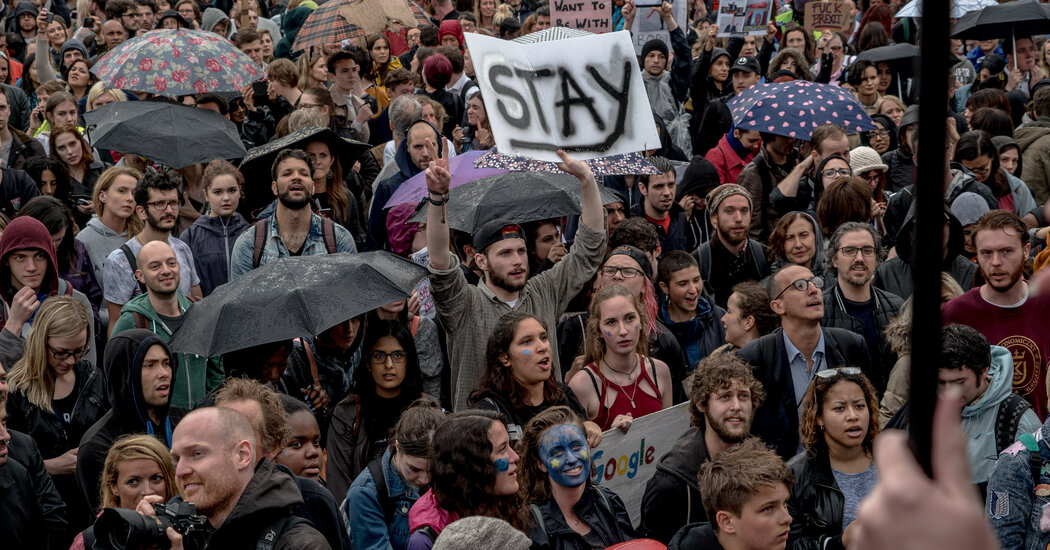