PLYMOUTH – With six children under the age of 13, Kathy Bom Conselho faced a difficult decision as the town contemplated a return to classes last summer.

Bom Conselho already had issues with the multiple platforms and programs her four school-age children had been learning under last spring. The Manomet woman learned the hard way that the Chromebook the district sent home with her oldest child last spring didn’t have parental controls.

Bom Conselho didn’t relish the thought of having her children spending so much time on computer screens anyway, but the prospect of keeping her incoming first-grader connected with her teacher and classmates from home finally forced her hand.

Before the start of the district’s return to school under a hybrid model in September, Bom Conselho and her husband decided their family would be better off if she homeschooled their children this year.

They were not alone.

About 100 Plymouth children are homeschooled during a normal school year. The district saw a low of 77 homeschool plans in 2005 and a high of 127 in 2008. Over the last six years, the average has been 106 children.

But with schools operating on hybrid programs and the potential for a return to full remote learning always a possibility during the COVID-19 pandemic, many families embraced homeschooling as a reasonable alternative.

As schools reopened on the alternating schedule last fall, more than 200 children had been signed up for homeschooling plans. And the numbers only increased into winter, with 221 homeschooling plans now approved by the Plymouth School Committee.

“We’ve doubled the number in this one year basically,” said Sean Halpin, the district’s director of student support services, who has overseen homeschooling in Plymouth since 2011.

Halpin said the state gives school districts great leeway in how they will handle homeschooling plans. In Plymouth, the plans must be approved by the School Committee as well as the administration for students ages 6 to 16. Families are required to provide progress reports quarterly.

Halpin said 10 of the 221 approved plans for this year have either returned to classes or moved out of the district.

Years ago, many families homeschooled for religious reason. Before COVID-19, more and more families simply took its as an obligation to educate their own. Now at least half are in it because of the pandemic.

It can seem daunting at first, but veteran homeschoolers as well as newcomers say it is also intuitive and rewarding. A key ingredient appears to be curiosity.

Jennifer McDonough-Floyd started homeschooling eight years ago when her son, now a sophomore in high school, was starting third grade.

McDonough-Floyd said her boy was very inquisitive and enjoyed exploring subjects in depth, so she decided to try offering him a project-based earning program that would individualize learning. That first year, she said, was like being thrown into the middle of an ocean during a storm as she tried to navigate through the sea of potential education plans available.

She settled on a packaged curriculum that suited her son’s interests in history and math. She combined coursework with learning opportunities she found online, like classes available through the Edgerton Center at the Massachusetts Institute of Technology. The center offers science-based programs for students whether they are in school or homeschooled and will even develop a course if enough people are interested.

McDonough-Floyd’s son, now 15, has gone back to the classroom and is a sophomore at Sturgis Charter School, in Hyannis, but she is still homeschooling. Her daughter, now a seventh-grader, has been homeschooling since first grade and is uncertain whether she’ll ever return to the traditional school model.

McDonough-Floyd runs a Facebook group called South Shore Homeschoolers that had 500 to 600 members from Cohasset to Sandwich before the pandemic. The group helps families get started with homeschooling and connects them with programs and activities, while offering support for meeting educational goals.

Since last spring, the number of members has risen to more than 1,000, as families look for an alternative to the hybrid learning models that are so prevalent in the region this school year.

McDonough-Floyd said the increase has been crazy, but she hopes interests will remain high once the health crisis eases.

Bom Conselho has already started sending her children back into schools.

Her seventh-grader went back to middle school after he got an individualized educational plan that will offer specialized attention he would not have received through the computer-based hybrid learning model.

Bom Conselho has three other school-aged children – a first-grader, a third-grader and a fifth-grader – and two even younger children – a 2-year-old and a newborn – still at home.

Isolating the family after the baby first arrived last fall played into the family’s decision to keep the children safely at home.

But Bom Conselho grew up in a military family and had experience with homeschooling as a child, so she knew it was possible to teach and learn at home without a major reliance on a computer. She found a program for her elementary school children that is largely based on a textbook format and adapted it to meet her children’s needs.

She works individually with each on basic concepts, switching from one child to another, while the children practice skills on their own. For the most part, her faith-based curriculum has been sufficient, although Bom Conselho added a different math component for her fifth-grader.

Her fifth- and third-grader started transitioning back to school in January and will return under the hybrid model in March, after the family returns from a visit with relatives in Florida.

Bom Conselho said homeschooling is still a work in progress. It hasn’t been ideal, but it has been the best option for her family in a difficult year.

“We have to remind ourselves the reason why we do it,”  Bom Conselho said. “It’s hard and not my personal comfort zone. It’s not something I love, but we’re doing it because it’s best for our family at this time, and I think we’ve given ourselves flexibility.”

She said she expects all four of her school-age children will return to the classroom if the pandemic eases and life returns to normal.

Jessica Fitzgibbons, a mother of two elementary school students, is still not sure what the future holds for her girls.

A former eighth-grade English teacher, Fitzgibbons hadn’t taught for four years when the pandemic hit last spring. Fitzgibbons said she has nothing against her daughters’ school or teachers, but she didn’t want her girls sitting in front of a computer on their remote learning days and decided that in an uncertain year, homeschooling was worth trying.

Rather than following a packaged curriculum, Fitzgibbons consulted state frameworks of learning for her third- and first-graders and developed her own curriculum that would incorporate everything the state expects her children to learn.

She said it was a learning experience for her as well, as she came to understand that the school day did not have to be rigid and structured, but could be shaped in ways that allow her girls to learn from virtually everything they do – from making muffins for breakfast to taking a walk and exploring the wildlife and nature down by the river that runs behind their home.

“Once upon a time I would have thought I’d be very regimented,” Fitzgibbons said. “You do this at this time of day. You go to school your whole life and you become accustomed to that routine, but I found that the intuitive way of doing things is the best way to do things.”

Over time since last fall, she set aside her concrete lesson plans and started incorporating learning different concepts into everything she did with her daughters. Making breakfast expanded into math and English lessons as the girls measured ingredients, created menus and then “sold” their muffins to mom and dad, making change from cash.

Kicking a soccer ball became an opportunity to practice math facts as mom would rattle off an addition or multiplication problem before making a pass. The girls would supply the correct answer before passing the ball back.

Fitzgibbons fit in plenty of time for reading, which her girls love anyway, but made it fun by designing projects around the subject matter. Last week they made a fort for reading. The next day they deconstructed a poem and used the same rhythm to make Valentine cards for their grandmother.

After watching a travel documentary, the girls made an itinerary to take their Barbie dolls on a trip to Italy. They learned about the country and composed travel brochures. They also put math skills to work by skip counting as they booked airplane seats and then accounted for the time differences between their home and their overseas destination.

“Learning just kind of happens, and every day can be fun. We’re able to learn through playing by putting what they need to know into their playing,” Fitzgibbons said. “I’ve become more loosey-goosey because I’m finding it’s just happening naturally.”

Like Bom Conselho, Fitzgibbons said she doesn’t know what to expect when the health crisis eases and students can go back to school full time. Her oldest is very social and has always embraced school, while her first-grader is still a bit clingy.

“In talking to my kids, I wouldn’t be shocked by two different answers, and that’s something I’ll have to figure it out – now that we’ve entered this whole new world, are we staying in or not?” she said.

McDonough-Floyd is facing the same decision, even though COVID-19 isn’t a factor. Her daughter has been taking about following her brother at Sturgis, but also enjoys the opportunity to travel with her rugby club when she likes and is uncertain if she will go on to high school or continue her studies at home.

The final decision will be personal, but McDonough-Floyd knows her daughter will have benefited as much as her son from the choices inherent in homeschooling.

“He had the freedom to learn everything he wanted and as deeply as he wanted,” McDonough-Floyd said. “It was so much richer of an experience, and I got to know him as a person.”

The Military Wants To Produce Water From Air. Here’s the Science Behind It

Wed Feb 10 , 2021
A promising new way to extract drinking water from air could change how U.S. troops hydrate in remote locations — and might even relieve regional water-scarcity tensions.  On Thursday, General Electric announced that it has received $14 million under DARPA’s Atmospheric Water Extraction project to continue developing a device that […] 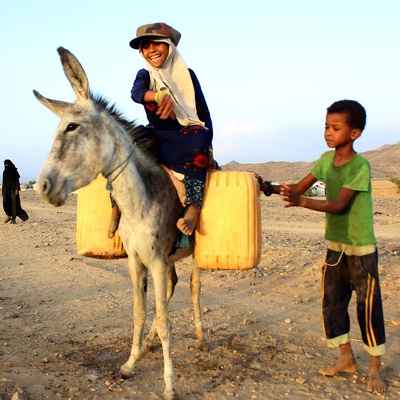