Two 9-year-olds played tag and chased each other around the playground at Commons Park in Royal Palm Beach on a recent Friday morning.

“The thing about it is, every day is pajama day,” Nathaniel Trzasko said.

“Oh yeah!” his friend Matthew Gilbert replied. “You could just spend the whole day in your pajamas — unless you go outside.”

In this case, they were outside, and it wasn’t “pajama day” — it was “park day” for the homeschooling co-op Palm Beach County Homeschoolers.

Nathaniel, who goes by Owl, has always been homeschooled. His parents chose this educational alternative for him long before the COVID-19 pandemic gave a lot of families a taste of what it could look like to learn from anywhere — at home, the park, even the intracoastal.

“Sailing lessons at the Palm Beach Sailing Club, jiu-jitsu, soccer and basketball,” Owl’s mom, Cheryl Trzasko said, listing the activities more easily accommodated by her son’s homeschooling schedule. “He doesn’t do well sitting down for hours because he’s 9 and active.”

Trzasko has been running the Palm Beach County Homeschoolers since 2009. During the pandemic, she also started a statewide Facebook group, “Homeschooling Florida Style.” It’s grown to more than 10,000 members.

According to a WLRN analysis of school district data, nearly 8,000 more students are being homeschooled in South Florida now than before the COVID-19 pandemic. The shift, which is also reflected nationally, means more flexibility for some families but fewer students and resources for traditional public schools.

“Homeschooling, to steal the term of a friend of mine, is a freedom space that a lot of people never knew about,” said Brian Ray, president of the National Home Education Research Institute, a nonprofit based in Oregon.

That freedom is becoming more and more attractive to parents. Ray said the number of homeschooled students across the country has jumped from 2.5 million in 2019 to 3.7 million today.

School districts are funded based on enrollment, so when students leave traditional public schools, the schools lose money. That means less resources for the students who stay. Representatives from all four South Florida school districts — Miami-Dade, Broward, Palm Beach and Monroe counties — would not agree to interviews about how the growth of homeschooling has affected their bottom line.

Anna Fusco, president of the Broward Teachers Union, is concerned about the fiscal impact. Dwindling enrollment at public schools threatens teachers’ salaries as well as staff positions like teaching assistants, counselors and cafeteria workers, she said. Also at stake are electives like music, foreign languages and culinary arts.

“If the funding is not there, it does affect every little piece in the schools and in the school district,” she said.

In September of 2021, she said she joined other Broward teachers going door to door in an attempt to persuade parents who had left the district to send their kids back.

“We wanted them to know it was safe to come back,” she said.

‘It’s just so free’: Why families are choosing homeschool

“The mask mandates dropping made both me and my husband really uncomfortable,” she said. “My husband was actually a school teacher and he also quit teaching due to the pandemic, amongst other reasons.”

The group makes sure kids get to experience a lot of the things they would at a traditional school, like a science fair, a geography fair, a talent show, and a yearbook. And, of course, “park days” like the recent one in Royal Palm Beach provide a chance to socialize and make friends.

“I think it’s just so free and you get to do whatever you want,” said Matthew Gilbert, one of the 9-year-olds, who said he became “big friends” with Nathaniel Trzasko through the group.

“You just get to relax and do school, and you just get to take your time,” Matthew said. “My parents give me the books and I teach myself.”

“Obviously, when he needs assistance, we come in,” his mom, Idania Gilbert, added, “but he’s usually pretty good on his own.”

Nathaniel’s mom, Cheryl Trzasko, who leads the group, also created a statewide Facebook group called Homeschooling Florida Style during the pandemic — and it has grown to almost 10,000 people. She shares information about homeschooling rules, paperwork and curriculum.

“Homeschooling is a very individualized thing,” Trzasko said. “Some people go out and buy books and use those to teach their kids. Some people find online programs. Some people have gotten together with some other families and join forces and trade who’s teaching or maybe even hired a teacher.”

In Florida, homeschooling is loosely regulated. There are no educational or certification requirements for teachers, no list of required subjects, and no set schedule or required number of hours students have to spend learning.

Students do have to be evaluated by a certified teacher every year, either by taking a standardized test or submitting a portfolio for review.

“In this day and age, everybody knows homeschoolers. It’s no longer disreputable. You’re no longer a pirate. It’s a mainstream thing. Shucks, it’s really trendy now to homeschool,” Edelson said.

That trend is reflected throughout the country and in South Florida. Throughout Miami-Dade, Broward, Palm Beach and Monroe counties, nearly 8,000 students switched to homeschooling during the pandemic and haven’t returned to traditional schools, according to public records obtained and analyzed by WLRN.

Homeschoolers now make up between 3 and 4% of the total student population in Broward and Palm Beach Counties. In Miami-Dade, the homeschool number used to be under 1%, and now it’s closer to 2%.

While these percentages may seem small, they represent a significant number of students, as South Florida is home to some of the largest school districts in the country. In total, there are now more than 22,000 homeschooled students in the three largest counties.

In the Florida Keys, a much smaller district with unique geographic challenges, homeschoolers now account for more than 6% of all students. The number learning from home in Monroe County has doubled since the onset of the pandemic.

Nearly 200,000 students are now enrolled in Edelson’s online homeschool program, and he says the pandemic is only one of a number of reasons parents have been leaving public schools in droves. Others include changes in vaccine requirements and the anxieties of high-stakes testing.

“It’s often regrettable and I don’t really love to cite it. But school violence, of course, scared a lot of parents,” he said. “And all those active shooter drills terrified a lot of kids and had them switch to homeschooling.”

The program keeps track of her grades and files paperwork with Broward County Public Schools, the district where they live.

Her son, Kaleb, is in eighth grade and is enrolled in Florida Virtual School. Virtual school enrollment has also steadily increased statewide since the pandemic.

The Limontes relocated from Virginia to South Florida about a year ago, and they’ve lived in RV parks in Palm Beach and Broward counties.

“We RV life,” she said. “We do homeschool because I can’t find an area that I’m okay with the school system and the cost of housing. So we’re doing it our way.”

“We can paddleboard up the Oleta River, or we can boat across the Okeechobee,” she said.

Kaleb Limonte loves that he can go outside whenever he wants.

“You can take a break real quick, go on a run, and come back with a fresh mind,” he said, “and the assignment is a lot easier and less stressful.”

The Limontes move around a lot, so it’s been hard for the kids to make new friends. Ellie, 10, said she’d like to go back to a traditional public school eventually, so she could see her friends more. Kaleb said he wants to try high school.

“I might even stay there until graduation,” he said. “But until then, I’ll be doing homeschool.”

Mon Jul 4 , 2022
A new type of battery for electric vehicles can survive longer in extreme hot and cold temperatures, according to a new study. Scientists say the batteries would allow EVs to travel further on a single charge in cold temperatures – and they would be less prone to overheating in hot […] 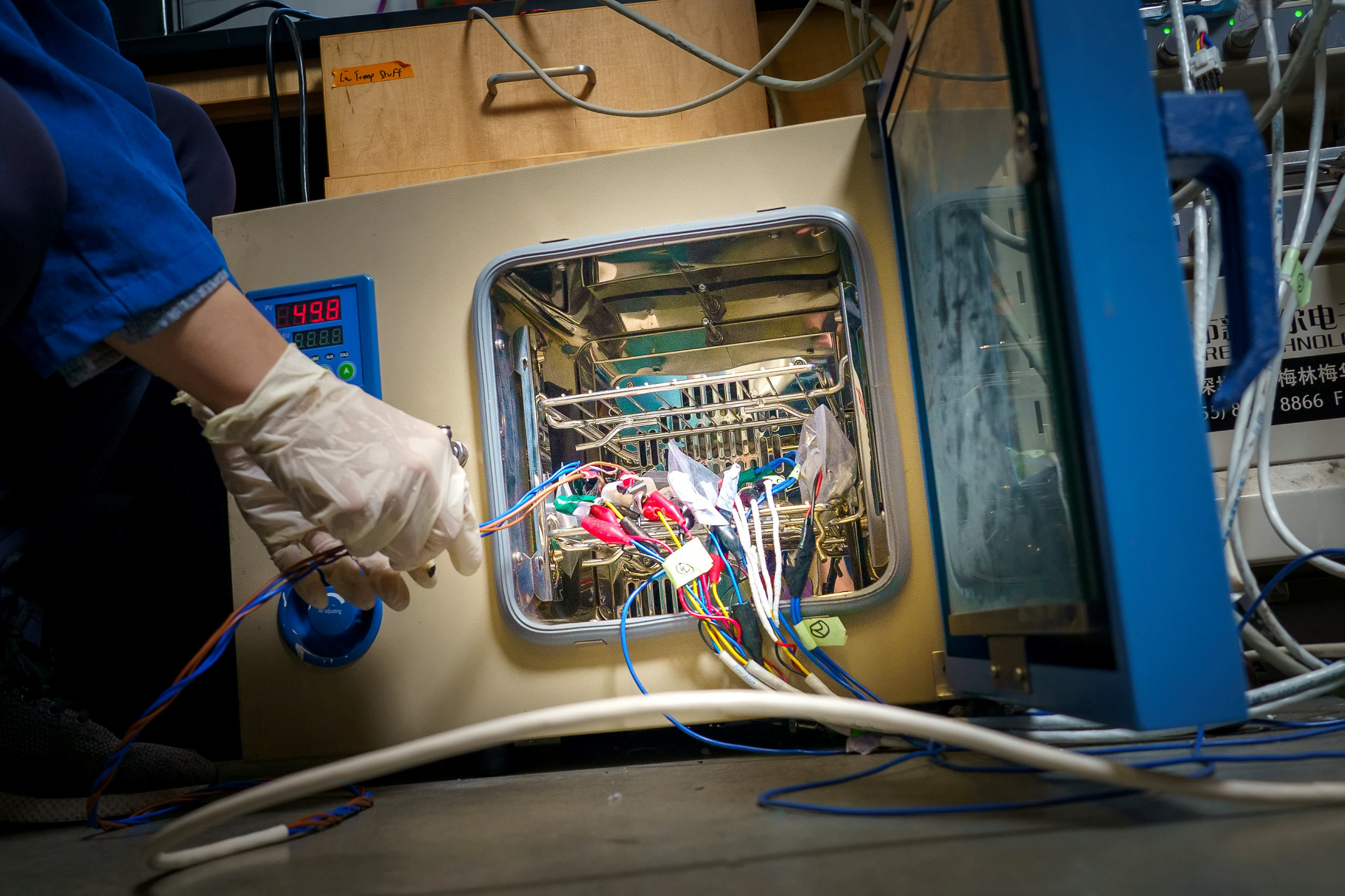