A Moncton mother believes differences over homeschooling between the province and school district not clear — and they’re keeping her son out of class.

The boy has not been in school all year due to the COVID-19 pandemic. Ayre said they were worried his medical conditions, combined with large class sizes at schools in her area, would make him at higher risk of illness and infection.

Ayre said she would like to homeschool her son.

She said she spoke with Anglophone School District East, which told her she did not have the proper medical paperwork for the application.

Ayre said Dominic was hospitalized with pneumonia and she has his diagnosis documented.

“That’s not good enough,” Ayre said of the response from the school district. “They want a written letter from a doctor. I’ve called every clinic in the Moncton area and every office has said they’re not writing letters for the school — for kids with health issues for them not to go to school or to be homeschooled — because their office has been overwhelmed with demand for it.”

Ayre said her family moved to a new home to enroll Dominic in a French Immersion program with a class of only seven or eight students.

His first day was Wednesday, but after just a few minutes, he was told he was not eligible because he hadn’t been in immersion before.

“It took us three weeks to get him pumped up enough to go to this school,” she said. “He finally gets there and then he got humiliated, so he does not want to go back to school because now his anxiety is through the roof and he’s just…..he’s not having it.”

Ayre said her son’s right to an education is being denied as they continue to seek answers one month into the new school year.

Stephanie Patterson, the director of communications for Anglophone School District East, told Global News in an email Thursday the district could not comment on Ayre’s situation specifically.

However, Patterson did say the province’s Return to School Document (RTSD) indicated “students who cannot attend school in person due to a vulnerability or a vulnerability of somebody in their home, can receive support from the school for home learning and maintain a connection to their school once they present a note from any physician (not necessarily a primary care physician) indicating that they cannot attend school in person.”

But an email from the Department of Education and Early Childhood Development seemed to contradict that information.

“As part of the Return to School plan, districts and schools will work with the families of medically vulnerable (immunocompromised) students to develop a plan to ensure that they have consistent access to education, based upon their needs and situation,” said Tara Chislett, a communications spokesperson for the department.

“Students with a significant medical condition are encouraged to consult with a health care provider to determine whether it is safe for them to attend school or if learning at a distance would be more appropriate.

“Families can choose to homeschool their children for any reason. Medical information is not required.”

5:38Tips for parents on how to homeschool

Tips for parents on how to homeschool

One month into homeschooling, one Manitoba mother explains how they’re doing - Winnipeg

Tue Oct 13 , 2020
Thousands of Manitoba students are homeschooling this year, with about an additional 1,500 students learning from their houses. The Manitoba government says numbers from this year show at least 5,152 students have signed up for homeschooling since Sept. 11. Read more: Coronavirus — More Manitoba families looking at homeschooling for […] 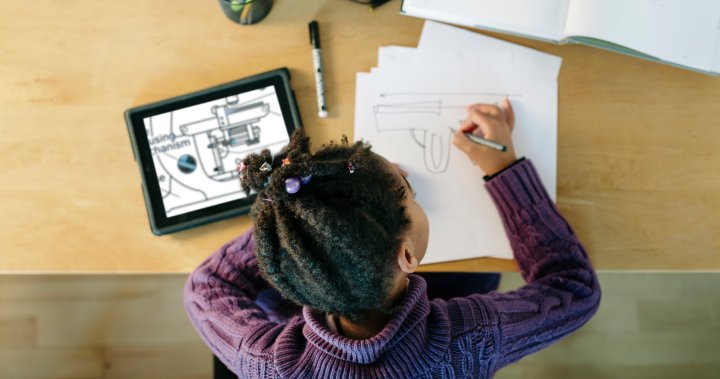