McCarthy acknowledged that “we live in a world that is flush with violence.” But he moved quickly to a question at the heart of his lesson plan: What am I going to do about it?

“It can be a small thing — help somebody, offer a kind word here and there,” he said. McCarthy is a former monk and has also been a columnist and editorial writer at The Washington Post. He has interviewed many esteemed peacemakers, such as Dorothy Day, Archbishop Desmond Tutu and Mother Teresa, and has corresponded with Trappist monk Thomas Merton.

“I remember Mother Teresa telling me, ‘Very few people will ever do great things, but all of us can do small things in a great way,’ ” McCarthy said.

Before our talk, I had visited a teddy-bear memorial at the corner of 57th Place and Southern Avenue in Southeast Washington. On Dec. 2, gunmen fired on a passing car and struck one of the occupants — Carmelo Duncan, age 15 months, who died while strapped in his infant seat.

Count me among those who’d like to believe that peace is possible, but reality keeps getting in the way.

There’s a $60,000 reward for information leading to the arrest of the people responsible for killing Carmelo. Just an anonymous tip — a small thing, as McCarthy put it, that could help bring justice, a prerequisite for peace. But apparently, even that is asking too much for some people.

“You need to educate people,” McCarthy said. “That’s why I’m in the schools. Education, from the Latin ‘educere,’ meaning to lead out. To lead people out of their ignorance. Violence is a learned behavior. So is peacemaking. You can teach alternatives to violence.”

But we have to start with baby steps, because, he said, so many students are being “miseducated.”

“They may know about STEM subjects [science, technology, engineering and math] but nothing about STEPS [sociology, theology, ethics and peace studies]. We are graduating people who are peace-illiterate.”

McCarthy began teaching the theory and practice at area high schools and universities in 1982. Mostly free. Two years later, he and his wife, Mavourneen, co-founded the Center for Teaching Peace, a D.C.-based nonprofit that works with schools to create peace studies programs.

This pandemic-scarred September was the first time in 38 years that he had not started the school year in a classroom. And there is so much to discuss — such as the 10 federal death row inmates who have been executed since July.

Back in the late 1980s, I’d written a column in support of the death penalty. And I heard from McCarthy, then a colleague, soon afterward. In February 1991, he invited me to take a trip with him and some of his students from the University of Maryland. They were headed to Virginia’s Mecklenburg Correctional Center to meet a death row inmate named Joseph M. Giarratano, who was scheduled to die a few days later.

I also met Marie Deans, a peace advocate extraordinaire who died in 2011. She helped teach inmates about nonviolence and made news after publicly forgiving the man who had been convicted of killing her mother-in-law. She also founded an organization that promoted reconciliation for families of murder victims.

Based on the holes in the prosecution’s case that I learned during that trip, I wrote another column saying Giarratano at least deserved a new trial. Not long afterward, then-Gov. L. Douglas Wilder commuted the death sentence to life in prison.

I’d moved into the anti-death-penalty camp.

But after seeing those soggy teddy bears tied around a light pole in the District, and knowing that Carmelo’s killers were still on the loose, I imagined how I’d feel if the slain child had been mine. What would I consider justice? I could feel my anti-death-penalty resolve begin to falter.

To McCarthy, such doubts, however fleeting, just make the case for more peace studies in schools.

“We say we love peace and democracy, but we are delusional, kidding ourselves,” McCarthy said. “We are the world’s leading purveyor of violence, as Martin Luther King noted back in 1967. And it’s still true today. We have a violent government and endless wars. On the dollar bill, we put ‘In God We Trust.’ But that is a lie. It ought to read, ‘In Bombs We Trust.’ ”

The lesson concluded the way his classes usually do.

“You’ve got homework tonight,” he said. “Go tell somebody you love them. I know that sounds ridiculously small, almost inconsequential given the magnitude of the problems going on. But there are so many unloved people out there, and if you could say a kind word to them, it would be a big step forward.”

He was not talking about season’s greetings, but everyday recognition that peace comes from love.

And lest I happened to forget while celebrating the birth of Christ, McCarthy added, “Remember, Jesus was a victim of capital punishment too.”

Wed Dec 23 , 2020
It wasn’t until several weeks ago that Christopher Lamar discovered he was failing most of his classes. Lamar, an 18-year-old senior at Lake Nona High School in Orlando, Florida, had always enjoyed being a student. He ran for homecoming; he started a spirit club. Things changed once classes went online […] 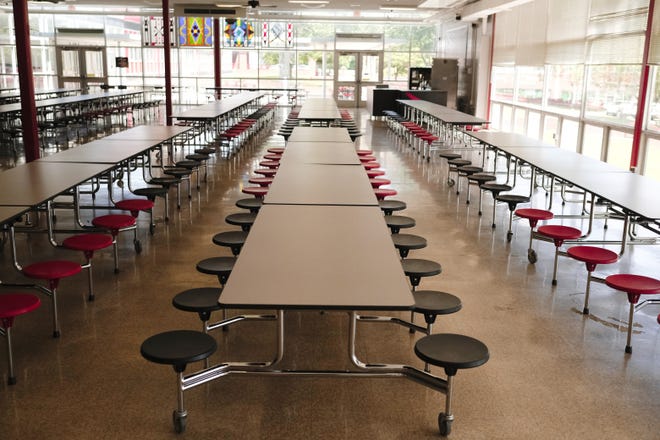