Linda Zall played a starring role in American science that led to decades of major advances. But she never described her breakthroughs on television, or had books written about her, or received high scientific honors. One database of scientific publications lists her contributions as consisting of just three papers, with a conspicuous gap running from 1980 to 2020.

The reason is that Dr. Zall’s decades of service to science were done in the secretive warrens of the Central Intelligence Agency.

Now, at 70, she’s telling her story — at least the parts she’s allowed to talk about — and admirers are praising her highly classified struggle to put the nation’s spy satellites onto a radical new job: environmental sleuthing.

Dr. Zall’s program, established in 1992, was a kind of wayback machine that looked to as long ago as 1960. In so doing, it provided a new baseline for assessing the pace and scope of planetary change. Ultimately, it led to hundreds of papers, studies and reports — some classified top secret, some public, some by the National Academy of Sciences, the premier scientific advisory group to the federal government. The accumulated riches included up to six decades of prime data on planetary shifts in snowfall and blizzards, sea ice and glaciers.

“None of this would have happened without her,” said Jeffrey K. Harris, who worked with Dr. Zall as director of the National Reconnaissance Office, which runs the nation’s fleet of orbital spies. “You have to decide if you’re going to break down the wall or climb over it, and she did a little bit of both.”

Some of her biggest fans are surviving members of her team of 70 elite scientists whom Dr. Zall recruited to sift through and analyze mountains of images from a secret archive. The storehouse was accumulated mainly as a byproduct of Washington’s spying on adversaries from space as a means of distinguishing threats and propaganda from deadly capabilities.

“She was an amazing leader,” said Michael B. McElroy, a planetary physicist and professor of environmental studies at Harvard. “She had energy and enthusiasm and a wonderful ability to communicate with people” — as well as the tact to handle large egos. “Having this woman from the C.I.A. telling them what to do wasn’t easy. It was amazing to watch her.”

The top-secret images that Dr. Zall succeeded in repurposing for environmental inquiries came from satellites that were some of Washington’s crown jewels. The spy satellites would zero in on such targets as deadly weapons and render images that in some cases were said to be good enough to show a car’s license plate. The first reconnaissance satellite, known as Corona, was launched in 1960. Federal experts have put the overall cost of its hundreds of successors at more than $50 billion.

An accident of fate let the fleet assess a top environmental concern — the extent to which vast expanses of Arctic and Antarctic ice were retreating. Many spy satellites orbit on north-south paths that pass close to the poles so that, as the planet turns, the vast majority of Earth’s surface passes beneath their sensors over the course of 24 hours. Thus, their many paths converge near the poles.

Spies had little use for sweeping Arctic and Antarctic images. But they dazzled environmentalists because Earth’s poles were fast becoming hot spots of global warming and melting ice.

“It gave us the first real measurements of the ice budget — how much loss you have from season to season,” said D. James Baker, who directed the National Oceanic and Atmospheric Administration from 1993 to 2001 and served on Dr. Zall’s C.I.A. advisory panel.

In normal science, where collaborators share credit, Dr. Zall might have been listed on papers as a co-author or even a lead author. But not in a twilight zone where science was part open, part secret. For decades, hers was a hidden hand.

Dr. Zall’s environmentalism for the C.I.A. began in 1990 when Vice President Al Gore, then a Democratic senator from Tennessee and now a leading climate-change activist, wrote a letter asking the agency to examine whether the nation’s spy fleet might address environmental riddles. The agency put Dr. Zall onto the question. Quickly, she saw how the nation’s archive of surveillance observations could also serve to strengthen assessments of Earth’s changing environment.

“I worked night and day,” Dr. Zall recalled. “I was fascinated.” The secret information, she added, boded well “for all the things I loved.”

The oldest of three children, Linda Susan Zall grew up in North Hornell, N.Y., a village nestled in rolling farmland near the Finger Lakes. Her childhood was spent outdoors raking leaves and speeding through the countryside on sleds and toboggans, bikes and boats.

“I didn’t try to love nature,” Dr. Zall recalled. “I didn’t know anything else.” She lived for snow. “We’d build forts and play in the hills and nearly kill ourselves.”

Her father, the manager of a large dairy, moved his family to Ithaca, N.Y., in the mid-1960s so he could study for a doctorate in food science at Cornell University. She liked what she saw. In 1976, she graduated from Cornell with a Ph.D. in civil and environmental engineering.

Her mentor at the university, Donald J. Belcher, was a pioneer in applying aerial photography to engineering questions, such as where to build houses and cities. Dr. Belcher was hired by Brazil to pick the best site for its new capital, Brasília.

He put his graduate student onto an aerial project in Alaska that sought to assess changes in permafrost — ground that’s usually frozen but in some places was starting to thaw. “I had my face glued to the window,” Dr. Zall said of viewing the continental wilderness during her flight to Fairbanks. “It was mind-blowing. I get goose bumps thinking about it.”

After Cornell, Dr. Zall gained a higher perspective. Civilian surveillance satellites such as Landsat were flying hundreds of miles up to take images of the planet for farmers, geographers and other specialists. From 1975 to 1984, she worked for the Earth Satellite Corporation. Based in Washington, D.C., it used computers to enhance Landsat images, making their details more accessible.

Dr. Zall then vanished into the C.I.A. It was 1985 — a bruising last chapter of the Cold War — and American satellites were playing outsize roles in scrutinizing Moscow. She used her skills to improve the analysis of reconnaissance images and to plan new generations of spy satellites.

In 1989, she took on a new assignment as the C.I.A.’s liaison to the Jasons — a group of elite scientists that advise Washington on military and intelligence matters. Its ranks would eventually supply her with contacts for top environmental scientists.

Then, quite suddenly, in late 1991, the Soviet Union disintegrated. Its collapse diminished not only a main threat to Washington but also a top rationale for maintaining a fleet of costly spy satellites.

New uses beckoned. But the prospect of training spy satellites on environmental questions faced vast resistance from the deeply entrenched fiefs of the intelligence world that were built on decades of colossal budgets.

As Mr. Gore pushed, Dr. Zall provided answers. She wrote a highly classified report describing what the secret reconnaissance could do for Earth science. “Spy Satellite Photos May Aid in Global Environment Study,” The Associated Press reported in May 1992. The article made no mention of Dr. Zall.

By October 1992, the C.I.A. was so confident in the ability of spy satellites to solve environmental mysteries that it established a large task force. Dr. Zall was put in charge and recruited its members, mainly Earth scientists. In the face of some bureaucratic foot-dragging, she named her group Medea, after the headstrong character of Greek mythology who let nothing stand in her way.

“She wanted to understand nature,” recalled Jeff Dozier, a snow hydrologist at the University of California, Santa Barbara, and an early recruit. “She was really curious. She also was very good at drawing us out.”

The ensuing rush of satellite imagery “changed my life,” Dr. Dozier said. For the first time, he was able to monitor wide shifts in snow cover, especially in the Sierra Nevada Mountains, one of his main interests. “That has affected me ever since,” Dr. Dozier said. His findings inform a textbook he published last month with three colleagues, “Lakes and Watersheds in the Sierra Nevada of California.”

As Medea picked up speed, Dr. Zall found herself deeply involved with an old foe. As part of the post-Cold War thaw, the Clinton administration wanted to engage Russia with new projects and better relations. The Soviets, it turned out, had amassed a treasure of Arctic ice data.

The negotiations to share the trove involved top officials from both sides, starting with Dr. Zall. “I went to Moscow probably 10 times and St. Petersburg twice,” she said.

Her first visit took her to a mansion on Moscow’s outskirts. She rode a tiny elevator made of ornate ironwork that opened to a large room full of vases, Oriental rugs and chandeliers. Five men met her, including a general.

“It was really intimidating,” she said. “I was a satellite wonk. They all spoke perfect English. They were extremely warm and inclusive.” In time, that initial meeting was part of a series that helped broker a peaceful new era.

In early 1995, Medea was the driving force when President Bill Clinton ordered the declassification of more than 800,000 spy-satellite images, including ones for mapping and area surveillance. Taken from 1960 through 1972, the images showed not only airfields and missile bases but also giant swaths of land marked by deforestation and environmental ills. An image taken in 1962 revealed the Aral Sea before an ecological catastrophe left it bone dry.

Medea also fostered a parallel movement for the Navy to release once-secret information that illuminated inner space — the ocean’s sunless depths. In late 1995, a new map of the seabed was unveiled that bared riots of deep fissures, ridges and volcanoes.

“This was the first, uniform map of the global seafloor,” said John A. Orcutt of the Scripps Institution of Oceanography in San Diego. That breakthrough, he added, became the initial source for the kinds of detailed ocean topographies that are now visible to everyday users of Google Earth.

President George W. Bush’s administration and conservatives in Congress, questioning the scientific consensus on global warming, let Medea languish for many years. But in late 2008 it was revived in cooperation with a Democratic Congress, and continued by the Obama administration.

Dr. Zall then focused on how Earth’s changing environment would most likely prompt security issues and crises. In late 2009, the C.I.A. set up a Center on Climate Change and National Security. Its mission was to help American policymakers better understand the impact of floods, rising sea levels, population shifts, state instabilities and heightened competition for natural resources. News reports announcing the program again made no mention of Dr. Zall.

She retired from the C.I.A. in 2013. Medea was never the same. The agency shut it down in 2015, and the Trump administration made sure there was no revival of the program.

In interviews, former Medea members said the incoming Biden administration might want to establish a similar panel for helping the world push ahead on knotty issues of environmental change.

Dr. Zall agreed, adding that Medea’s agenda was in fact unfinished. She said her group, knowing that Earth’s fate might hang in the balance, wrestled for years on how to monitor climate treaties. She called the problem “very difficult” and argued that its resolution was even more important today.

'The Bachelor' contestants all seem to have reputable jobs this season, except one

Wed Jan 6 , 2021
This season, exiting limos at Chateau at Nemacolin, is a stunning group of women, who unlike seasons past with extremely creative professional titles, seem to have legit and respectable jobs. (Well, except, perhaps, one.) Bachelor Matt James himself is a banker from Raleigh, North Carolina, who host Chris Harrison says […] 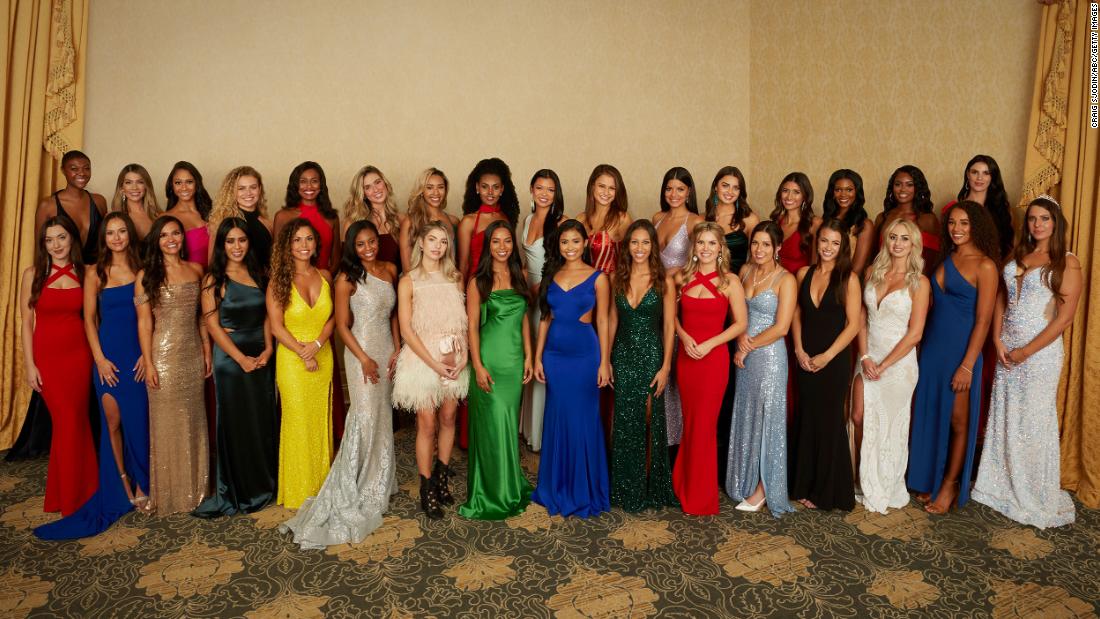