Likely sparked by the COVID-19 pandemic in 2020, the trend of parents and families entering into the homeschooling arena continues to grow as an alternative form of education.

Pre-pandemic, between 2007-19, 3% of households reported homeschooling students. By the 2020-21 school year the U.S. Census Bureau’s Pulse Survey indicates that 11% of surveyed households were homeschooling at least one of their children.

“Because of COVID, because of parents seeing classes online, I think it sort of gave them more freedom to make choices about their children’s education,” said Debbie Landry, a board member of Homeschool Alabama, a homeschool advocacy and resource group, which she said the group has fielded increased calls for assistance in the last two years.

The Pulse Survey indicates that homeschooling among Black households saw the largest growth since the pandemic.

As of February 2020 3.3% of surveyed households were homeschooling, but by the following school year (2020-21), more than three times the number of Black households, nearly 11%, had at least one homeschool student.

“Usually after the school year starts families will realize that traditional public schools are not working for their child,” said Sandra Kim, marketing and media relations director for Home School Legal Defense Association, a nonprofit aiding homeschooling families through legal representation. “I imagine probably depending on when the start (of school) is on the part of the country there’s like another wave of people who are homeschool curious. Everyone calls for different reasons … children might go back to school feel anxiety or they may not feel like their child is ready for that grade or they’re not following along.”

The CDC’s Household Pulse Survey conducted in August 2021 indicated that of the more than two-thirds of homeschooled students whose parents selected one or more of the following as a reason for homeschooling, 80% had a concern about school environment, such as safety, drugs, or negative peer pressure; 75% desired to provide moral instruction; 75% indicated an emphasis on family life together; and 73% of parents expressed a dissatisfaction with the academic instruction at other schools.

Homeschooling is an option in all states, but regulations vary. For example, in Alabama there are no mandated subject or assessment requirements. Homeschooling is also allowed through church or private schools, which can establish their own policies for teacher qualification, days of instruction, and required school subjects. Homeschooling can also be done through private tutors, who must be Alabama-certified teachers, for at least three hours per day for 140 calendar days.

“So we adopted a set of graduation standards that were somewhat similar to Alabama standards, but we didn’t we didn’t like when they went to four by four academics,” Landry explained. “We didn’t want go up to that because not everybody needs for maths or something like that. If you’re using the private school law, you make your own choices, but generally you’ll have parents who will try to individualize their instruction for their kids. Like if you have a child who has special needs, and a lot of people will homeschool because their children are special needs, then you want to individualize his or her requirements are what they need.”

Landry homeschooled her now three adult children through an Alabama church homeschool and continued on the benefits of homeschooling.

“You have some students who are definitely interested in trades and so their parents will individualize their instruction for the trades for whatever they’re good at,” she explained. “I’ve got one family whose dad is an electrician and has his own company. He said, ‘My son may go to college if he wants to, but he’s gonna know how to be an electrician too.’ So you do have those kinds of freedoms to you know, just pursue the child’s interest.”

Georgia only has a “home study” program option, requiring the teaching parent, guardian and any tutor in a home study program to have a high school diploma or a GED. There are requirements that reading, language arts, mathematics, social studies and science be part of a curriculum with 180 days of education for at least 4.5 hours per day. A homeschooled child must be tested at least every three years, beginning at the end of the third grade.

Kim said some states have more stringent requirements to homeschool than other states, such as several states in the Northeast like New York, and parents often reach out to the Home School Legal Defense Association when issue arise in communicating with schools system.

“New York, right now is what we call our busy season where people are calling in and they’re having trouble…,” explained Sandra Kim, marketing and media relations director for Home School Legal Defense Association. “So one family sent in a note of intent to homeschool and they had a few kids, and they said (the school system) rejected it. and they said you have to send in one for each child but that’s not actually what (the New York law) says.”

“I think every method of education is important and good for people. I’m not gonna say there’s one way only. There are parents who don’t see any need for anything else. You know, their kids are doing fine where they are, they’re gonna keep them there …” Landry said. “I do think public school parents need to be involved, they need to know who their school board members are, they need to attend their school board meetings, they need to be just aware of what’s going on. and so even if I were a public school parent, I would still would want to know what’s going on in my local schools.”

With more parents and guardians choosing to homeschool, some public school districts have seen a decrease or stagnancy in student enrollment.

“Trying to get a real estimate of what’s real as far as enrollment’s concerned has been difficult. That’s been across the state. Everyone I’ve talked to, COVID kind of changed the game as far as enrollment was concerned,” said Adam Hathaway, superintendent of Tift County Schools in South Georgia. “I have seen a trend over the last 10 years where more and more people are picking that option — and it’s not only homeschool, let me be clear about that. Georgia Cyber Academy and the other online schools that are available … I have seen people picking those options, not to do traditional school.” Since 2019, Valdosta City Schools has seen a decrease in enrollment by nearly 200 students through 2021, though unclear if it is due to homeschool enrollment.

Overall, data received by the Georgia Department of Education indicates an increase in declaration of intent (to home study) forms received. For the 2019 school year, more than 75,000 student DOI submissions were received online (The numbers do not include other forms of DOI submissions). In the 2021 school year, that number jumped to more than 91,000 student DOI received, according to GaDOE data. Last school year, however, began seeing a slight increase in enrollment in public schools.

“The enrollment drop we experienced during COVID (from the 2019-2020 school year to 2020-2021) was primarily concentrated in the early grades, particularly kindergarten — which is not compulsory in Georgia,” said Kimberly Wetzel, communications specialist for GaDOE.

Some districts have seen static numbers during and subsequent to the pandemic.

“For the last several years, Lowndes County Schools has maintained an enrollment of well over 10,500 students,” Lauren Pope, Lowndes County Schools Director of Public Relations. “Despite the unprecedented variables in recent years, our consistency in numbers reinforces that our families see the importance of in-person learning. With this in mind and community growth, we expect to see an increase in enrollment.”

Due to the shift in an increase in families choosing a nontraditional school setting, Hathaway said the Tift County district has looked into redefining school curriculum by including online models for student learning.

Reporter Davis Cobb of the Tifton Gazette and Brittanye Blake of the Valdosta Daily Times contributed to the report.

Thu Sep 22 , 2022
Using ultrapowerful lasers, scientists have blasted cheap plastic and transformed it into tiny “nanodiamonds” — and, in doing so, confirmed the existence of an exotic new type of water. . The findings could potentially reveal the existence of diamond rain on ice giants in our solar system and explain why […] 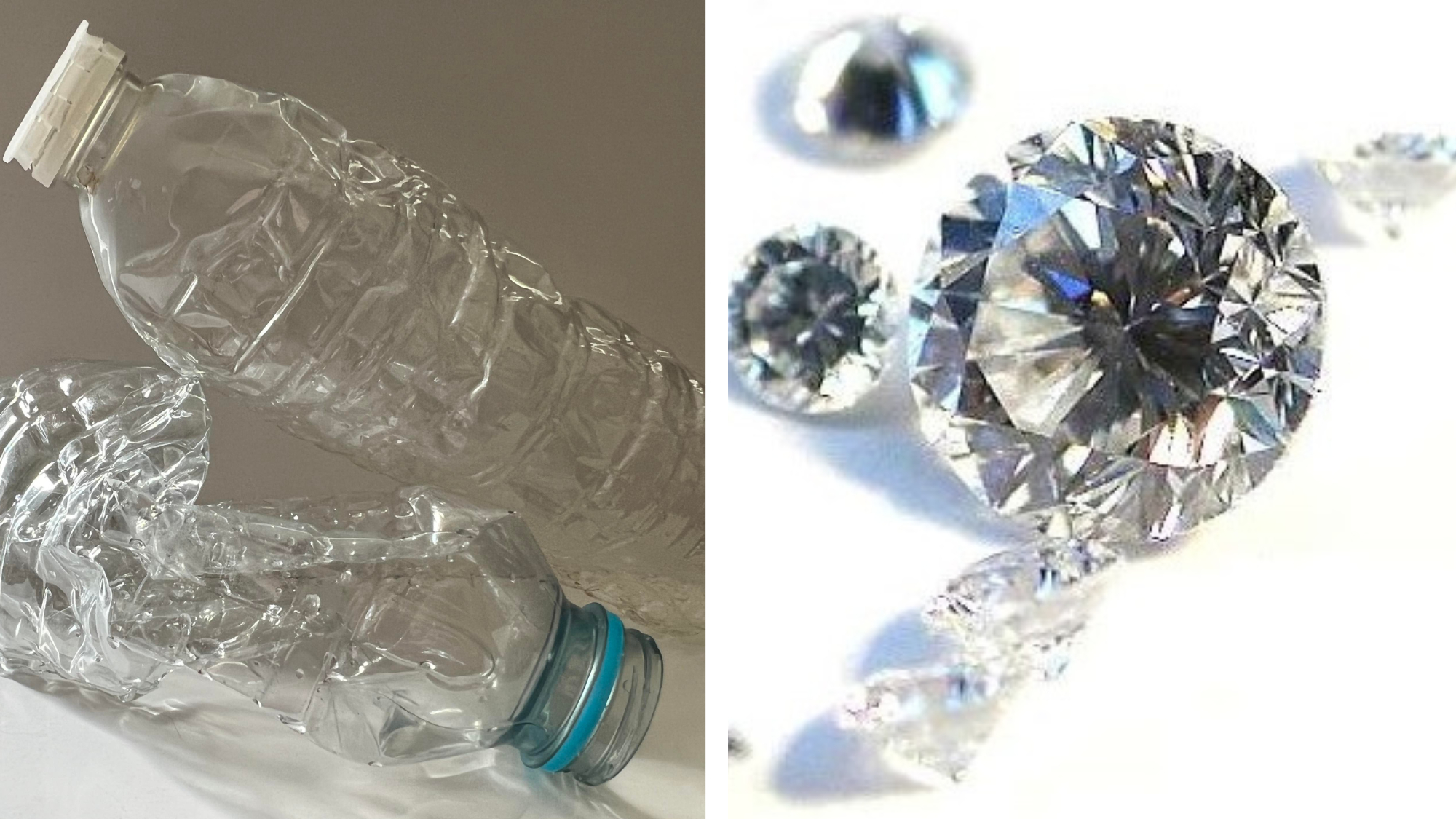