While education-focused groups haven’t stuck out as either candidate’s biggest donors, both candidates have received some substantial donations from those who exert influence on New York’s education world — helping to paint a clearer picture of who is hoping to have sway over schools policy.

Hochul has touted boosting funding for public schools while in office and has earned the endorsements of powerful teachers unions. She recently revealed that she supported lifting the cap on how many charter schools can open in New York.

Hochul’s campaign has garnered contributions from some of the biggest players, such as educator unions, while Zeldin has gained the support of some of the nation’s wealthiest businessmen.

Here are some highlights of who’s contributed to both campaigns as voters head to the polls Tuesday:

The city teachers union has also “engaged our own membership in this election through a combination of digital ads, mailers, emails, texts, robo and live calls in support of the Hochul-Delgado ticket,” said spokesperson Alison Gendar.

The union has praised Hochul for boosting funding for schools and signing a bill that aims to reduce class sizes in New York City public schools. Michael Mulgrew, president of the city teachers union, called Hochul “the best advocate for New York City students and educators in a generation,” when Hochul visited the union’s delegate assembly last month.

Before endorsing Hochul, the state teachers union hadn’t thrown its support behind a  gubernatorial candidate since 2006, said spokesperson Matt Hamilton. The union often had an adversarial relationship with former Gov. Andrew Cuomo, especially over school funding and how state tests factored into teacher evaluations.

In endorsing Hochul in January, the union’s president, Andy Pallotta, said in a statement that Hochul’s “commitment to listening to the needs of our members” is the sign of a “new day” in the state’s capitol.

Hochul’s contributions show she also has some support in the charter sector. New Yorkers for Putting Students First, the political action committee for pro-charter, education reform advocacy organization StudentsFirst NY, gave Hochul $40,000 in September 2021. The committee also donated to Hochul when she was lieutenant governor.

She also received $30,000 this year from the Great Public Schools Political Action Committee, which was created by Eva Moskowitz, who founded New York’s largest charter network, Success Academy. That committee had previously also supported Cuomo. A representative for Success Academy declined to comment on the donation. Eric Grannis, Moskowitz’ husband who was previously listed as the committee’s main contact, did not immediately respond for comment.

That donation came far before Hochul revealed in a recent debate with Zeldin that she, like Zeldin, supports lifting New York’s cap on how many charter schools can open.

While it doesn’t appear that any major education organizations have donated to Zeldin’s campaign, he’s received large sums from Dan Loeb and Ronald Lauder, two billionaires who have gained attention for their views on education policy.

Loeb, who is the CEO of a New York City-based asset management firm called Third Point LLC, donated the maximum $47,100 allowed in general elections to Zeldin’s campaign last month. In the education world, Loeb sits on the board of trustees for Success Academy and was previously the network’s chairperson. CNBC reported in the spring that Loeb, who had contributed $1 million to a political action committee that supported Mayor Eric Adams during the mayoral campaign last year, had been advocating for charter schools in private discussions with Adams.

On Third Point’s website, Loeb’s profile notes that he’s been “an advocate for reforming America’s schools to ensure all children have access to high quality education.” He donated roughly $250,000 over the summer to New Yorkers for a Balanced Albany, a political action committee with ties to Students First New York.

Zeldin first announced his campaign’s education agenda in front of a Success Academy campus in Queens. He said he supports lifting the charter cap and more generally supports school choice, including establishing “tax credits for school choice” and creating education savings accounts, which families can use to withdraw their children from public schools and receive tax dollars to pay for private school or other educational options like therapy.

Representatives for Third Point declined to comment on why Loeb is supporting Zeldin.

Lauder, who donated nearly $61,000 to Zeldin’s campaign, gained attention in 2019 for bankrolling a lobbying effort to preserve the Specialized High Schools Admission Test, which is the single exam students take to gain entry to eight of New York City’s nine specialized high schools.

Lauder has exerted significant influence over the governor’s race this year, spending $11 million so far on getting Zeldin elected, the New York Times reported on Sunday.

3 ways science is on the line

Wed Nov 9 , 2022
People walk into an early-voting location for the US mid-term elections in Stafford, Virginia.Credit: Samuel Corum/Getty US voters head to the polls tomorrow to choose their representatives for Congress, and the results could have consequences for the science agenda laid out by President Joe Biden and his Democratic party. With […] 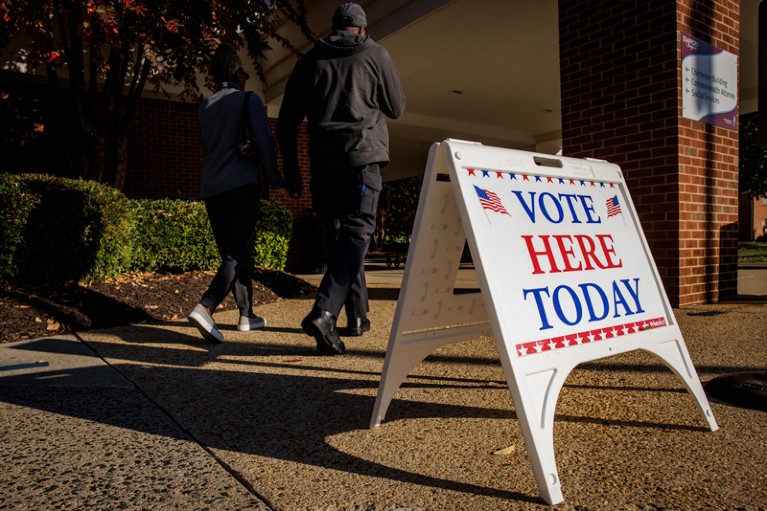