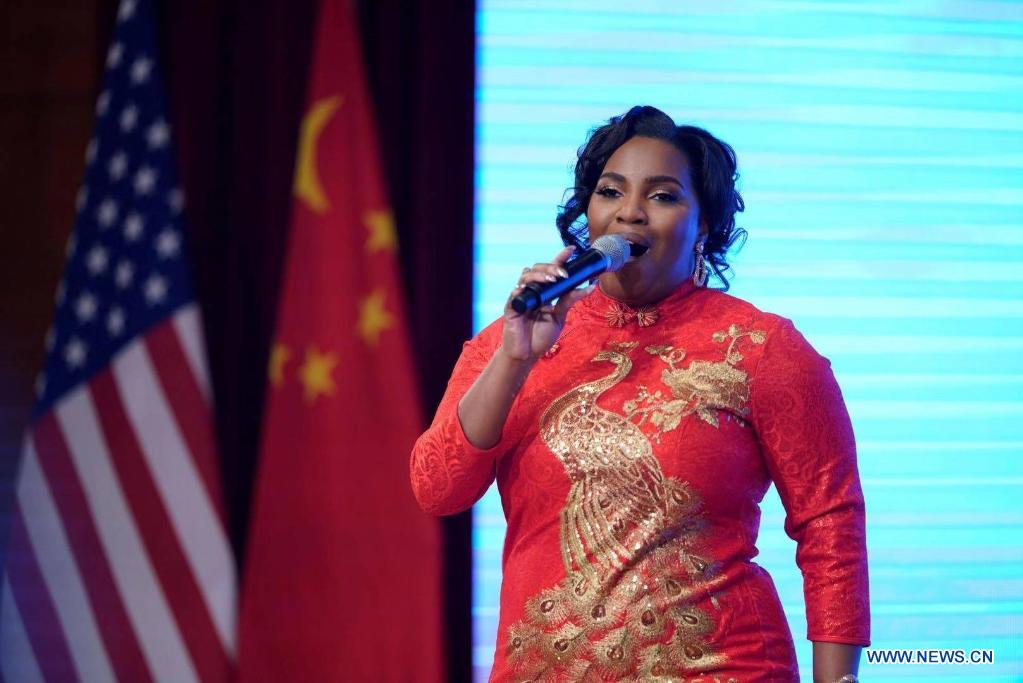 Mary Millben performs during the celebration of the 40th Anniversary of U.S.-China Student Exchanges in Washington D.C., the United States, Nov. 21, 2019. (Xinhua)

On that day, the prominent American and Hollywood actress and singer became the first artist to sing both the U.S. national anthem along with the Chinese national anthem marking the 40th Anniversary of U.S.-China Student Exchanges at the Embassy of the People’s Republic of China in the United States.

“I was the first African-American to sing both anthems and certainly the Chinese Anthem in Chinese,” Millben told Xinhua recently, recalling the beautiful moments she had at the event hosted by the Chinese Embassy in coordination with the U.S. Department of State Bureau of Educational and Cultural Affairs.

“It brought me back to my participation and life as an exchange student in China,” said Millben, who have visited and studied in China as a part of the University of Oklahoma Journey (OU) to China 2006 summer program.

The six-week program was Millben’s first visit abroad, and it took the midwestern girl, who had no idea about how large the Chinese community was in Oklahoma, to China’s four universities in four major cities — Xi’an International Studies University, Yunnan University (Kunming), Peking University (Beijing), and Fudan University (Shanghai).

“It was a life-changing experience,” she said.

WHAT CHINA IMPRESSES ME

“I literally chose the furthest place from Oklahoma, and that actually happened to be China… that’s the truth. That’s actually how it first started,” chuckled Millben, who studied opera in OU.

Millben said she felt very much indebted to then OU President, David Lyle Boren, also veteran politician in the state of Oklahoma, who knew the value that China played in the context of diplomatic relations with the United States and brought the journey to China program to the university.

“I didn’t know much at all about China. What really intrigued me was the opportunity to be really thrown into a culture over weeks or a period of time, and to learn the culture, the history and its people,” Millben, who was joined by a make-up of 17 OU students from different majors, races and backgrounds during the 2006 China trip.

“I was so excited for this assimilation into a different part of the world,” said Millben.

The first morning she woke up around 6 am in Xi’an International Studies University hearing “all of this noise” outside her dormitory. “I’m not exaggerating, but there were hundreds of students on the field track which was right outside my window practicing their English.”

“I was so amazed. That continued by the way over the entire course of our time there, seeing the diligence of the students, practicing their English, I was very impressed.”

Millben said she didn’t have much of a cultural shock in China. “The heritage and the longevity of the Chinese culture was incredibly fascinating.”

“Probably one of the most memorable times was climbing the Great Wall of China. It was an incredible and exhausting experience,” she said. “The beauty of the landscape of China at that height, it was such a joy.”

During her stop in Lijiang, Yunan, Millben got a rare opportunity to meet virtuoso Xuan Ke, now 91, head of Dayan Naxi Orchestra, whose musicians play centuries-old instruments without music sheets.

“It was really sitting at that moment witnessing a piece of Chinese history in real time,” she said.

“The one consistency between all was the warmth that I felt from the Chinese people, and the value of the country’s rich history,” she emphasized.

In recent years, Millben has dedicated her platform as an artist to finding ways in strengthening ties with countries.

She performed the song “Let There Be Peace On Earth” for the 2021 Chinese New Year celebration hosted by Chinese Embassy during the pandemic.

“The greatest way to develop friendship is to get to know each other … Culture is a great reminder of our commonalities,” she said, adding “it reminds us that we are one family.”

She suggested “the best way to do that is to encourage that type of learning early in one’s life.”

“It’s why student exchanges, getting students to study abroad in high school and in college is so important to professional development,” she said. “It was certainly for me, how studying abroad in China really impacted the way that I feel about China and the Asian American community today.”

In any culture, the younger generations are “much more open, accepting and tolerant, of less prejudice,” Millben said.

“I think that’s a beautiful trait among younger generations that we can all learn from. We have to find ways in the context of older generations to take on the heart of a child, a young person and lean into inclusiveness, lean into those commonalities that we all share as a human race, as a global family,” she said.

Actually, Millben was “on a very fast track” in pursuit of a career in American politics as in 2005 she worked as a summer White House intern for President George W. Bush and as a White House presidential appointee for President Bush from September 2006 to January 2009.

Calling herself “a small-town girl from the midwest,” Millben said her experience encourages people to “dream big and know everything and anything is possible.”

“My journey started with very humble beginnings. Success is not a destination. But success is a journey that’s filled with many commas, I would say. So, try to enjoy the journey along the way, and define success by those beautiful moments,” she said.

Whatever the future has in store, Millben said she hopes to continue to be “a voice of hope.”

“I hope my future continues to include opportunities to help unify the world, and unify our souls,” she said. “I can definitely say what I hope in the near future is to visit China again.”

Millben is optimistic that the strained U.S.-China relationship will be back on the right track.

“I’m very hopeful. The relationship between the two countries is an important relationship to the world. We have to maintain healthy ties for the betterment of the world,” she said.

“I am optimistic. I certainly want to do everything that I can to help strengthen the U.S.-China relationship, because I believe in the power of culture and friendship,” said Millben. Enditem