If you doubt elections have consequences, just look up the bills before the House Education Committee this week.

Only yesterday, actually it was December, the Commission to Study School Funding released its final report after a year’s work studying the current funding system and proposing a major overhaul of how state education aid is determined, although committee members declined to embrace a new method to make the system more equitable.

While some of the commission’s recommendations will come before the Legislature this year, the heart of the group’s final report will not.

Instead, lawmakers Tuesday will hold a public hearing on House Bill 20, the Richard “Dick” Hinch education freedom account program, or the latest version of a school voucher bill that opponents say is the most far-reaching and costly voucher program in the country.

If that is not enough firepower to guarantee passage, Gov. Chris Sununu and Department of Education Commissioner Frank Edelblut both support education vouchers.

Edelblut recently did a financial analysis indicating the cost to state and local property taxpayers to be minimal.

The bill currently does not have a fiscal note as the Legislative Budget Assistant waits for additional information from the Department of Education to be able to calculate the cost.

The state currently has a voucher or scholarship program for low- to moderate-income families funded essentially through business tax credits for companies and interest and dividends tax credits for individuals.

“Our communities are struggling under an inequitable funding system which will culminate in an $89 million cut in state funding next year,” said Christina Pretorius, Policy Director at Reaching Higher NH, a bipartisan organization seeking to improve public education in the state. “However, lawmakers have stated that one of their top priorities this session is to enact the most far-reaching voucher program in the country.”

Unlike the current voucher program, the freedom accounts would be open to nearly all parents with children in traditional public and charter schools, as well as in private schools. It is unclear if it is open to parents who are currently homeschooling their children.

Parents and students would receive between about $4,500 to $8,500 per pupil to spend on tuition to any private, religious or alternative school and on other related educational costs including home schooling, computers, books etc.

A provision of the bill makes it abundantly clear there are no restrictions on the types of schools where the money could be spent.

II.  Education service providers shall be given maximum freedom to provide for the educational needs of EFA students without governmental control.

III.  Nothing in this chapter shall be construed to expand the regulatory authority of the state, its officers, or any school district to impose any additional regulation of education service providers beyond those necessary to enforce the requirements of the EFA program.

IV.  An education service provider that accepts payment from an EFA pursuant to this chapter is not an agent of the state or federal government.

V.  No education service provider shall be required to alter its creed, practices, admissions policy or curriculum in order to accept payments from an EFA.”

In other words, the schools do not have to follow state or federal education regulations, guidelines or standards including special education rules and laws because they would essentially be private or non-governmental organizations or providers.

The bill is similar to one proposed in 2017 that was eventually defeated in the House in 2018 after it was retained for additional work.

In his analysis of this year’s bill, Edelblut claims it will save state taxpayers about $360 million to $390 million over 10 years by lowering public school costs as students leave for other educational alternatives.

He touted the program in light of the pandemic and its effect on children.

“Through this pandemic, we have seen tremendous demand for educational options as families searched for instructional models that met the needs of their children and families,” Edelblut said in a press release on his analysis. “Some of those families were driven based on finding an environment where their children could thrive educationally and others were more focused on the need to get back to work. The EFA education program will provide much more flexibility and create many more options to those families while at the same time providing some relief to taxpayers who also have felt the strain of the pandemic.”

But others see it differently.

“A question that I think our state leaders should ask is, what kind of state do we want 5, 10, 15 years from now? Will this program help to strengthen our state, our economy, and prepare our students — current and future — for life in the 21st century?” Pretorius said. “This proposal, along with the funding crisis, presents a reckoning for our state, that I think we all need to grapple with.”

The education funding study proposed changing the system to fund students instead of institutions the architects of the study told reporters after they released the final report.

The commission’s work would redefine an adequate education and its cost and revamp the state’s education aid distribution system.

The inequities between property-wealthy and property poor communities and how they affect public education is why Claremont and four other property-poor communities successfully sued the state over two decades ago.

So the commission first decided to change how the state determines an adequate education and its costs.

A study done by the commission’s consultants, The American Institutes for Research, used student data to prove students in poorer school districts had lower educational outcomes than students with more opportunities from wealthier districts.

The commission decided to base adequate education on the state’s average student outcomes, using achievement scores, attendance and graduation rates.

The new distribution aid system would provide enough money to property poor school districts to give students the opportunity to achieve the average state outcomes.

The distribution system would be based on the needs of students in a district and the community’s or communities’ characteristics.

The consultants proposed several solutions that all used a statewide property tax paid to the state and redistributed to help poorer school districts.

The statewide property tax has been controversial and donor towns successfully sued the state over its use 20 years ago.

The committee fearing a backlash did not endorse a statewide property tax as the most equitable method to provide an adequate education for the state’s children.

The basics of the study have not been proposed as bills this session, but may be in the future.

However, instead of focusing on adequacy and equitable funding, the focus this session will be on allowing parents and students to attend schools outside the public education system by drawing from the pool of education aid money to pay for “educational freedom.”

The House killed a voucher program three years ago, but this year it appears the skids have been greased for a straight shot to the governor’s desk and his signature.

The public hearing on HB 20 begins at 1:15 p.m. Tuesday before the House Education Committee.

Garry Rayno may be reached at [email protected]

Distant Dome by veteran journalist Garry Rayno explores a broader perspective on the State House and state happenings for InDepthNH.org. Over his three-decade career, Rayno covered the NH State House for the New Hampshire Union Leader and Foster’s Daily Democrat. During his career, his coverage spanned the news spectrum, from local planning, school and select boards, to national issues such as electric industry deregulation and Presidential primaries. Rayno lives with his wife Carolyn in New London.

Tue Feb 2 , 2021
The survey — conducted by Gallup and funded by the Boston-based Barr Foundation — seemed to largely reflect the state’s patchwork of community-based decisions over school reopening, in which most large, urban districts remain remote. Affluent students and white students are more likely to be in “hybrid” arrangements, which mix […] 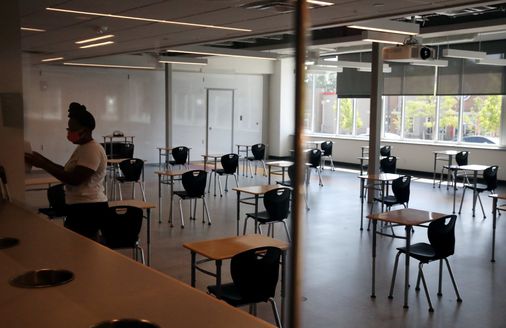