Diverse talent is leaving accounting positions due to a “lack of inclusion,” especially at the senior level, according to a panel of diversity experts in a recent virtual conference hosted by the Institute of Management Accountants.

The session, “Diversity, Equity, and Inclusion in U.S. Finance & Accounting,” acted as a precursor to a report from the California Society of CPAs and the Institute of Management Accountants, “The Role of Diversity, Equity, and Inclusion in Finance and Accounting Transformation,” which will be released mid-February. The report utilizes a nationwide survey of 3.100 current and former accounting professionals to examine diversity trends in the accounting profession more closely.

CalCPA and the IMA found in their research that, on average, 49 percent of respondents from each of the study’s three focus areas — race, gender, and LGBTQIA — left a company due to “a lack of equitable treatment,” with an average of 40 percent leaving due to an overall “lack of inclusion.” 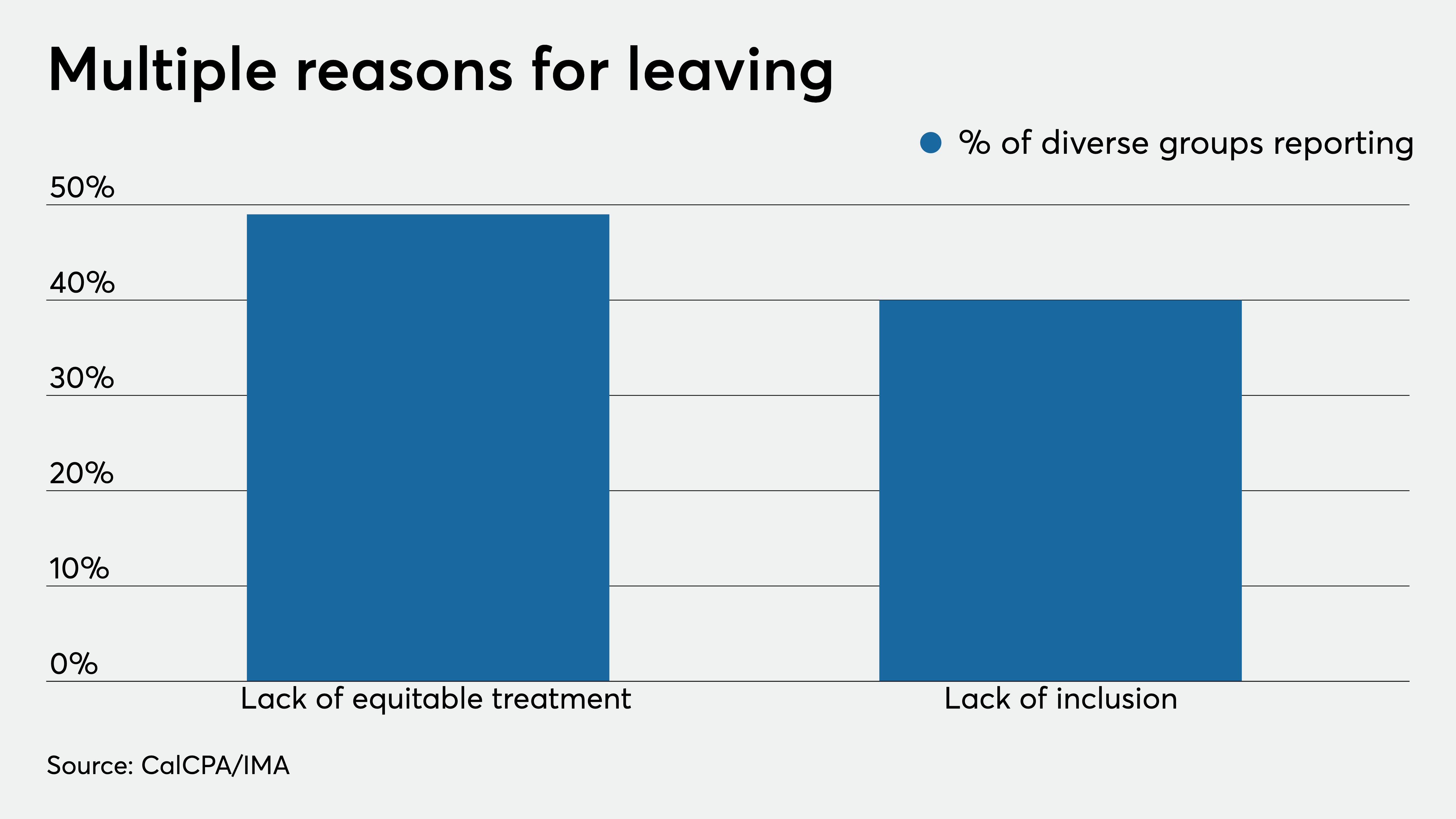 Their research also found that men comprise 77 percent of partners in accounting or finance functions at U.S. CPA firms, with more than 90 percent of the profession’s executive leadership White. This is despite 62 percent of the U.S. accounting profession being female, 9 percent Hispanic/Latino, 8.5 percent Black/African-American, and 12 percent Asian, according to AICPA and U.S. Bureau of Labor statistics.

Moderators for the session included Brad Monterio, chief learning officer and vice president of member competency and learning at CalCPA; Loreal Jiles, director of research — digital technology and finance transformation, liaison to Committee on Academic Relations at IMA; Jeff Thomson, president and CEO of IMA; and Anthony Pugliese, president and CEO of CalCPA.

Touching on the main themes of the to-be-released report, the moderators said that the profession needs to shift its focus from diversity in staff members to diversity in senior positions.

“Inadequate progress has been made in … promoting diverse talent, especially in [firm leadership],” said Thomson. “As accountants, we must have an opportunity to do great things. … What do kids say when they look at the face of our profession? … We have an opportunity to tell our story while making lasting change.”

“Talk has not moved our profession very far,” added Pugliese. “We have to do more. … Following the status quo is what’s preventing us from doing this.”

Jiles said the upcoming report is focused on diversity in three main categories: racial, gender and LGBTQIA. She also noted that while a slight majority of the U.S. accounting work force is female, men still hold “77 percent of accounting firm leadership. … Diverse talent exists in our profession, but it is not rising to the top.”

Experts agreed that while diversity is making headway across the profession, an outside observer wouldn’t be able to tell.

“There’s a way to go … it’s still quite lacking at the top,” said Neighbors. “When you’re bringing underrepresented groups [in], there isn’t that sense of belonging. … Instead of higher walls, we need longer tables.”

“If you’re not in networks, you’re excluded,” added Nash. “A lot of this has to do with, as senior leaders, are we reaching out to people who don’t look like us? … If we don’t do something now, when will we do something?”

For the time being, the panel stressed that mentorship is the biggest factor in bridging the gap between underrepresented minorities in the profession and senior leadership.

“Mentor someone who doesn’t look like you,” said Ramsey. “It will make someone feel more included because they see that you care. That’s something that will keep people in your organization. … You have to be thoughtful on how you bring people in.”

“We have to be careful that we assume that the problem is someone else’s responsibility; the responsibility belongs to all of us,” said Johnson. “I was mentored, and that told me, ‘I can make a difference.’ We need to be agents of change as well; we can’t just leave it to the top.”