The COHERENT particle physics experiment at the Department of Energy’s Oak Ridge National Laboratory has firmly established the existence of a new kind of neutrino interaction. Because neutrinos are electrically neutral and interact only weakly with matter, the quest to observe this interaction drove advances in detector technology and has added new information to theories aiming to explain mysteries of the cosmos.

“The neutrino is thought to be at the heart of many open questions about the nature of the universe,” said Indiana University physics professor Rex Tayloe. He led the installation, operation and data analysis of a cryogenic liquid argon detector for neutrinos at the Spallation Neutron Source, or SNS, a DOE Office of Science User Facility at ORNL.

The study, published in Physical Review Letters, observed that low-energy neutrinos interact with an argon nucleus through the weak nuclear force in a process called coherent elastic neutrino-nucleus scattering, or CEvNS, which is pronounced “sevens.” Like a ping-pong ball bombarding a softball, a neutrino that hits a nucleus transfers only a small amount of energy to the much larger nucleus, which recoils almost imperceptibly in response to the tiny assault.

Laying the groundwork for the discovery made with the argon nucleus was a 2017 study published in Science in which COHERENT collaborators used the world’s smallest neutrino detector to provide the first evidence of the CEvNS process as neutrinos interacted with larger and heavier cesium and iodine nuclei. Their recoils were even tinier, like bowling balls reacting to ping-pong balls.

“The Standard Model of Particle Physics predicts coherent elastic scattering of neutrinos off nuclei,” said Duke University physicist Kate Scholberg, spokesperson and organizer of science and technology goals for COHERENT. The collaboration has 80 participants from 19 institutions and four countries. “Seeing the neutrino interaction with argon, the lightest nucleus for which it has been measured, confirms the earlier observation from heavier nuclei. Measuring the process precisely establishes constraints on alternative theoretical models.”

Yuri Efremenko, a physicist at the University of Tennessee, Knoxville, and ORNL who led development of more sensitive photodetectors, said, “Argon provides a ‘door’ of sorts. The CEvNS process is like a building that we know should exist. The first measurement on cesium and iodine was one door that let us in to explore the building. We’ve now opened this other argon door.” The argon data is consistent with the Standard Model within error bars. However, increased precision enabled by bigger detectors may let scientists see something new. “Seeing something unexpected would be like opening the door and seeing fantastic treasures,” Efremenko added.

“We’re looking for ways to break the Standard Model. We love the Standard Model; it’s been really successful. But there are things it just doesn’t explain,” said physicist Jason Newby, ORNL’s lead for COHERENT. “We suspect that in these small places where the model might break down, answers to big questions about the nature of the universe, antimatter and dark matter, for instance, could lie in wait.”

The COHERENT team uses the world’s brightest pulsed neutron source at SNS to help find the answers. The neutrons SNS produces for research create neutrinos as a byproduct. A service corridor beneath the SNS mercury target has been converted into a dedicated neutrino laboratory, dubbed Neutrino Alley, under the leadership of Newby and Efremenko. A 53-pound, or 24-kilogram, detector called CENNS-10 sits 90 feet, or 27.5 meters, from a low-energy neutrino source that optimizes opportunities to spot interactions that are coherent. This means approaching neutrinos see the weak force of the nucleus as a whole, leading to a bigger effect as compared to non-coherent interactions.

Bigger detectors are better at making high-precision measurements, and the CENNS-10 detector technology is easy to scale up by merely adding more liquid argon.

The CENNS-10 detector was originally built at Fermilab by COHERENT collaborator Jonghee Yoo. He and Tayloe brought it to IU and reworked it there before it was installed at SNS in 2016. Newby and Efremenko had prepared the SNS site with shielding of layered lead, copper and water to eliminate neutron backgrounds.

After initial measurements indicated the experiment would not be dominated by background, wavelength-shifting coatings were applied to the photodetectors and inner reflectors that significantly improved light collection. The detector was calibrated by injecting krypton-83m into the liquid argon to allow calculation of the number of photons present.

The published results used 18 months of data collected from CENNS-10. Analysis of the data revealed 159 CEvNS events, consistent with the Standard Model prediction.

COHERENT’s data will help researchers worldwide interpret their neutrino measurements and test their theories of possible new physics. The calculable fingerprint of neutrino-nucleus interactions predicted by the Standard Model and seen by COHERENT has practical applications, too. “This is a way to measure the distribution of neutrons inside nuclei and the density of neutron stars,” Efremenko said. “It’s a contribution to nuclear physics and astrophysics because the processes are very similar.”

Different types of detectors are necessary for comprehensive neutrino studies. To further the goal of observing CEvNS on a variety of nuclei, a 16-kilogram detector based on germanium nuclei, which are bigger than argon but smaller than cesium and iodine, will be installed in Neutrino Alley next year. An array of sodium iodide detectors has been installed to augment the cesium iodide detector in operation there since 2017.

Meanwhile, data collection continues 24/7 despite COVID-19 because COHERENT collaborators monitor their liquid argon detector remotely. They aspire to enlarge it to ton-scale to see 25 times as many events annually and enable observation of detailed energy spectra that could reveal signatures of the new physics, including the existence of sterile neutrinos that have no weak interaction and, therefore, would not demonstrate a coherent interaction.

Eventually, they would like to add an even bigger 10-ton, liquid-argon detector at SNS’s Second Target Station. “We’re pushing on the technology so that, in the future, we will be able to answer questions that require greater precision,” Newby said.

The title of the Physical Review Letters paper is “First Detection of Coherent Elastic Neutrino-Nucleus Scattering on Argon.”

UT-Battelle manages ORNL for the Department of Energy’s Office of Science, the single largest supporter of basic research in the physical sciences in the United States. The Office of Science is working to address some of the most pressing challenges of our time. For more information, please visit energy.gov/science.

Wed Jan 27 , 2021
PLEASANT VALLEY, Iowa (KWQC) – “There’s something special about a snow day too that there’s excitement around it,” Pleasant Valley Superintendent Brian Strusz said. Many students across the day were given the day off Tuesday as some areas in the QCA saw over eight inches of snow following a wintery […] 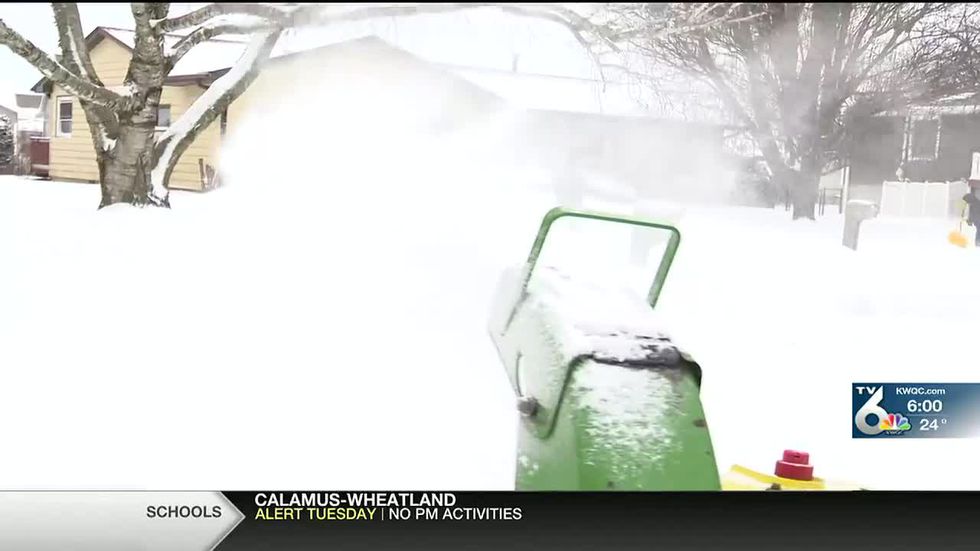