He was named Connecticut’s top schools official last year and, if confirmed for the national job, will have achieved a meteoric rise, moving from assistant superintendent in his hometown of Meriden, Conn., a district with 9,000 students, to secretary of education in less than two years.

He was born in Meriden to Puerto Rican parents who lived in public housing and has a personal story the Biden team found compelling. He was the first in his family to attend college and was raised in a Spanish-speaking home. He began his career as a fourth-grade teacher and rocketed up the ranks, becoming the state’s youngest principal at age 28. He was named the state’s principal of the year in 2012.

His two elementary-school-age daughters are public school students in Meriden, a midsize city near Hartford.

Cardona’s experience in public education offers a sharp contrast to President Trump’s education secretary, Betsy DeVos, who attended private schools and spent much of her energy advocating for alternatives to public education. And though Cardona has lived in poverty, DeVos is a billionaire who has been wealthy all her life.

In a statement, Biden praised Cardona’s background as a public school teacher and leader and said he will help ensure that students are equipped to thrive, teachers have what they need and schools are on track to reopen safely. “In Miguel Cardona, America will have an experienced and dedicated public school teacher leading the way at the Department of Education,” Biden said.

The announcement was welcomed by congressional Democrats. There was scant response from Republicans, but a Senate GOP aide predicted Cardona would be confirmed.

In Connecticut, Cardona has worked to reopen schools closed by the pandemic, an important factor in his favor, one person familiar with the decision said. In Connecticut, just over 70 percent of school districts have offered in-person options this fall, a state official said.

The new education secretary’s first task will be to help guide schools through the final phase of the pandemic. Biden has called on districts to resume in-person teaching within his first 100 days in office.

After schools closed, Cardona also worked to procure electronic devices for students who needed them for remote learning. Biden also prized that work, as well as Cardona’s focus on how the pandemic is widening the equity gaps in education, said a person familiar with the decision who, like others, spoke on the condition of anonymity because they were not authorized to comment publicly.

Cardona has repeatedly stated the need for in-person schooling in equity terms. Providing in-person learning will help “level the educational playing field and reduce gaps in opportunities for our students,” Cardona wrote in an open letter to teachers last week. “If we can do it safely, this is what we owe to them.”

In the letter, he also thanked teachers for their “extraordinary and heightened sense of service.”

While teachers unions across the country have resisted a return to buildings, union officials in Connecticut said Cardona was always willing to listen to their point of view and worked to reopen school buildings safely.

“Even if we disagreed, everyone had a chance to express their feelings and beliefs,” said Jan Hochadel, president of the American Federation of Teachers Connecticut.

She said she had a positive experience working with Cardona earlier in his career on a panel examining teacher evaluations, where she said he promoted evaluations as a way to coach teachers toward improvement, rather than as a form of punishment.

He was described in similar terms by Amy Dowell, the Connecticut state director of Democrats for Education Reform, a group that often clashes with teachers unions. “He has been a real partner,” she said. “Even when he doesn’t agree, he’s been a good listener and takes in a lot of perspectives in his decision-making.”

During Cardona’s tenure, Connecticut became the first state to require high schools to offer courses in Black and Latino studies. Earlier, he was co-chairman of a state task force studying achievement gaps. His doctoral dissertation was titled “Sharpening the Focus of Political Will to Address Achievement Disparities.”

As a candidate, Biden promised to choose a public school educator as secretary, and his search focused on people with K-12 experience. He also sought out a person of color for the post, considering several other Latino and Black school leaders as he worked to diversify his Cabinet.

And while the president-elect has been criticized for choosing a number of Obama administration veterans for top jobs, Cardona is an entirely fresh face, albeit one that a transition official acknowledged was “a little green for the job.”

Biden frequently invokes his wife, Jill, who is a community college professor, as he explains why education is important to him and his agenda. She was more involved in the education secretary nomination that she has been in others, and she participated in an interview with Cardona.

The trickiest part of the selection process was navigating competing education wings inside the Democratic Party. Biden and his team considered more than a ­dozen candidates, and all were aligned with one side or the other in the divisive debate over improving American schools, two people familiar with the process said.

Democrats who support ­accountability-driven reforms, such as student testing, teacher evaluations and charter schools, touted several big-city superintendents for the secretary job. Teachers unions rallied behind two union leaders who were under consideration, particularly Lily Eskelsen García, who recently stepped down as president of the National Education Association, although Randi Weingarten, the president of the American Federation of Teachers, was more seriously considered.

But in the end, Biden did not want to choose a candidate from either camp, and Cardona won praise Tuesday from a wide range of education groups, some of which were relieved that even if their favorite candidate was not selected, at least the nominee was not firmly in the opposing camp.

In the end, the decision came down to two people after the process was well underway, both suggested by Linda Darling-
Hammond, who headed the education transition team. In addition to Cardona, she suggested Leslie Fenwick, a former dean of the Howard University School of Education, three people familiar with the process said.

Fenwick is a fierce critic of centrist education reforms that gained traction under President Barack Obama and has said as much in blunt and controversial ways. She argued that reform ideas are “schemes” driven by racism and that urban reforms are really about land development. Those views helped kill her candidacy, with Biden’s team fearing she would be too controversial.

Meanwhile, Democrats on the other side of the debate mobilized behind Cardona. The Congressional Hispanic Caucus also endorsed him last week.

In the end, Cardona was a safer selection, having toiled more as an education practitioner than a policymaker during the height of the education wars.

Cardona has described himself as “a goofy little Puerto Rican” born in the Yale Acres public housing complex, according to the Hartford Business Journal. The paper reported that Cardona was blunt when asked about how the state educates students learning English. “Not good enough. Not good enough,” he said. “We have to focus on that more.”

“Education is the great equalizer: It was for me,” Cardona told legislators considering his nomination for the top state education post. “Our success as a state will be dependent upon how we support students who are learning English as a second language.”

As a candidate, Biden promised to address the shortfalls of U.S. education primarily through increased funding, a sharp departure from Trump, who repeatedly proposed deep cuts to the federal education budget and billions of dollars in tax credits to subsidize tuition at private schools.

Biden proposed tripling the $15 billion Title I funds that support high-poverty schools and said he would double the number of psychologists, counselors, nurses and social workers in schools, provide new money for school infrastructure and dramatically increase federal spending for special education.

Next year, his Education Department will have to decide whether to waive a requirement that states test students in the spring. DeVos waived it last year because of the pandemic. Cardona has said he favors the assessments to see where students are academically after a year of disrupted education.

He brings little experience on higher education, though that area represents a large share of the Education Department’s work. Some of Biden’s biggest education promises involve college, including proposals to forgive college debt and make community college free.

Cardona also won praise from Ted Mitchell, the president of the American Council on Education, which represents college and university leaders. He said Cardona has been supportive of state funding for higher education, seeing college as the natural extension of a K-12 education.

“I’ve been a fan, a big fan,” Mitchell said. “He has been very articulate in talking about access and opportunity for low-income students, and whether that’s K-12 or higher education, and that’s exactly the right place to start.”

Rep. Swalwell should be dropped from Intel Committee because of spy scandal: Rep. Riggleman

Wed Dec 23 , 2020
A member of Congress with no suspicions about socializing with a Chinese national has no place on the House Intelligence Committee, according to outgoing Rep. Denver Riggleman, R-Va., a former intelligence officer. Rep. Eric Swalwell, D-Calif., showed a ‘ridiculous, stupid’ lapse in judgment when he networked with a suspected Chinese spy […] 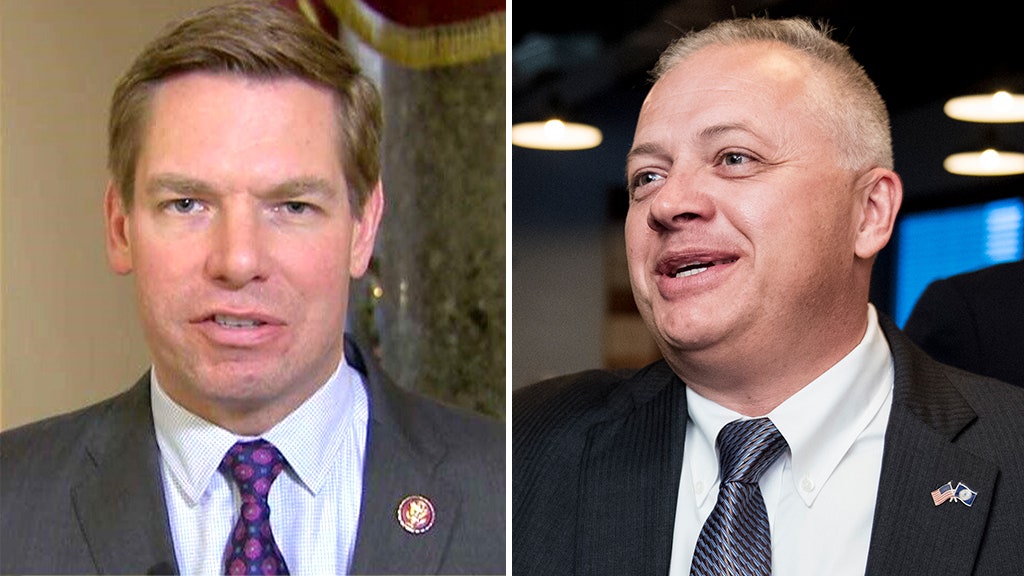