Her most lasting legacy may be a sweeping directive governing how schools handle allegations of sexual assault and harassment. Those rules, which give more due-process rights to the accused, will be difficult to unwind, though President-elect Joe Biden has said he will try.

She also used executive authority to roll back Obama-era guidance on affirmative action, and to require college campuses to recognize free speech rights.

Other DeVos priorities required congressional action, and she was able to move almost none of them through Congress.

“If you want to make lasting changes in public policy, you need to enact laws,” said Terry Hartle, senior vice president for government relations with the American Council on Education, which represents colleges and universities. “If you’re going to live by executive-branch action, you die by executive action. That’s the world we live in.”

DeVos was a stalwart ally to Trump, even as White House aides whispered that the president did not think much of her. She rarely said anything that could be read as criticism of Trump until Thursday, when she resigned with 13 days remaining, to protest his role in igniting a mob that breached the U.S. Capitol.

“There is no mistaking the impact your rhetoric had on the situation, and it is the inflection point for me,” she wrote in her resignation letter to Trump.

Her last day was Friday. “It has been a privilege to serve America’s students alongside you,” she wrote in a brief goodbye note to Education Department staff Friday morning.

Her final chapter was a consequential one, as the coronavirus pandemic shut down U.S. schools. DeVos joined Trump in pushing schools to reopen for in-person learning, with mixed success. Some experts agreed with her, fearing remote learning is leaving many children behind. Critics noted that the federal government failed to provide schools with clear guidance or funding that would have made it easier to open doors.

Before and during the pandemic, DeVos trained her focus on school choice policies, which allocates taxpayer money to families who choose alternatives to traditional public schools. For DeVos, that includes private schools, religious schools, parent-organized “pods,” home schooling and charter schools of all sorts.

She branded it “education freedom” and suggested federal dollars to support traditional schools had been wasted. When the pandemic hit, DeVos saw the failure of some schools to open doors as evidence that parents needed taxpayer-supported alternatives.

In an interview last month with Frederick Hess, director of education policy studies at the conservative American Enterprise Institute, she was asked what her most significant accomplishment was. “Hands down, it’s changing the national conversation around what K-12 education can and should be,” she replied.

Her work was welcomed by conservatives who argue that power over education belongs with parents, not systems.

“Not beholden to the education establishment and teachers unions, Betsy was clear from the beginning that she was the secretary of education, not just traditional public education,” said Kay C. James, president of the Heritage Foundation, a conservative think tank that DeVos and her husband have supported through their family foundation.

Her supporters note that several states have expanded school choice programs and say DeVos’s advocacy made a difference in the public debate. But the issue went almost nowhere in Washington.

“She’ll be remembered as an unapologetic voice for expanded school choice, and I think after racking up no legislative victories over the past four years, it’s hard to see a lot of concrete impact of that,” Hess said in an interview.

Her signature proposal would have created a type of federal school voucher program, where donations to state scholarship programs would be reimbursed in the form of federal tax credits. It garnered GOP support in Congress but was opposed by Democrats, who control the House, and some Republicans.

DeVos has said she regrets not pushing the issue harder earlier in Trump’s term, when Republicans controlled both the House and the Senate. Her best chance was probably in a sweeping tax bill, signed in 2017, but the White House did not even include school choice proposals in its blueprint for the bill.

She also tried to funnel additional dollars from a pandemic relief bill to private schools. That effort was blocked by a federal judge, and even some Republicans called it misguided.

DeVos believed the federal government should have a light touch when it comes to education, and she shrunk the size of the Education Department workforce by 11 percent, as of June, declining to fill positions. She seemed more comfortable leaning down to talk with children on school visits than interacting with official Washington.

The White House proposed annual budgets slashing the Education Department’s funding, and DeVos defended them on Capitol Hill, although Congress — even when controlled by Republicans — rejected the cuts.

The result was an annual drubbing of DeVos by congressional committees in service of proposed cuts that were never going to happen anyway. That was never more painful than last year, when DeVos absorbed three days of hits over a proposal to cut funding for the Special Olympics that the White House had insisted upon, only to watch as Trump dramatically announced that he was restoring the funding.

Her tenure also will be known for rolling back Obama-era civil rights protections, including those aimed at protecting transgender students and eliminating racial disparities in school discipline rates. Under DeVos, the Education Department’s Office for Civil Rights jettisoned most systemic investigations, focusing instead on clearing a significant backlog of cases.

Critics said she failed to protect students’ civil rights. “Speed is not the measure of whether justice is served,” said Liz King, senior director of the education equity program at the Leadership Conference on Civil and Human Rights. “Secretary DeVos’s primary legacy is an agenda of discrimination and exclusion.”

In higher education, her most consequential work involved regulating how colleges and other schools investigate sexual harassment and assault under the federal civil rights law known as Title IX. Earlier in her term, DeVos rescinded less-formal guidance issued by the Obama administration. The new regulation, published last year, carries the force of law.

It creates a clear but controversial road map to navigating these highly charged investigations, including mandating a judicial-like process in which the accused has the right to a live hearing and to cross-examine accusers. Supporters say it provided much-needed due-process protections. Opponents argued it would allow assailants and schools to escape responsibility and discourage victims from coming forward.

Unraveling it would require legislation or another complex rulemaking process.

“This is an extraordinarily big, complicated task,” said Hartle, of the American Council on Education, which opposed the rule. He expects the Biden administration to roll it back, but said it will not be quick or easy, partly because the regulation is complex with many different elements. “You can’t do this by fiat. You have to go through a regulatory process.”

DeVos quickly proved herself an ally of for-profit colleges by withdrawing, delaying or announcing plans to revamp more than a half-dozen Obama-era measures that affected the industry, all within her first year. The secretary tapped former for-profit college executives to marshal higher-education policies that critics say gave predatory schools a pass.

“DeVos hired for her team a group of former for-profit college executives, and they worked to dismantle all the protections, block debt relief for ripped-off students, and ensure that federal dollars kept flowing to the worst colleges,” said David Halperin, an attorney who has been critical of the for-profit industry.

DeVos was also a fierce critic of the Obama administration’s consumer regulations, accusing her predecessor of putting taxpayers at risk with policies that made it too easy for college students to shirk their financial responsibilities. She once complained that “all one had to do was raise his or her hands to be entitled to so-called free money.”

In her first year in office, she delayed an Obama-era regulation that granted loan forgiveness to borrowers who had been defrauded by their colleges, known as borrower defense to repayment. Her move was challenged in court and in Congress, but took effect in July. It limits the time borrowers have to apply for relief and requires they prove financial harm.

“Her legacy is clearly one of disdain for the public good in higher education, students’ rights and lawful proceedings of government,” said Toby Merrill, director at the Project on Predatory Student Lending, a legal-aid group.

DeVos was also sued by former Corinthian Colleges students angry that their debts had not been fully forgiven. DeVos refused to change course, and was held in contempt by a federal judge for violating an order to stop collecting loan payments.

It took nearly four years for DeVos to dismantle Obama-era consumer protection rules. The Biden administration could restore many of those policies in much less time, but some will be easier than others to revive.

Restoring the 2016 borrower defense rule would require negotiated rulemaking at the Education Department, a process that could take months, if not longer. The same is true for restoring the gainful-employment regulation, which penalizes career-training programs for producing too many graduates with more debt than they can repay.

In the meantime, a Biden administration could clear out the backlog of borrower defense claims using a more generous methodology for approval and loan forgiveness.

Sun Jan 10 , 2021
As policy experts and lobbyists bring their ideas for education reform to Austin this session, we thought lawmakers should hear directly from students themselves. We invited students at Uplift Education to write letters about their experiences at a charter school and what makes the program a success. They believe in […] 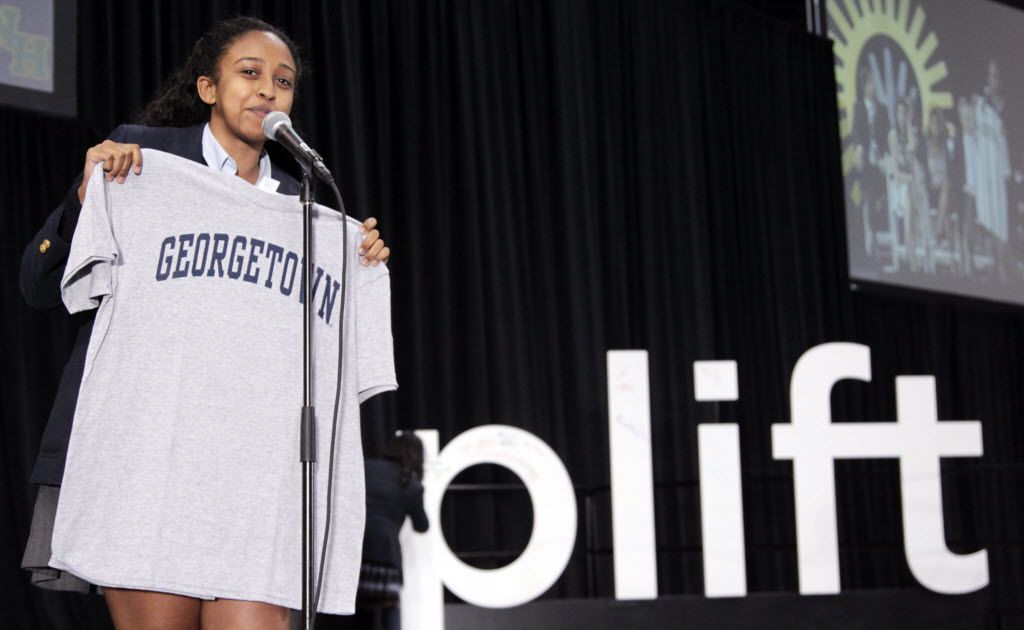