Rep. Alexandria Ocasio-Cortez on Friday said Amazon’s jobs are a “scam” because they’re not creating financial security for workers.

“A ‘job’ that leaves you homeless & on food stamps isn’t a job. It’s a scam,” she said on Twitter.

Ocasio-Cortez referenced a Bloomberg News report detailing how many Amazon warehouse workers struggle to pay bills, with as many as 4,000 on food stamps.

The report said Amazon has turned logistics work from a professional career option to “entry-level” work for many. As Amazon’s workforce has soared during the pandemic, safety conditions in its warehouses have failed to keep pace, according to the report.

“This is why ‘Amazon jobs’ aren’t it & we should instead focus our public investments + incentives on small businesses, public infrastructure, & worker cooperatives that actually support dignified life,” said Ocasio-Cortez on Twitter.

In an emailed statement, Amazon said the reporting referenced by Ocasio-Cortez’s comments was “false,” adding that “it violates over 50 years of economic thought, and suspends the law of supply and demand.”

Said a spokesperson: “Hiring more, by paying less, simply does not work. Many of our employees join Amazon from other jobs in retail which tend to be predominantly part-time, reduced benefit jobs with it substantially less than our $15 minimum wage. These employees see a big increase in pay per hour, total take home pay, and overall benefits versus their previous jobs. What surprises us is that we are the focus of a story like this when some of the country’s largest employers, including the largest retailer, have yet to join us in raising the minimum wage to $15.”

Amazon said its facilities create jobs, sometimes breathing new life into cities – many of which lost their economic stability as manufacturing jobs moved elsewhere. Wages generally rise in communities where it opens warehouses, it said. And it invested $90 billion in infrastructure and compensation in 2019.

The daily lives of the workforce in Amazon’s warehouses has long been a point of interest on Capitol Hill. Earlier this month, a group of lawmakers led by Sen. Elizabeth Warren called for greater transparency into injuries in warehouses.

“We are now at the beginning of another dangerous season for Amazon warehouse workers, and the company’s responses to repeated Congressional inquiries have only escalated our concern about Amazon’s unwillingness to value worker safety above corporate profit,” the group said in a joint statement.

The US National Labor Relations Board this week said it had found merit in the claims that Gerald Bryson, who worked at Amazon’s Staten Island fulfillment center, was fired in retaliation for protesting health and safety policies in the warehouse.

Ocasio-Cortez has taken aim at Amazon repeatedly, often calling into question the amount of corporate tax it pays. Taxes from corporations could help pay for schools, hospitals, and other public infrastructure, she has often said.

In 2019, she called into question why Amazon paid zero in federal income taxes on more than $11 billion in profit.

“Why should corporations that contribute nothing to the pot be in a position to take billions from the public?” she said at the time on Twitter.

As Biden eyes Cardona for education secretary, focus is on how he handled school reopening 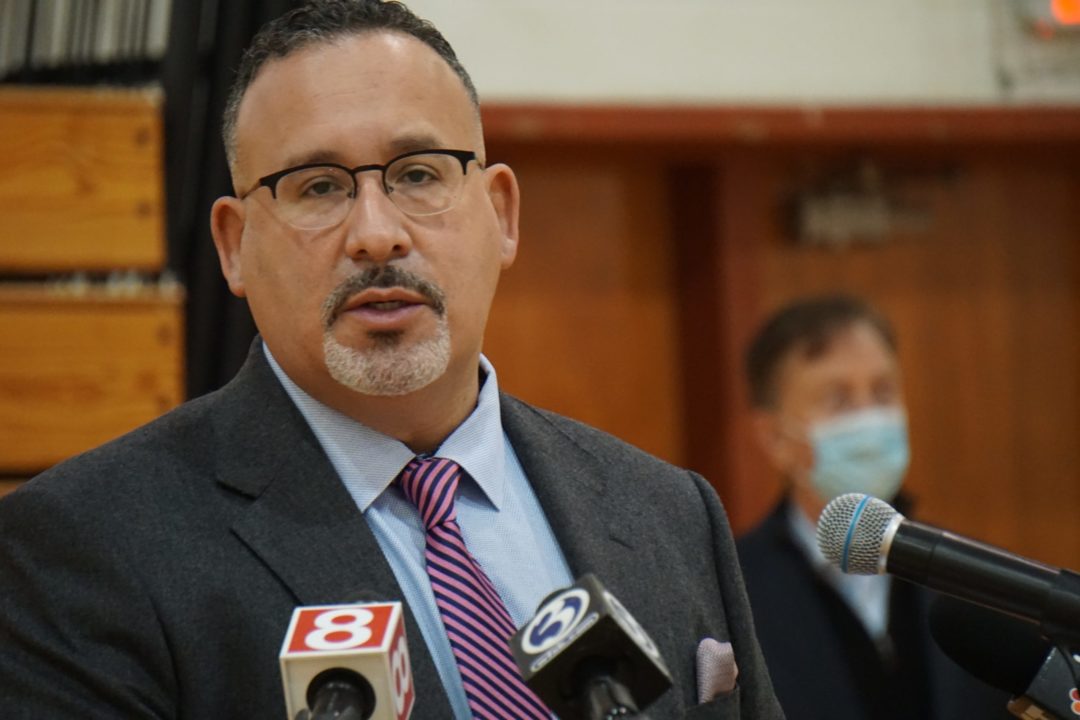