Some families decided to homeschool their children due to the COVID-19 pandemic.

Now they plan to enroll — or reenroll — them in local schools for the 2021-22 school year.

Before the start of this school year, less was known about COVID-19, vaccines weren’t yet available, and there was an expectation that students may move between in-person, hybrid and virtual instruction throughout the year, which became a reality for many. After considering those factors, some families decided to homeschool indefinitely, but now plan to send their children back to school in person in the fall.

Sara McElroy said she and her husband, Clint, never envisioned themselves homeschooling their children, Ruby, a kindergartner, and Eleanor, a third grader, while both working full time.

“That was definitely not part of the plan,” McElroy said. “So I don’t know what our expectations really were last year other than we both agreed that we were going to do the best we could, and we thought we were capable and we were going to give it a go.”

Clint McElroy is a computer programmer at Indiana University and Sara McElroy is an office manager for a mental health center and they’ve been able to work from home. They made the decision to homeschool last summer so they could prepare their children ahead of time rather than waiting anxiously to know what their school district would plan.

Unless there is a big change with the circulating COVID-19 variants, the McElroys intend to send their kids back to school in person in the Richland-Bean Blossom Community School Corp. It’s a decision the family is comfortable with now that more is known about preventing transmission and vaccinations are available to Hoosiers age 16 and older.

In Indiana, if a child leaves public school to be home-schooled, parents must notify the school, but home schools don’t have to register with the Indiana Department of Education. That makes it difficult to know how many families in the state made the switch to homeschooling. Indiana is one of 11 states that doesn’t require parents to provide notice of home schooling to state or local officials, according to the Coalition for Responsible Home Education, a nonprofit organization that advocates for accountability and the interests of home-schooled children.

In August 2020, Rachel Coleman, co-founder, executive director and director of research for the CRHE, told The Herald-Times since the COVID-19 pandemic, the amount of people contacting CRHE was up more than tenfold.

Lisa and Chris Land choose to homeschool kindergartner Oliver and second grader Samuel so their children wouldn’t have to switch back and forth between instructional models throughout the year. The Lands own a construction company, and while Chris Land went back to work in person once he was able, Lisa stayed home with their children.

“I’m not saying they didn’t cause some more gray hairs this year, but overall, it’s been good,” Lisa Land said. “I’ve loved having the extra time to spend with them. They’ve learned things and we’ve gone on lots of hikes and done all sorts of adventurous things and just had a good time as a family.”

But, Lisa Land said, she and her husband both had great elementary school experiences and they’re excited for their children to get that same opportunity in the Monroe County Community School Corp., especially for their youngest, Oliver, who hasn’t gone to school yet since he was homeschooled for kindergarten.

“It doesn’t feel as much like we’re in an unknown right now,” she said. “So it seems like we can with confidence say OK, you guys are going to school on Aug. 4.”

Brianna Alexander also didn’t like the idea of not knowing what her children’s schedule would look like for the year and having instructional models go back and forth. Her husband works for the City of Bloomington, but she lost her job in March 2020. She felt it would be safer to spend the year homeschooling her preschooler, Julian, kindergartner Marlena and second grader Leo because of COVID-19.

“Because we had the ability to keep them home, I thought it was important to free up as much room in the classroom for students that needed to attend in person to have as much distance between each other as possible,” Alexander said.

She initially assumed homeschooling would just be for the first semester, but as time went on, she decided to continue homeschooling for the entire school year. Now Alexander feels good about sending her children back to school in person in the MCCSC next year, mainly because of vaccine availability. She’s also pregnant and due in August, so the thought of homeschooling with a newborn also made her nervous.

Home-schooled students in Indiana must receive “instruction equivalent to that given in public schools,” according to Indiana education code, but what is considered to be equivalent instruction isn’t defined. In Indiana, home schooling is not its own category, but falls under non-accredited nonpublic schools. State law doesn’t require testing of any kind for children being home-schooled.

Alexander used the homeschool curriculum “The Good and the Beautiful” with her children and said she was impressed with how many resources and online groups are out there for homeschooling families.

Families also acknowledge this year of pandemic homeschooling has been a lot more isolated than homeschooling in another time, and know their experiences differ from those who homeschool long-term.

Land said because her children are young, teaching them was doable. If they were older, in high school for instance, Land doesn’t think she would have homeschooled them. The past year has felt more like a remedial year, Land said. Samuel has improved greatly in spelling and handwriting, and Oliver knows how to read when last August he didn’t even know the full alphabet.

“I’ve just been very impressed that they seem to have learned things from me, an unqualified teacher,” Land said. “I look forward to returning to more of a support staff role in my children’s education rather than being the one responsible for it.”

McElroy said the biggest challenge for her and Clint was reframing their idea of what learning looks like. It doesn’t just mean sitting at a desk. Having their daughters read the instructions on recipes and helping measure ingredients is learning, she said, and many other daily activities, like reading street signs, count toward learning, too.

Ruby and Eleanor learned empathy and life lessons through doing things they wouldn’t have been able to do if not at home, like foster a cat, McElroy said. And the year has been eye-opening in terms of identifying each child’s learning needs and where they may need extra support.

“I think that when they return to school, I’ll be able to be more in tune with that since I’ve been so intimately involved in them learning this year,” McElroy said.

While it’s still hard for McElroy to think about transitioning back to working in an office and taking her kids to school every day, the family is already prepping for that daily.

“I’m preparing myself at the same time when we have those conversations, like reminding myself we’re going to have to get up when an alarm clock goes off,” McElroy said. “We’re going to have a drive. We’re trying to get back into that headspace. And we’re definitely not there yet, but we’re working on it.”

Sat May 8 , 2021
“There’s a supply and a demand. We just need to connect the two sides,” he wrote in a letter announcing the group, which he said would resemble Teach for America, the nonprofit that recruits graduates to teach in low-income schools. “Our stated goal is to generate 100,000 U.S. jobs by […] 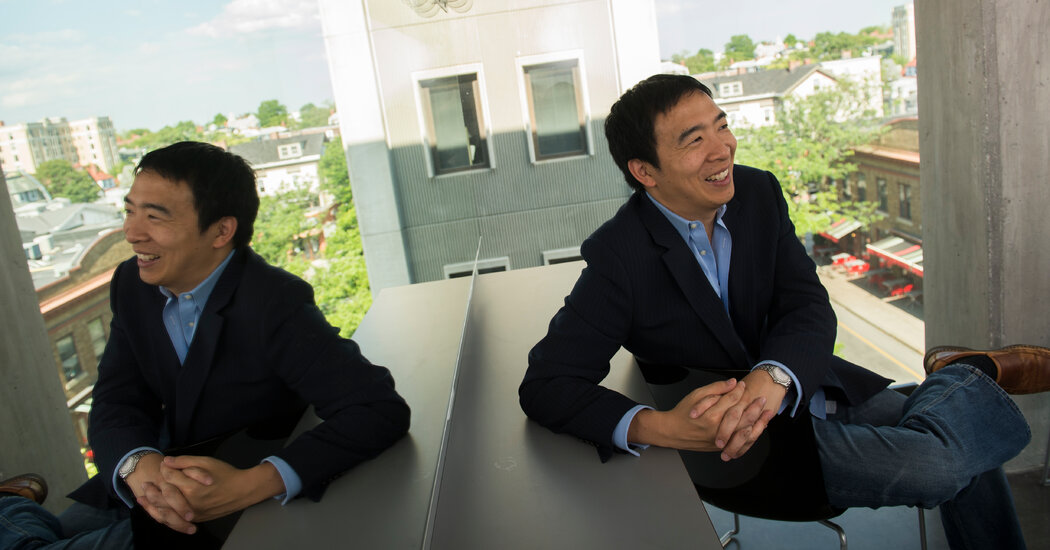