Have you heard that 2020 was a tough year? Well, it’s true … but people also did some amazing things, too.

For a dose of inspiration and optimism as we head into 2021, here’s a list of stories highlighting people and organizations using tech and innovation for good. This is one trend we hope will continue next year.

Seattle startup veterans Matt Lerner and Mike Mathieu saw a new problem arise with the shift to remote learning: teachers forced to conduct classes online with just a small laptop. They came up with a solution and launched Two Screens for Teachers, which aims to give instructors a second monitor to help make their lives a little bit easier amid the pandemic.

Since launching, the group has provided monitors for all of Seattle Public Schools and San Francisco Public Schools and demand is booming. Between November and December, the Two Screens for Teachers waitlist grew from 30,000 to 165,000 teachers. The group is seeking individual and corporate donors to help meet the demand, which amounts to more than $18 million worth of monitors.

“In the early weeks of 2021, we need the help of tech leaders across the industry to raise $23 million to address what we expect will be 250,000 teachers in need,” said Mathieu. “We’re not willing to write off the rest of this school year just waiting for a vaccine.”

As the situation escalated, Schiffmann’s site drew millions of visitors seeking the latest and most accurate data about the pandemic. His initiative and foresight made Schiffmann’s effort one of GeekWire’s top stories of the year. In November, Schiffmann tested positive for COVID-19 himself and called it “pretty terrible.”

3. The tech community turned up the pressure on racial bias.

As outrage and protests spread across the nation and social media after George Floyd’s death in Minneapolis in May, major tech companies issued statements of solidarity, startup founders spoke out about racism and investors announced funds dedicated to entrepreneurs of color.

Both internal and public pressure has kept the social justice drum beating, challenging tech ecosystem stakeholders to reflect on racial bias within companies, products and financing. The numbers show that since 2014, major tech companies have made little progress increasing workforce diversity.

But it wasn’t all talk:

Listen to more: ‘Racism is a pandemic,’ and this is how the tech industry can be part of the ‘vaccine’ (Part 1) and ‘It’s on us to dismantle racism.’ 10 steps tech and business leaders can take toward equity (Part 2). 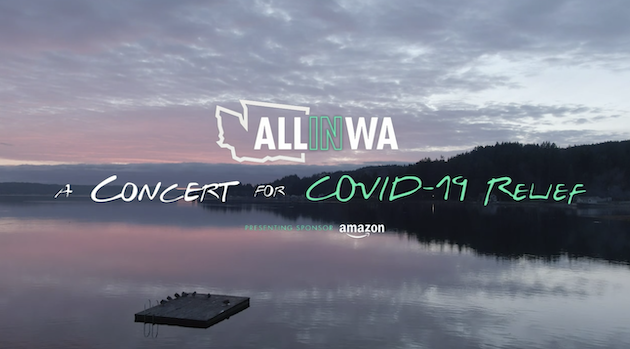 Tech, business and sports leaders across the Puget Sound region and Washington state came together through philanthropic initiatives such as All In Seattle, the COVID-19 Response Fund, and All in Washington to help fellow community members reeling from the health and economic impacts of the pandemic.

Microsoft CEO Satya Nadella and Amazon CEO Jeff Bezos backed a number of the initiatives both individually and through the companies they lead. The Paul G. Allen Family Foundation donated $1 million to the WA Food Fund and $1.2 million worth of personal protective equipment to healthcare workers in Washington.

The Bill & Melinda Gates Foundation, based in Seattle, has committed $1.75 billion to the global COVID-19 response including millions to health agencies, funds, and research in the Seattle region.

And the giving continues. Last week, Bezos pledged an additional $25 million in matching funds for All in Washington, which has raised more than $70 million to date. Earlier in December, Bezos’ former wife MacKenzie Scott announced her second large philanthropic gift of the year giving more than $4 billion to 384 organizations, some of which are in Washington state.

In January at a hospital north of Seattle, a man was treated for what was initially the first known case of coronavirus in the United States, with help from a robot. GeekWire’s special coverage of the coronavirus outbreak took off from there, followed by hundreds of articles about not just how COVID-19 was impacting the Pacific Northwest, but also how the innovators in this region are making game-changing contributions.

6. Kids continued to explore nature and science through virtual and in-person camps

This spring the scientists and parents running Seattle-based Oceans Initiative applied their marine mammal expertise in a different way through their Virtual Marine Biology Camp, which ran via livestream from March to May. Erin Ashe and Rob Williams expected a half dozen kids to tune in but instead more than 1,000 did each week.

While kids were stuck at home during school closures, they learned about orcas, sharks and marine life. Ashe, Williams, and their 6-year old daughter connected with a new community and discovered a new appreciation for how hard it is to be an educator.

In summer, the nonprofit Pacific Science Center successfully ran 10 weeks of in-person and virtual camps, with 1,500 kids participating in each format. The in-person camps were held at the spacious Seattle campus and three partner locations following safety guidelines including the creation of pods with a maximum of nine kids and one counselor.

There were no reported incidents of novel coronavirus spread among camp educators or kids, who attended the week-long camps for up to seven hours a day. A reprieve for parents and kids, Pacific Science Center’s success is a resource for other camps and schools.

7. Inspiring stories of entrepreneurship and “pivots”

The word “pivot” was pretty popular this year, to some people’s chagrin. By its business definition — when a company makes a fundamental change — it couldn’t be more spot on. This year demanded change from everyone. A number of entrepreneurs and startups had to make significant changes and their stories offered new insights and possibilities.