Every year there is some version of this remembrance on the internet, dated January 25th and full of science fiction references and doom-saying. This is the 2021 version. Today marks the 100th anniversary of the first use of the term “robot” to describe a non-human, artificial being. Today’s robots are built a bit different, but nonetheless, there’s history to be heard.

The robots as named in Karel Capek’s 1921 play R.U.R. (Rossum’s Universal Robots) are more similar in design and function to Star Trek’s Data than most of the robots that populate our factories or learn to jump at Boston Dynamics. Capek’s robots (a term he made up for the play) were molded out of a chemical batter and looked exactly like humans. They could do double-and-a-half time work, allowing their human owners to simply relax.

The play’s climax sees the robots killing all the humans.

Well, one human survives apparently, likely to learn the inherent lesson that would become a staple of science fiction for the next hundred years. Robots discover they are smarter and stronger than humans, therefore humans must be destroyed. James Cameron surely read this play. While “robot” would not enter the English language until 1923, the play put on in Prague in 1921 would set the stage for our perception of these automated machines.

How have we reacted to this original, terrifying perception of robots? We build robot dogs and kick them. Capek’s play supposed a level of artificial intelligence in his invented machines, a thing we struggle with today when it comes to advances in robots. Do we want robots, either in android-type form or otherwise, to be enabled with the ability to learn and think? Will they come to the same conclusion as Capek’s play? That humans are lazy, selfish idiots that need to be destroyed? Will they demand the same rights as humans?

“While the robots in the play take on a human form, it’s interesting to see that the technology is actually in use a century later,” says Anthony Macciola, Chief Innovation Officer at ABBYY, a digital intelligence company. “What’s also interesting is that the play focuses on AI ethics — or robot rights. Of course, modern AI ethics is focused on human rights and humans as technology consumers but it’s good to know that 100 years later this topic is still high on our agenda — particularly when it comes to personal data protection and information security.”

Perhaps it was this play and its early depiction of robots that influenced humans to consider their own rights before the rights of the machines they are building (hence why we can justify kicking them). We’ve seen many movies and television shows over the years that run a central theme of a robot discovering its individuality, usually being persecuted for it. The latest, Outside the Wire on Netflix, ended with a similar theme arrived at by a robot AI given the ability to make its own decisions: humans are bad, they must be destroyed.

Unironically, since 1979, the anniversary of the first use of the word “robot” is also the anniversary of the first human killed by one. It should be noted this was an accident, not a murder, so if anything it’s just an example of a convenient coincidence for story-telling purposes. Regardless, it has stuck as a thing that happened that ushered in a new era of safety protocols for automated factory robots, along with a healthy fear of them.

Science fiction writer Isaac Asimov wrote incessantly about robots, even creating the Three Laws of Robotics in 1942, still in use today by almost any science fiction property dedicated to such a topic. Even in Outside the Wire, there were loopholes used by the AI to skirt these rules in order to achieve its mission. They are ingrained in our collective psyche as known facts about robots. Yet, like the word “robot” itself, they are a fiction created by a creative person, that have become a standard way of thinking.

So one takeaway here is: read more science fiction. That’s where the future has always lay. You want to know what the robots will do next? How we should handle ethical AI in machines? Read science fiction. The answers are there. Just in the Asimov library alone there are dozens upon dozens of stories concerning robots and ethical decision making. Many of these stories are decades old, but still apply to our current arguments for and against AI in robots.

Where do we go from here? Our perception of robots, especially intelligent ones, has been cemented in our brains. That isn’t going to change. The next 100 years will realize some sea changes in robotics; we can expect intelligent robots hell bent on destroying humanity, if science fiction has taught us anything. Robots began in science fiction (as RUR would be considered) and that’s where we can look to figure out what happens next.

Some electric eels coordinate their attacks to zap prey

Mon Jan 25 , 2021
One Volta’s electric eel is scary enough. It can subdue small fish with an 860-volt jolt. Now imagine more than 100 of them swirling about, unleashing coordinated electric attacks. Such a sight was assumed to be only the stuff of nightmares. These critters aren’t actually eels. A type of knifefish, […] 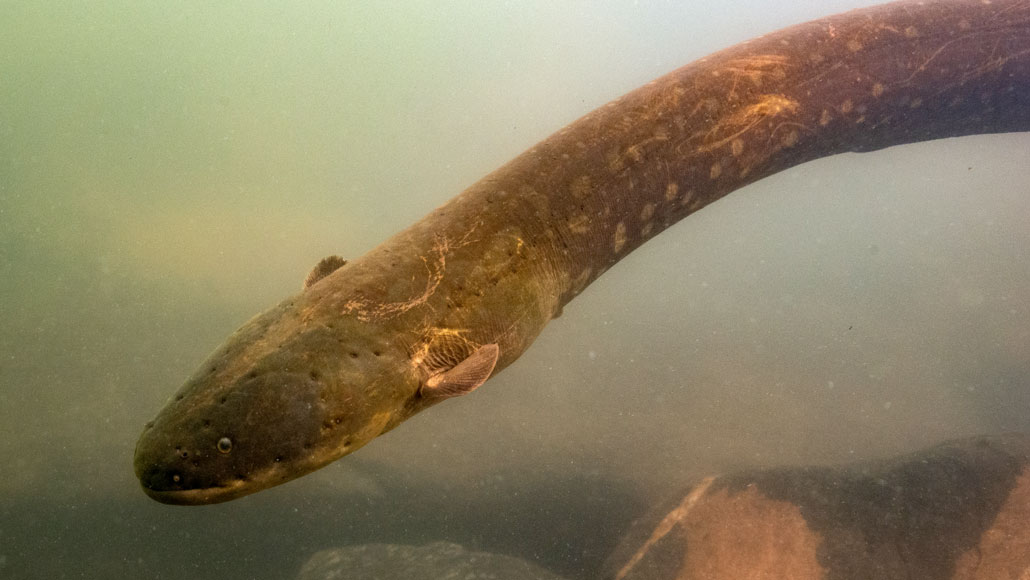